Bang for your Buck: Investing in Cards for Dragon’s Maze – Red

I realize the longer I take to put these articles the less relevant they become, but I can’t help it due to my current workload. It’s Sunday, and yesterday I took part in two Dragon’s Maze Game Day Events at different times. I got a chance to see quite a few more decks, as well as which ones were performing towards the top. Aggro still seems to be king, but control has been slowly finding it’s way back into the metagame. There has been a significant increase in UWR decks (like I thought there would be), and Bant decks also seem to have a large following. Today I’ll be covering red cards, so let’s get through them quickly.

Red was a lot of guesswork last time, but now that the type of decks in the metagame have stablized, I think it will be easier to gauge which cards will see play. Let’s get started.

I’m going to be much more conservative in my “guesstimation” of the cards this time. Truthfully, there is only one card from M13 that is going to see any more standard play before rotation and that is Thundermaw Hellkite. It was commanding a huge price tag a few months ago, but it has fallen to about $18 now. I wouldn’t say that this price is low OR high. I think it’s right where it should be. This would be a good card to pick up, but I don’t know if it would be a good investment or not. If it’s reprinted in M14, the price will go down, if it doesn’t get reprinted in M14 its price will go down as well I think. Damned if you do and damned if you don’t. My advice is to follow metagames and to keep an eye on the spoiler lists for M14. If it seems like there are some cards that would combo well with it, or cards that are going to revive past powerhouse decks like Naya aggro, UWR midrange, or BG aggro/midrange, pick them up, but be cautious. There is a good chance that this card will continue to drop in value. One card I’d like to see get some more play is Magmaquake ($.50).

Red control decks really seem to be in their own now. Jund (BGR), Grixis (BRU), UWR, and even RWB seem to have powered up after Dragon’s Maze. While I don’t think this is a great main deck card, I think it could be fun as a one off in a sideboard. It doesn’t damage players which is kind of a bummer, but against a midrange deck that’s using Garruks, Lilianas, creatures with hexproof, and other dangerous things, this card could take your opponent completely off guard. I don’t know how many times I’ve used a Blasphemous Act against an opponent only to have them repopulate the board with tokens afterwards. Not a strong suggestion, but something to think about. 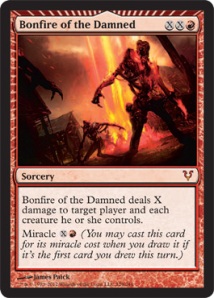 Bonfire of the Damned

Now is the time to buy up Bonfire of the Damned ($15) if you haven’t already. As I was saying before, I think it’s time for control decks with red to return to the metagame. We’ll be seeing a lot more in the near future. I’d expect some midrange decks to use it as well, and as the summer starts to heat up I think it’s price will too. I’m going to guess at least a few dollars appreciation before M14. Buy them now, then sell them a month into M14’s release and you could make a nice little profit. 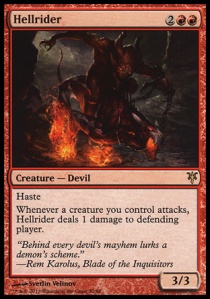 The Tibalt Vs. Sorin deck box has flooded the market with more Hellriders and pushed the price down to about $5, but this price drop is only temporary I think. Aggro will continue to get more aggressive in the coming months, and Hellrider will find his way back into the metagame thanks to Rakdos, mono red, and Gruul aggro decks. Who knows what M14 will bring, but so far, Slivers and Hellrider (along with the Hellrider Sliver) seems absolutely bonkers. I’d say get a playset now and then sell them before rotation in September/October. I don’t see too many cards in Innistrad that will see more play, and if they do (such as Stromkirk Noble), I don’t think they’ll see enough play to raise their price much. 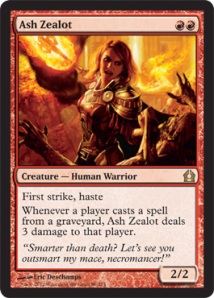 With BR aggro and WR aggro clawing their way back into the metagame, I think Ash Zealot ($2.30) will see another price increase in the future. As it gets closer to rotation her secondary ability won’t become as relevant, but a 2/2 first strike with haste will be. This is a somewhat strong recommendation. Only a few weeks ago when Naya blitz, GR aggro, and BR aggro were big, she was going for about $4. I think she’ll hit that again in the next month or two. Mizzium Mortars ($3.25) is another card to look our for, especially as cards like Bonfire of the Damned get closer to rotation and people look for possible sweepers, but wait and see if it drops to under $3 before getting a playset.

In Gatecrash, there are two cards I like: Five-Alarm Fire ($0.25) and Legion Loyalist ($2.50). Five Alarm fire is just waiting for  somebody to brew an aggressive deck that throws tons of creatures at their opponent, and with Slivers in M14 might just be the cards to do that. We’ll definitely get more aggro archtypes come July, and I think both of these cards would fit well in a Sliver deck. The question is, will the deck be constructed playable or just for fun. If it looks playable, then I think both of these cards would be good investments. Otherwise, I don’t think the prices will change much from what they are now.

Coming up Next on Bang for your Buck

In one more week my crazy work schedule will be a little less crazy, but I will be working hard to get another article out before the weekend for Green. I have both a Pro Tour Qualifier and a World Magic Cup Qualifier coming up next weekend, so it’s going to be rough. I feel good about my deck though, so I’m going to stick with my guns and keep tweaking it until then. Once these articles are done I’ll be back to reporting on the metagame and also talking about spoilers for M14. It’s crazy, but by the time I finish all of these articles and get back into things, M14 will be just around the corner! Thanks for reading and be sure to check back next week before Friday!

← Bang for your Buck: Investing in Cards for Dragon’s Maze – Black
Out for Blood at the World Magic Cup Qualifier →