Magic the Gathering Stores in Yokohama

The other month I was up in Yokohama for the Big Magic Open and while I didn’t do well at the event, I made sure that my trip wasn’t in vain. Besides the delicious BBQ food and refreshing beverages I had at the Baird Beer Bashamichi Tap Room, I also finally got around to checking out some of the card shops in the area. With both GP Kyoto and Pro Tour Kyoto coming up before the end of the month, I’m guessing that there are going to be a lot of people visiting both the Tokyo and Osaka area on top of heading to Kyoto. Well, if Tokyo is “old hat” to you and you’re looking to spend an afternoon searching for cheap cards or gems outside of the sprawling metropolis, Yokohama might just be the place for you. Located less than 40 minutes west of Tokyo by express train, the majority of stores can be found just outside of Yokohama station. 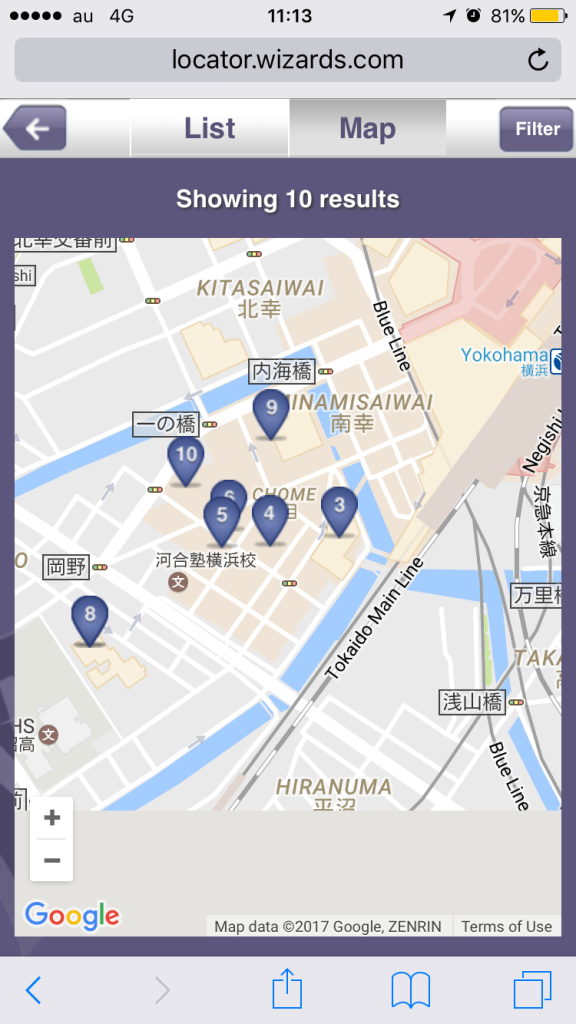 As you can see from this Wizard’s Locator capture, most of the stores in the Yokohama area are only a few minutes walk from the JR station. Today I’ll direct you how to get to the area, as well as give you a review of all of the places I visited while spending the afternoon in the city.

When you arrive at Yokohama station, look for the JOINUS department store, which is the area to the left of the station that you see in the map above. The department is right next to a bus terminal, so that should give you some bearings. Once you come out of the the shopping area, you should see a Police Box/Koban straight ahead, and located near it is another sign. You’re almost there. 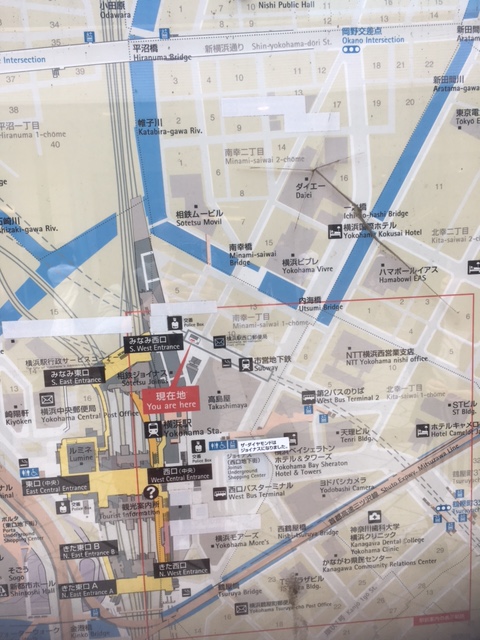 Once you reach this sign, you’re pretty close. Just go straight ahead across the Minami-saiwai bridge and you’ll be smack dab in the middle of the Yokohama station shopping district.

Once you cross the bridge, you’ll want to continue walking straight down this street. It will take you to the easiest to locate Magic shop in the area, Yellow Submarine.

(Moved closer to the station) 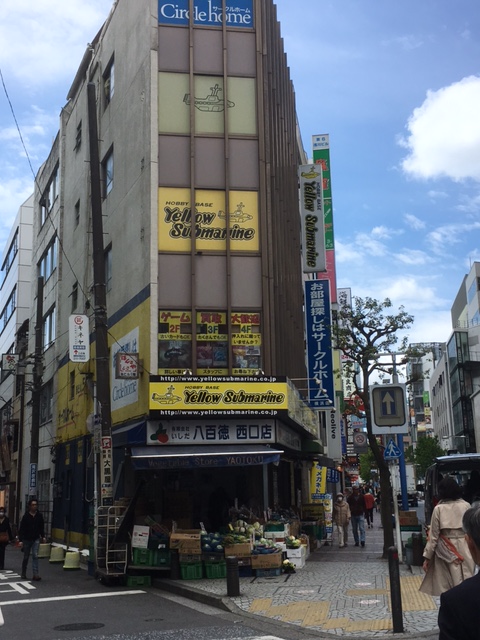 (EDIT: Their new store is much closer to the exit of the Sotetsu line on the main street in front of the Joinus department building. An updated article will be released at a future time with the updated info, but it’s pretty hard to miss. Right before a shoe store and next to Shakey’s pizza. On the 4th floor. ) 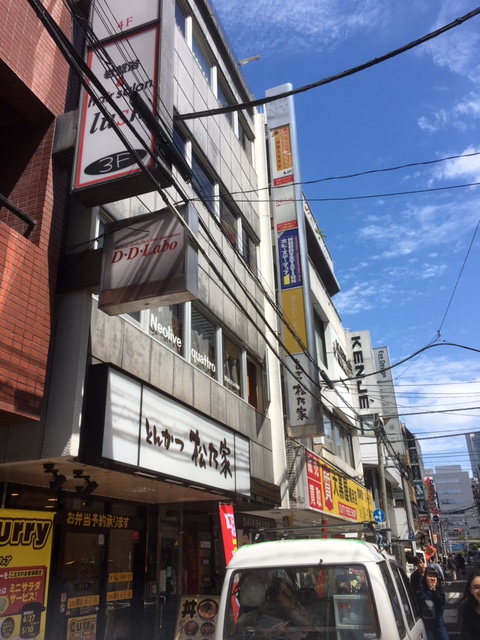 UPDATE 10/2020: Due to financial troubles caused by COVID 19, the store has closed along with a few other Hobby Stations around the Kanto area. 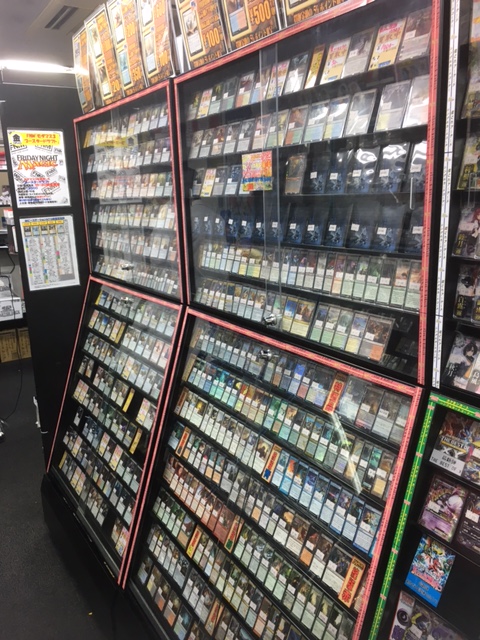 This store closed a few months ago, but I’ll keep it up just for the sake of LGS shop history (Edited 8/16)

To get to Full Comp, take a right if you’re coming out of Taiga, or a left if you’re coming out of Hobby Station. It’s located on the block next to where Hobby Station is, number 8, in the Bright Yokohama building. It shouldn’t be more than a minutes walk from either of those previously mentioned stores. You’ll see the collection of signs right outside of the building. 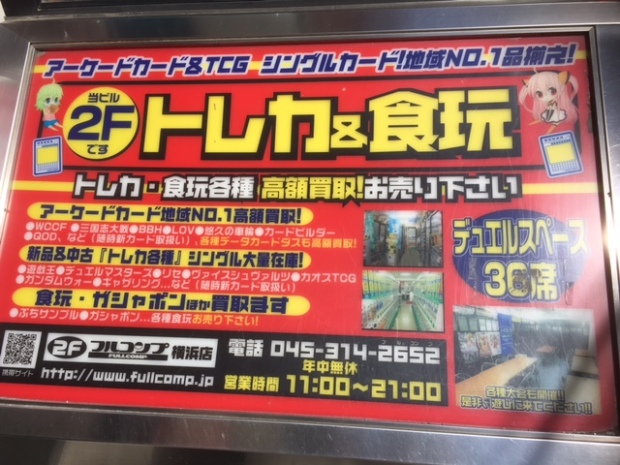 This is the sign for Full Comp, which is located on the 2nd floor. As we can read from this picture, there is duel space for up to 36 players, they are open until 9pm, and sell a wide variety of TCG cards (MTG isn’t mentioned but believe me you still want to check it out).

Once on the 2nd floor, you’ll actually see two different Full Comp stores. The first store has the MTG cards I believe. They are both well organized and have good showcases, 3 of which are dedicated to Magic.

The majority of cards you’ll find at Full Comp are from the eternal format, so if you’re looking for Legacy, Modern, or EDH cards then it will be one of best resources for finding what you need. While some of the prices are good, most of the cards go at the market rate.

As for tournaments, they only hold FNMs at the moment, and the play area is located in the adjacent shop.

(Moved a few blocks away)

(EDIT: New store was opened a few blocks north of the Full Comp and Hobby Station stores. Will be updated at a future time along with the new Yellow Submarine information.)

If you’ve read my other store reviews from the past or have visited the Shibuya area in Tokyo, then there is a good chance you’ve happened upon the MINT card store there which has a bar and tables where you can both drink and play Magic at the same time. Well, the store is actually a chain, and has another location in Yokohama as well in the Vivre department store located right after the first bridge we crossed from Yokohama station. On the city map, you can see it in the 15 block. It’s a rather tall building so it shouldn’t be too hard to miss.

Take the elevator or escalator to the 8th floor, and if you don’t see it soon, walk around and look for the Book Off store. It’s located next to it. Other than TCGs, Mint is actually one of the premiere shops in Japan to buy sports memorabilia. If you’re looking for baseball, soccer, basketball, or any other type of sports card there is a good chance they’ll have it. They have a fairly large selection of Magic cards to look through, but it’s mostly from Return to Ravnica block and after. There are some foils as well, but you’ll be looking at paying the market value as always most of the time on those and regular cards alike.

The store is very well lit and the play area has space for about 30 players and seemed to be more comfortable than the other cramped places I had visited during this trip.

Out of all of the stores selling Magic the Gathering in the area, I’d say that Mint is the best for playing. They offer events almost every day of the week, though most of them are either standard, modern, or draft. They are a fairly high level store though, which can be seen by the Grand Prix Trials and PPTQs they offer.

EDIT: The next two stores were not included in my original post because I wasn’t able to locate them before I left Yokohama. Fellow Cardboard Samurai Jose A., who lives in the Yokohama area was kind enough to snap some pictures and write some comments on the final two stores in the area.

Located in the same block as the Card Box store inside of the bookstore, and next to the supermarket, is Amenity Dream and MTG Shop Shinjintei. If you’re walking from the station you can turn right before the building where Card Box is then turn a left on the main street, or if you’re walking from Hobby Station you can just go down another block and turn a right on the main street. As you can see from the above picture, both shops are located very close to one another.

Amenity Dream is located on the 8th floor of the building with this sign on it, so prepare yourself for a long elevator ride. Once you reach the 8th floor, you’ll be able to easily recognize the main entrance.

Here’s what Jose had to say about Amenity Dream in Yokohama:

“Amenity Dream used to have a pretty competitive FNM crowd, but most of them moved to Mint. Nowadays Amenity Dream’s FNM is good for casual but sometimes it doesn’t fire. The great thing about Amenity is the card inventory. They have tons of old cards in stock from the competitive era of the store, both on display and in bulk bins. They also have a good selection of rares and mythics from the more recent era. New commons and uncommons are harder to find though. There are lots of good deals in Amenity. Chase cards have standard prices but niche cards get really discounted. The play area is big but sometimes crowded with people playing various games. The quality of the tables is lower than Mint though.” 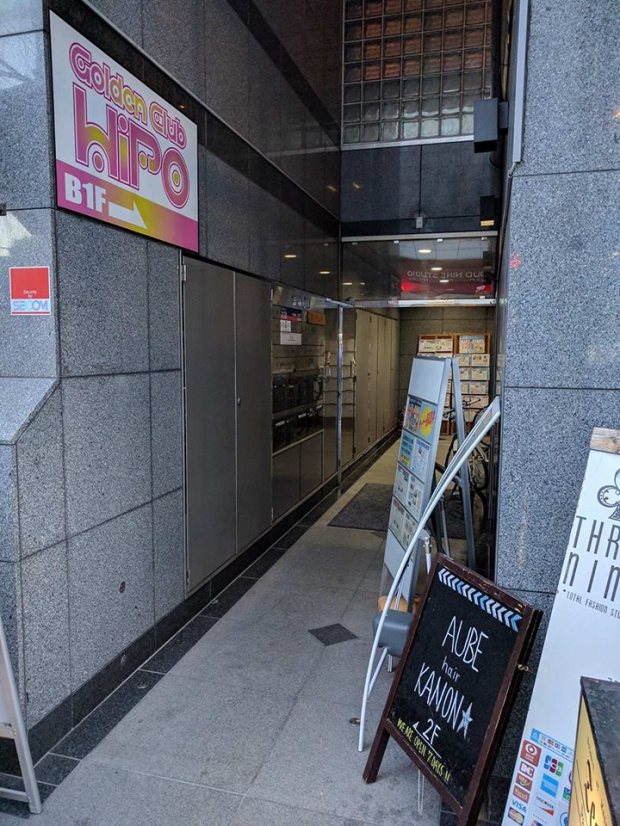 Shinjintei is in the building right beside Amenity. You have to go through a small hallway to get to the elevator. It can be easy to miss. Look for the sign above to make sure you’re in the right place. (It seems like it’s on the 9th floor from this picture, but I could be wrong. 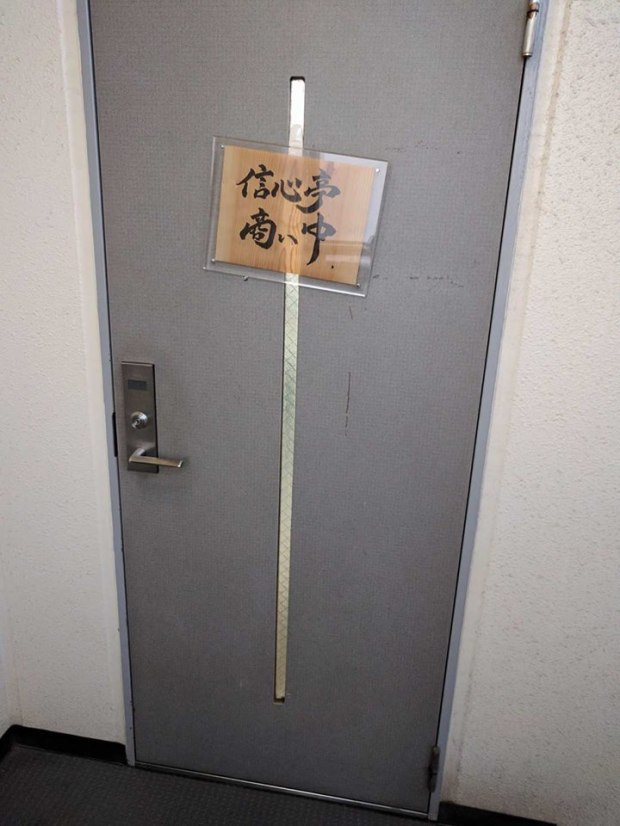 Here’s what Jose had to say about Shinjintei:

“Shinjintei is all about eternal. They have legacy and modern FNMs every week. It’s moderately competitive too. The prize structure is more top heavy to appeal to richer eternal players. The play area is big and the tables are nice.

The singles inventory is kinda sparse. They have rares and mythics from recent sets, and prices are pretty standard. Not many deals, but sometimes they sell playsets for an ok price.”

Yokohama has a nice, compact area for playing Magic the Gathering. If you don’t have the chance to regularly hit up one of the larger stores in Tokyo like Tokyo MTG, Hareruya, or Big Magic, Yokohama should be satisfied with the offerings in town. I would probably find myself playing at Mint most of the time due to their tournament schedule, but there are a decent amount of places to shop at when comparing prices as well. The area isn’t that big though, so once you orientate yourself, you should have no problem hitting all of the stores in a few hours.

Yokohama has some great restaurants and sightseeing spots as well, and isn’t as cramped as Tokyo either. It’s still a huge city (8 million people I think?), but much more manageable. It’s worth a stop during the next GP Chiba or GP Yokohama. If you’ve done the Tokyo thing already, consider spending a weekend in the city to see the sights and to check out some MTG stores on the side!

← Hour of Devastation – Playing To Your Weaknesses: Artifacts, Multicolor, and Land
The Japan Metagame Diaries: The Cat is Out of the Bag →

7 thoughts on “Magic the Gathering Stores in Yokohama”