Get in Loser, We’re going Boating

I honestly wanted to write more articles on Historic on Arena and talk about how I got up to Diamond in December and how I came so close to Mythic, but then I get slammed down over and over again by the same decks (Sultai) and the same cards (Uro and Shark Typhoon) and without the proper tools available in Pioneer I just couldn’t play anything. I tried the ladder, I tried the traditional Historic events, and I even tried free play with some fun decks, but everybody was playing the same damn thing.

I gave up. I could blame it on the lack of wildcards, the lack of dusting to get rid of multiple cards I don’t need, and the shallow card pool (Historic is still lacking about 3000 cards that are available in Pioneer), but that’s probably not the real reason.

I love Magic the Gathering but I want to have fun. I want to play decks that I can take to Friday Night Magic and have my friends smile as they sat across from me and watched me do wild stuff. I might not win the event, but I’d come close and enjoy doing it. I’ve never been one for playing the best deck. It’s both cost prohibitive and leads to burn out much more quickly from the grind. I like a challenge, and I like limiting myself so that I need to become creative. With Arena not offering a fun, casual experience, I have shifted my views back to Pioneer.

It started with watching more and more streams on Twitch, then led me to buying some MTGO tickets from friends to build some fun decks, and now I’m back on the Untap platform as well to play Pioneer as much as I can and test new cards before they come out. The Kaldheim pre-release is online next week but honestly I don’t care much about limited anymore. Without paper Magic and the gathering aspect I don’t want to play and explore the set. I just want to brew and play constructed, and oh boy Kaldheim has been an absolute goldmine for brewers so far.

Pioneer is a Brewer’s Paradise

I’ve heard countless people say this over the last few weeks as the Kaldheim cards were spoiled. I’ve always thought so too and believe the format is incredibly unexplored. You can say a format is solved and that there is a clear tier 1 and tier 2 ranking, but that doesn’t mean those are the only decks you can play in the format. We’ve only scratched the surface of the format. As a long time Frontier player before Pioneer was announced I can tell you there were an incredible amount of brews back then that never saw the light of day once the new format began. There are countless decks waiting to be built and games waiting to be won. All they need is a spark, and with each new set these decks have the chance to catch fire.

Click on this link to see the full decklist

Kaldheim seems to be a boon for countless tribes: Giants, Elves, Warriors, and even Dwarves. People love to say that in order for a deck to work and be competitive it needs to have x and y, and while that sounds correct in theory sometimes you just need to play it and work the deck out. I don’t know how many times people have told me my deck wasn’t good because they didn’t understand it and it was missing ‘x and y’ and yet I consistently put up solid results with it. I think RW Dwarves is one of those decks. 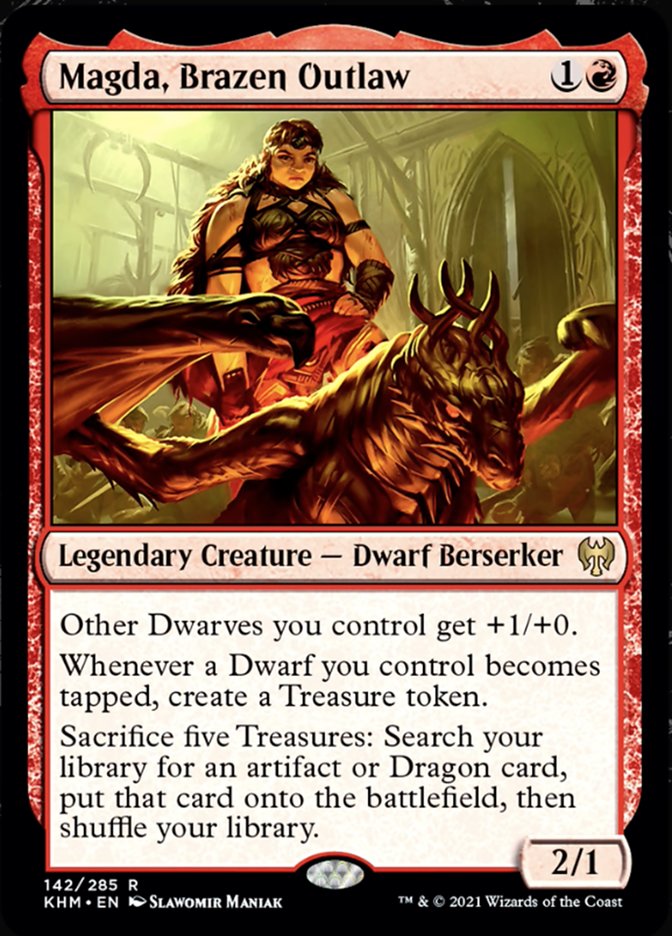 Magda, Brazen Outlaw is just the card Dwarves have needed to become relevant again. Once upon a time Mardu Vehicles terrorized many a standard player and the deck even continued to see play in Frontier after all of the Kaldesh cards had rotated out. But it was deemed too fair, too slow, and not explosive enough for Pioneer. Magda breathes new life into this archetype, not only by making Depala, Pilot Exemplar and Veteran Motorist more relevant to crew vehicles like Heart of Kiran and Skysovereign, Consulate Flagship, but also because she makes the dwarves themselves more dangerous, especially in large numbers. The more you crew or attack with your dwarves, the more treasure tokens you get, and the more treasure you get the more dangerous you become.

Magda knows the hustle and isn’t afraid to spend money when it comes to ordering quality support. Aside from giving all dwarves +1/+0 and making a treasure token whenever you tap a dwarf, she also lets you search your deck for any artifact or dragon and put it directly into play. This gives you an incredible toolbox function on top of an aggro deck which should put the strategy on the competitive map. Depending on the metagame you can play whatever you need, but for my first draft I’m focusing on being aggressive in the main deck and then getting technical with my sideboard.

Obelisk of Urd is a very straightforward buff for all of your Dwarves and even has convoke which is a built in money maker for Magda if you play enough of them before casting this. It’s also a good combat trick but probably not as crazy as dropping a Terror of Mount Velus onto the battlefield while attacking to give all of your creatures double strike. If you need the trample or the extra damage by all means choose Embercleave with Magda’s ability, but if your opponent thinks they can make smart blocks they’re going to be in for a rude awakening. Glorybringer also makes an appearance by helping you clear the board of a troublesome blocker if you play it before attacks. With the deck’s lack of interaction with opponents you’ll probably come to rely a lot on this hasty dragon, especially if Skysovereign’s 3 points of damage won’t get the job done.

I actually had 3 Obelisk of Urd in the first build of this deck, but in longer games I tended to run out of steam if I didn’t have a Depala to tap and look for dwarves and vehicles with, so I figured losing a little power was worth it if I could draw a card with something like Vanquisher’s Banner. Including this artifact, the deck has 9 total buffs for Dwarves, and the sideboard includes even more. The other notable includes in the main deck are 3 Conclave Tribunal as removal for just about anything (as well as having synergy with Magda), and 2 Mutavault that act as dwarves and get around pesky board wipes and keep the pressure on your opponent. One caveat though. I’m not sure if 22 land is correct, but the ability to create mana through treasure tokens and with a whopping 34 cards at 2 cmc or less I think we’ll be fine.

If you thought the mainboard was wild just wait until you see this sideboard. It’s highly experimental and will test the ability of Magda, Brazen Outlaw to the max, but if it works it could be genius.

I know that not all of these cards will end up making the final cut once all is said and done, but you gotta admit this archetype enables you to be incredibly creative with your card choices. Better artifacts will continue to be printed, and no matter how much they cost Magda will be there to steal them and throw onto your battlefield. I also expect Dwarves to get more playable cards in the Dungeons and Dragon’s tie-in set this summer so this archetype will only get more interesting. I’d also be interested in exploring a possible control version of this that just puts in tons of treasures and wins with cards like Hellkite Tyrant. Not sure that’s where I want to be, but I wouldn’t count it out.

Want to talk more about Pioneer? Want more deck ideas? If you’re hungry for content then come join my Pioneer Podcast Discord channel and listen to my cohost and I talk about everything Pioneer every week! Follow us on Spotify/Itunes/Podbean as well as on Twitter!

One thought on “Get in Loser, We’re going Boating”