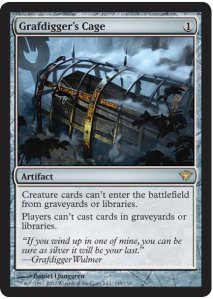 How is everybody’s deck handling the current metagame? I really thought my Titan’s Flame deck had the extra power it needed to dominate the games here in Nagoya, but on Saturday I went 2-2 at Hobby Station, and on Sunday last week I went 2-3 at Big Magic. Each of those losses were VERY close. I lost one game 3 due solely to Thrun (I ended up putting a Phantasmal Image in my sideboard after that), and two of the other losses were to FRITES decks. I handled one of the matches well with a well placed Surgical Extraction of Unburial Rites as well as another S.E targeting their Elesh Norn. But these aren’t the only decks that you should be worrying about. I’m not sure if the metagame back in the USA is the same, but you can be sure that many ideas from events in the USA get watched here in Japan and implemented. I believe everybody should be ready for these type of decks though. There are some great sideboard cards that everybody can use, and I quickly wanted to point them out.

Another totally underutilized card is Buried Ruins, a land from the M12 Core set. You can add one colorless, or for 2 mana and sacrificing it, you can return target artifact card from your graveyard to your hand. This will let you get one more use out of your Shrine of Burning Rage, Ratchet Bomb, Wurmcoil Engine, or Spellbomb (or Grafdigger’s Cage if it was destroyed!), and you can do it as a one off so doesn’t disrupt your mana flow too much. I totally recommend putting one into your main if you plan on running any of the above cards or other powerful artifacts.

The metagame will definitely change in the next week or so, but you can be sure that Undying creatures and Flashback will be sticking around. Get these cards fast!