Titan’s Revenge: Fighting against the Metagame

It was a harrowing weekend in Nagoya. After 5 days of matches, my WGB Token deck finished a middling 7 win and 11 loses. It started well enough on Friday. I came in 2nd place at Card Brunch, going 2-1 and getting a Dismember promo card. But that’s when the real challenge started. Saturday at Hobby Station Meitetsu Eki yielded a 2-3 record. Bad card draws and poor sideboard decisions were already starting. Day 3, Big Magic on Sunday. Another 2-3 record. BM has some of the best players in Nagoya playing there though, so it’s not so bad to finish 2-3, but still I wasn’t happy with the results. Day 4, Monday Night Magic at Card Brunch. I finally beat my nemesis who was using GR Beatdown and had beaten me 3 weeks in a row, but lost the next two for a 1-2 record. And finally tonight, Tuesday. A beautiful day outside which I enjoyed, and then in the evening I was utterly devastated by a Solar Flare and a UB Heartless Summoning deck. 0-2.

Here’s a snapshot of what people were using this weekend.

If you put the variants together, these were the most popular decks in the metagame in Nagoya, Japan.

7-11. That’s it, no more mister nice guy. I know I said that I was going to let the Titans sleep, but I have a mission. I will control these top decks and come out on top.

So here’s my idea on how to take out that damned GR Kessig Beatdown deck.

Burn it all. Nobody will survive. Before it was just the Inferno Titan, but this time, he has some help.

He likes to burn things 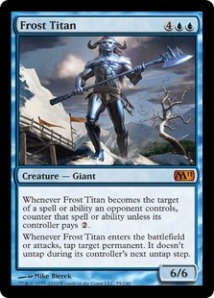 So GR Kessig Beatdown decks and Birthing Pod decks are the big decks right now, eh? Giving everybody headaches just like Spirits were back in February, right? How are we going to deal with them? Well, let’s start with the sideboard first. This deck has been streamlined for maximum efficiency and will either lock down your opponent or burn them to a crisp.

(EDIT 4/23 – GR hasn’t been that popular lately, so I took the Spellskite out of the main deck. The Shrine has already won me a few games, and is definitely needed against control decks. Mimic Vat is great against Pod and undying creatures, but can slow down the game if played on the 3rd turn when a Phoenix or Lantern Spirit would be better.)
Pretty strong so far, right? With only the sideboard, we’ve already shut down about 60% of the decks in the current meta game. So what about those other decks? Like Heartless Summoning, Humans, etc? Well, like I said, let’s burn it all.

(Edit 4/23 – Tezzeret’s Gambit is out because the proliferate is useless and speed is more important than the cost effectiveness of card drawing. Think Twice is back in.)
Like I said, burn it all. Hold back nothing. People are going to have creatures. Aggro is huge in this metagame. Whomever gets the creatures out the fastest usually wins. Go ahead and bring out your Mirran Crusaders, your Spirits, etc . . . they will die in flame. The Whipflares and Slagstorms should keep your board clean while you build up towards 6 mana. The Galvanic Blasts are great ways to take out a Birds of Paradise first turn, and can always be flashbacked later in the game with Snapcaster Mage once you have 3 artifacts in play. Ponder is a must, as well as Negate. With so many people playing with Planeswalkers and Artifacts, Negate will be a nice way to halve their power. You can deal with creatures, but other things can give you a headache.

(Edit: 4/23 – Karn in because he can get rid of the really annoying threats like O-rings, or take a blocker out of the game and clear a path for the Frost or Inferno Titan.)
Not a lot, but it’s quality over quantity here. Spellskite is a great way to redirect that Wolfrun or O-ring, and survives just about every kill spell except for doomblade, and when was the last time you saw that being use commonly in Standard? Batterskull is a good way to gain life, and also looks great on your Titans. Mimic Vat can slow down those undying creatures in Birthing Pod decks, as well as holding Zombies until the next one comes along to take it’s place, not to mention it lets you attack with it each turn. And Chandra’s -2 is a great way to conserve those Whipflares and Blasts. Her plus one is a great way to get back your Phoenixes as well, which leads to the next part.

(Edit: 4/23 – Lantern Spirits in because they can  block almost anything without trample, as well as survive a board wipe like Day of Judgment or Black Sun’s Zenith with the cost of 1 blue mana.)
Why have the Phantasmal Image in the mainboard? Well, aside from the obvious targets of the Inferno and Frost Titans, Image also looks great when imprinted on a Mimic Vat (in fact, any of these would be great in a Mimic Vat). Thrun, the Last Troll and Elesh Norn are also seeing heavy play in these top decks, so it definitely wouldn’t hurt to have Images in the main. You’re also probably wondering why the Frost Titan is in here instead of the second Titan. This is all due to Wolf Run, Inkmoth Nexus, and Birthing Pod. You get this bad boy out, and suddenly your opponent is in big trouble.  By the 6th turn in the game, the board should be clear, their counterspells should be gone, and your Titan’s should be ready to come out and play.

Let’s see an optimal hand to start with. 1 Island, 1 Mountain, 1 Sulfur Falls, 1 Ponder, 1 Galvanic Blast, 1 Mana Leak, 1 Chandra’s Phoenix. This would be a very awesome hand to start out with. You could lead with a mountain to blast a Birds of Paradise, or an Island for a Ponder. Second turn would stop them in their tracks with a mana leak, and by the 3rd turn you’re dropping the Phoenix for a quick 2 damage.

So what do you think? Definitely has potential. It’s consistent, powerful, and also accounts for many different contingencies. I urge you to test it out. In all likeliness decks like UW Delver and GR Beatdown will remain popular until Avacyn Restored comes out, but I definitely think that this deck will give both of those decks a run for their money. Try it out and let me know what you think! Thanks for reading, and good luck!

9 thoughts on “Titan’s Revenge: Fighting against the Metagame”