First off, thank you for staying with me this long and reading my opinions about which cards are the best commons/uncommons to use in your constructed deck. Like I said before, there are some great rares and mythic rares out there, but you can’t count on getting those cards in the 6 packs you will receive. You should be getting your ideas by looking at the uncommons and commons in the set, and see how they have synergy with each other. Personally, I think WR Humans/Angels are the way to go, but it will depend on the cards you pull. Without further ado, here are the last two colors: White and Gold cards. 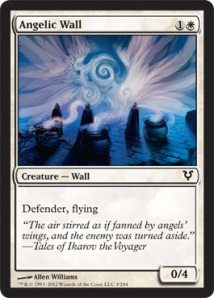 Blockers will be invaluable with the number or flyers and other aggressively costed creatures out there. This  wall will block 70% of the creatures in the set, and if you slap a +1/+2 aura on it, it will block most Angels as well. It’s cheap, it flies, it will be in my deck.

Again, it’s cheap and gives flying. You can have a 2/3 flyer on the second turn that will not be killed be a Righteous Blow or Pillar of Flame. With a few of these you can take control of the game rather quickly. 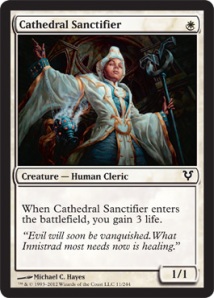 It’s a 1/1 for 1, and you gain 3 life when it enter’s the battle field. This card works great with Cloudshift or any other “blinking” card that white and blue seem to have. If your playing with a Tamiyo in your deck and a few Cloud shifts, you can block for her, Cloudshift it so it doesn’t die, then do the same thing next turn. By the time Tamiyo is ready for her ultimate, their creatures are tapped out, and you are up 6-9 life. Gotta be careful of trample creatures though.

I will be running 4 of these in any white non-token deck after the pre-release. The fact that you can declare a blocker, then shift it so it doesn’t take damage is a great ability. You can also use it to reactivate an enter’s the battlefield ability. I’m also not sure on the ruling, but if you use it to save the creature from a “destroy” ability, the first effect might fizzle, leaving the creature safe. Like I said, I’m not sure so check with a judge about this.

Just adding to the beatdown

The high cost kind of sucks, but if you’re playing control with Tamiyo and have lots of cloud shifts and abilities that return creature’s to other player’s hands, then this can quickly work in your favor. Probably not a card you want in your opening hand, but it can work to your advantage if you are playing a long game.

I wouldn’t mind running 2-3 of these in my main deck, because most people are going to be using creatures in the pre-release. This would also have good synergy in a Tamiyo deck or control deck where you need to buy time to build up your defense.

This will give people a lot of headaches

A 2/4 lifelink flyer for 4 mana doesn’t die to a lot of things. Not only is she a great blocker, but she’ll keep you alive against smaller creatures and with an enchantment here or there she’ll be able to block her Angel friends too. Lifelink is great to have at pre-releases.

For the last part I’m going to talk about the rares that will go a long way in helping you to win some matches at the pre-release.

A great counter to a Bonfire of the Damned. They suddenly hit you and all your creatures for a 3 point Bonfire? Pay 4 and suddenly the tables are turned. If it’s later in the game and and they are swinging all in, this could win the game for you. I like this card, and it would be good to put in your deck. 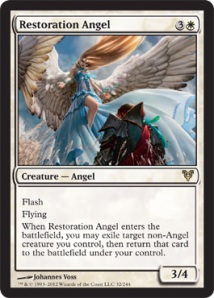 One of the best rares in Avacyn

It’s a cloudshift+ a creature. This can work in a variety of ways. Save a creature from dying to a big attacker, switch it in reactivate an “enter’s the battlefield” ability, or land a surprise block against at 3/3. This card would work great with Soulbound cards too.

The baddest angel of them all

While the other angels are awesome, I think Gisela will give you the biggest bang for your buck in the pre-release. First off she has first strike. This will kill most of the other Angels. She also deals DOUBLE damage to players AND their permanents. Somebody is blocking with a 7/7 Griselbrand? If I read it right, she’ll deal 10 damage to that Griselbrand (but will it only be 5 first strike damage and 5 regular?), and she’ll take 4 damage from Griselbrand since damage is HALVED to your permanents. I really hope I get her in a pack. 7 is a high price to pay,  but with 2 white mana a lot of humans, and a Battle Hymn that adds red mana to your pool for each human you have, she can come out to play earlier than you think.

Well, this ends my opinions on the commons and uncommons you should be playing with during the pre-release/launch day/game day. I wish you the best of luck and hope you get some awesome cards from your booster packs. While you might not be able to pull off any of these combos, hopefully you’ll be able to think of some other good ones that will win you the game!