I’ve finally come to realize while they call it “Cavern of Souls”. All of those blue mages out there that die when a big creature hits the field and they can’t counter it end up in that cave. I found myself there more times this last week than I’d like to count. 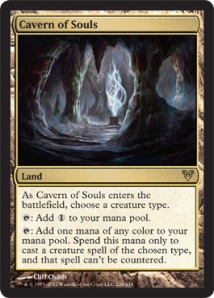 It was an absolutely miserable week for me and my UR Control Aggro deck. On Monday I went 0-3 at Card Brunch. The last game was humilating. I played against a 5 color Heartless Pod deck that used this card. It was late in the game, and he chose the Cavern for “humans”,  played Zealous Conscripts, then used a Primal Surge when I was tapped out and brought out 4 Phantasmal Images, 4 Phyrexian Metamoprhs, another Conscripts, and with a Elesh Norn and two Heartless Summoning in play, he attacked with everybody for 30 damage and killed me.

Friday I went 1-2, seeing more Cavern of Souls but trying to get around it by siding in more red to deal damage directly. Couldn’t do it fast enough. I did pick up a Desolate Lighthouse and a Devastation Tide in trade though. On Saturday I went 1-5 at Hobby Station Osu, with my only win coming from a bye. It seems like no matter what I did I just couldn’t keep up with my opponents and deal enough damage fast enough. I ended up getting one more Devastation Tide from my friend afterwards, and he helped me to totally retool my deck.

I went 1-4 Sunday at Big Magic, but I feel like my deck will be better prepared for future tournaments. Cavern of Souls was in almost every deck at Big Magic today. Having Mana Leak in my deck was absolutely pointless. I saw it with Humans, Zombies, Spirits, everything . . . I’m not waiting to side out my Mana Leaks, I’m taking them out NOW.

Mana Leaks are not what control players want to be using anymore. What has become important more than anything is board wipes. Kill everything on the board as quickly as possible. If you’re a control player, then stick with your Day of Judgements, Bonfires of the Damned, Devastation Tide, Black Sun’s Zeniths/Killing Waves, Terminus and whatever else can do massive amounts of damage to the other player’s creatures or take them out of the game. Pinpoint counterspells like Manaleak are all but worthless in a long game. 2 Mana leaks a Negate, and a Dissipate will be a better combo for a main deck. You’ll still want to counter their artifacts and enchantments, but you should think about something else for creature removal.

Here’s what the metagame looked like last week in Nagoya:

Pod decks made a comeback this week thanks to Soulbound creatures, and GR Kessig Beatdown came back with a vengeance. Wolf Run didn’t change too much with Avacyn Restored cards, but I did notice some Wolfir Avengers as side board cards against control. They’d flash them in at the end of the turn, then whittle you down if you were running control, always keeping that two mana available for a regenerate. I also saw a lot of Bonfire of the Damned and Zealous Conscripts in the sideboard of GR beatdown decks.

Where do I see the metagame going in the next week? Well, I think we’ll see more diverse decks as people try to rework their decks from this weekend. We’ll see responses for the Cavern, more cards that clear the boards, and heavier hitting combos. I think there will be an even 50/50 split between players using control and aggro next week. There will be more Esper control, Planeswakers Control, Junk Walkers/Superfriends on one side of the spectrum, while Pod, GR Beatdown, and Human based decks will increase on the other side.

But the card that definitely changed the metagame this week was Cavern of Souls. It seems like Magic doesn’t want people to play with counterspells anymore which for me is a very sad thing. I’m a control player at heart and now that 90% of the decks in Nagoya have this card, I feel like I’ve been forced to play a certain way instead of playing the way I want to play. I do NOT see this card leaving any of these decks until it cycles out in the future. But I’ll make it through this. Just because I can’t counter a Titan or a Geralf’s Messenger anymore, it doesn’t mean I can’t counter their Swords of War and Peace, Mortarpods, and make damn sure their miracle doesn’t resolve.

I recommend that all of you Esper Control, Blue/Red control, Blue/Black Control, and any other control deck players out there come up with your own strategy to combat this card. For starters, Tamiyo and Frost Titan will be your biggest supporters in stopping this card. Like I said in a previous post, White/Blue control will be really powerful in this format. A few Day of Judgments, Tamiyo, Frost Titan, some Tandem Lookouts, and 4 Ghostly Touch would be a good start in bringing control back to where it was before. Once you take care of that land you can use your counterspells again. At the moment, I can think of no other option if you are running blue/X control other than putting 4 Ghost Quarters into your main deck.But if anybody else can come up with some better solutions, I’d be happy to hear them.
Before I finish, I wanted to link you to my second article at Star City games if you’re interested in reading it. It’s from the previous week in Japan, with another deck idea from a Japanese player I know. Check it out if you want.

Thanks again for reading and I’ll be sure to put out another update in a few days.

One thought on “The Japan Metagame Diaries: Misery loves company”