Avacyn Restored: The Good, the Bad, and the Glorious (an article by Chris Bradford)

Today on The Japan Hobbyist, we have a guest columnist giving us his opinions about the Avacyn Restored set, and how he thinks the cards will affect the different formats in the future. Chris Bradford is also currently living in Nagoya, and has been in Japan for 1 and 1/2 years. He’s been playing Magic since 1993, and has some professional experience, placing in the top 50 of GP Toronto during the Ravnica block, making it to day 2.

For your reading pleasure today . . .

Avacyn Restored: The Good, The Bad, and The Glorious

Avacyn Restored has been released for a couple of weeks now and we have had a Pro Tour using it for block. Ryan (The Japan Hobbyist) has also been talking about how Avacyn has crept into the standard metagame in Nagoya. This is just the tip of the iceberg though. I want to talk about the future of some cards from Avacyn and what you should be watching out for when trying to price up your deck over the next few months.

First off we can`t ignore the elephant in the room, Cavern of Souls.This card is sitting at 3000-3500 yen in Japan right now. It won`t be going down in price……ever. Expect it to only go up in price. If I had the money I would be investing in this card over any other card in Avacyn. I would sell off all those expensive miracle cards I pulled and start buying these up or at least trade heavily for them. This card is the Tarmagoyf of this set. It will be played forever unless wizards trips up and makes the mistake of printing a better land for creatures then this. This card is an auto include in any deck that has a theme, humans, goblins, merfolk. This card is even good just for those decks looking to drop a finisher that can`t be countered. There is absolutely no downside to running this in your deck. Comes into play untapped, CHECK. Gives me any color mana for the creature type I choose, CHECK. Makes those creatures uncounterable, CHECK. This is a major headache for any deck packing counterspells. Instead of being able to sneak a counter in on a creature early you are stuck using up your removal on stuff that can whittle your life down into kill range instead of being able to stall a bit with a mana leak or remand or force of will. Expect this card to hit 5000 yen in Japan as it gets played constantly in all formats from now on.

The Miracle mechanic is my next topic of discussion. Top decking for the win has been a long time tradition in Magic. These cards are just basically super top decks at any given point in the game. You may think the odds are really high for these cards to be top decked, but if you put the appropriate number in your deck it is just an inevitability that one will be your next draw.

When playing against them, essentially you are only ever 1 card away from having the game be a total blowout in your opponent`s favor. Your only hope is to put them in a position where one of these cards won`t completely ruin your day. It is not luck that one of these cards will be on the top of their deck, just inevitability and each of these cards has a pretty big influence on the game when they are cast. 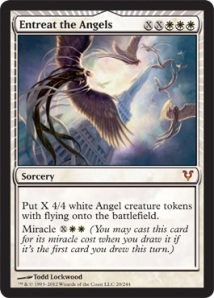 Entreat the Angels currently can be found for around 2000\ in Japan. This card lives up to the hype and should sit around 2000-2500yen for a while. It is still good as a hard cast spell or miracled up. 7 mana gets you 2 4/4 angels on a hard cast or 7 mana gets you 5 4/4 angels on a nice miracle top deck. It is just too good and halts aggressive decks and provides a threat from turn 4 on if miracled into play.

Bonfire of the Damned can be currently found at 2100yen. Another great miracle card that can be good when hard cast and just abusive when miracled. Don`t expect this to drop in cost either.

Temporal Mastery can be found for around 2800 yen currently. This miracle is a great miracle, but not as much in standard as it is in other formats. It being mythic will help it hold its price, but I expect it to drop in price. It should probably settle around 2000 when people realize that most of the time it is just an Explore in Standard. There just aren`t any combo decks in Standard that can abuse this yet and from the looks of things Wizards is trying to crush combo in Standard from the looks of the last few years. 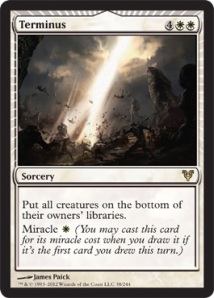 Terminus can be found for around 700 yen. Hallowed burial for 6 or 1 mana depending on when it is drawn. Great against anything that uses the graveyard and still reasonably costed enough to be hard cast. I expect this to probably drop a little in price and settle around 500-600 yen. I prefer the speed and reliability of Day of Judgement currently, but putting a couple of these in place of Day may be a good call in this format.

Devastation Tide is around 400-800 yen depending on where you go. I think this card just isn`t given the credit it is due right now. I don`t think you are going to see a big cost increase or decrease since it is a good card miracled or not. For control it`s a great reset of the board early game, but the thing hurting it is that by late game it is a dead card, unless you are getting rid of those entreated angels that your opponent just miracled in.

Other things to watch for are: 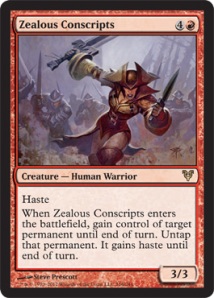 Zealous Conscripts: 750 yen. This card has found it`s price range already and should stay around here for a while. I got lucky and got mine at 105 yen when everyone was hyped over everything else the first couple days.

Restoration Angel: 800 yen. This card is amazing. I think it should go up a little bit. People are figuring out how to break this already. I expect it to hit around 1000-1200 yen

Silverblade Paladin: 600 yen. Another great card. Expect big things from this when Mirran Crusader leaves standard. Great with our friend Restoration Angel. I think it will hit 800 yen after a few more months.

Vexing Devil: 1800\. He is a good card, but not 1800 yen good. He just doesn`t have a home right now in Standard. That and giving your opponent the choice is not always the best thing. Most of the time he will say deal 4 to your opponent for 1 red. I expect it to drop a little to around 1200 yen.

Tamiyo: 3500 yen. She is going to sit at this price through all of standard. She is good.

Tibalt: 800 yen. He has no home and people are turned off by that random discard, but I think he is better then the 800 people are asking for him. He forces you to play a bit differently, but he might see sideboards for play against control with some aggressive red decks.

Sigarda: 1300 yen. She is going to go up in price. She is just really good. Flying, hexproof, and your opponent can`t make you sacrafice things or can`t pay life for things and only 5 mana. I would say 2000 yen is where she should top out at.

Misthollow Griffin: 400 yen. This card is just waiting to be broken somehow. It can be a real pain to deal with and there are enough ways to remove him from the game yourself if he hits the graveyard to just keep playing him over and over. Maybe will see 700 yen.

Griselbrand: 900 yen. I am running this guy in reanimator and I love to pop him into play anytime I have enough life to pay 7. He can be abusive in the right deck. He is going up a bit. 1300-1500 yen card.

Gisela: 800 yen. She is good but only really great in reanimator because of the casting cost. She will stay around this price because she is an angel.

Bruna: 500 yen. Sorry someone has to be the worst angel. You are it Bruna. Fun for commander and that’s it. It will stay bargain bin pricing.

Avacyn: 1000 yen. I have toyed with her in reanimator and she just doesn`t make a huge impact when she hits the board. There are too many things that remove from the game anymore. She might drop a bit, but unlikely much because she is an angel.

These are my personal opinions on what will go up and down in the area just based of play testing things and the potentials for things. Good luck with your deck building!

(If you’d like to write an article about Magic in Japan, or other various hobbies that you partake in in Japan, please leave me your email and I’ll get in contact with you (and delete the email from the website as soon as I have made contact.)

5 thoughts on “Avacyn Restored: The Good, the Bad, and the Glorious (an article by Chris Bradford)”