Avacyn Restored Game Day is over. How did everybody do? I had to work on Saturday so sadly I didn’t have a chance to do an event on each day, but I still had a good time. I went back to my UR Titan Control deck, which I’ve changed since 3 weeks ago. My friend Chris helped me to rethink my strategy a little bit, and while I’m still working out the problems, it’s a lot of fun to play with. If it wasn’t because of my horrible luck, I would have won quite a few games! The full report will be posted on Star City Games sometime this week or next, but until then I’ll share my deck list with you. 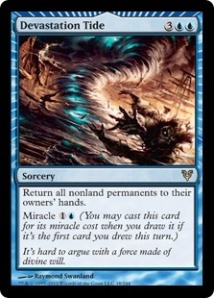 Gone are the Thunderous Wrath I had before, as well as the Galvanic Blasts. I don’t care about the speed anymore. What I wanted was something that could get rid of a creature for good. 4 Pillars and 3 Red Suns will do that. They takes care of undying creatures, and also stop “dying” abilities from activating because the creatures never die, they are exiled. There is a lot of card drawing in here too which is a must in this metagame. By far, my favorite card in this deck is Devastation Tide. The Tides are a lot of fun to play with, especially against token based decks (Esper Control, Entreat the Angels decks). I wish I had one more just so I could be a pain to my opponents. I also went down to 3 Mana Leaks and put in a Dissipate instead. This is great if the player is using bothersome card like Unburial Rites where you don’t want them to use flashback.

This has really changed since my previous UR deck. Gone is the Archwing Dragon and 3 Chandra Phoenixes. The Zealous Conscripts are exponentially more useful in this metagame, letting you steal anything and use it, and Dungeon Geists are like having having 2 more Frost Titans (albeit smaller and only able to tap creatures). I added in another Inferno Titan as well (I did have 3 before I decided to add in the Geists though). The idea of the deck is to wipe the board or counter things for the first few turns, and then letting the Titans come out and destroy everything later. It’s great. And with Devastation Tide, Oblivion Rings are no longer a problem. You can reset the board then use your Snapcasters again, choose a new target for your Dungeon Geists, and then burn them with Titans the following turn.

I believe this has changed as well since last time. The Grotto can make black mana for Surgical Extraction, as well as green for the Ancient Grudge flashback. The Hinterland Harbor and Rootbound Crag will also help with flashing back. The Ghost Quarters were added in to deal with Cavern of Souls, and the Desolate Lighthouse is great to have later in the game against control decks when it gets tougher to draw cards.

(EDIT: Took out Slagstorm, Grafdigger’s Cage, and Spellskite. Slagstorm is out because my Dungeon Geists and Zealous Conscripts can survive a Whipflare, but not a Slagstorm if I have to clear the board of smaller creatures. Grafdigger’s Cage has been underperforming lately, and I’d much rather have a bomb against UB control or Frites than a Cage. I also took Spellskite out because I don’t need to worry about Kessig Wolf Run anymore now that I’m running 2 Ghost Quarters main. The extra Devastation Tide is great against Esper Control and just about every deck. They might be able to get their big creatures out by turn 5, but then I can return all permanents to their hand and then counter/take control/tap out anything they bring out out afterwards.)

I’m actually planning on changing this a little. I’m going to take out Slagstorms altogether and just have Whipflares so that my Dungeon Geists and Conscripts can surive while I burn away small armies of tokens or mana producing creatures. I also want to take out Grafdigger’s Cage because it’s been underperforming a lot lately. I’d rather just have a 3rd Surgical Extraction in the side. I also don’t want Snapcaster to be Hampered by not being able to flashback anything.

Jace is the big change. He’s great against control decks, especially Esper Control. He’ll survive against Day of Judgements and just keep milling the player into oblivion. Once you take out their counter spells and Lingering Souls, they lose a lot of power. Karn is still necessary I think (against enchantments), and Spellskite is still nice to have against GR Wolf Run decks. But with Wolf Run decks losing popularity in Nagoya at the moment, I wonder if I should put another Ancient Grudge in instead.

Well, with this deck I ended up going 1-3, but each game was really close. 1 went to time and I lost on a technicality, another one I lost to the player top decking 3 Temporal Masteries in a row after stealing his Tamiyo and using her ultimate ablity, and the last one went down to the wire as well. Here’s what most of the players were using at Card Brunch for Gameday Avacyn in Nagoya, Japan.

I didn’t finish in the top 8 of course, but I still had a good time. The WG aggro deck ended up winning it all, but two of my friends finished in the top 10. For a full break down of my matches, look for my article at Star City Games next week (hopefully!) If it doesn’t end up getting posted, I’ll put it up here.

In my opinion it was a very healthy metagame. There was a lot of deck variety and the players who prepared to play against just one type of deck were the ones that did the worst. Doing something that other decks don’t do can give you an edge, especially when the player sides in different cards for game 2 and game 3. I’m still kinda of disappointed in the metagame back in the USA. There seems to be no innovation and the top finishers continue to be UW Delver, a Kessig Wolf Run deck, or a Pod deck. I say always keep them thinking!

Today’s post might be a little short, but I have an awesome deck idea I’d like to share with you later this week and as soon as I finish putting it together I’ll post the deck list. It’s a fun deck that is great against Pod and token decks, and you can actually win by just killing your creatures! Hehe, I’m sure you’ll enjoy my BR Suicide deck next time! Until then, thanks for reading!

← Gearing up for Gameday Avacyn Restored: A look at the Nagoya Metagame
If your friends all jumped off a bridge, would you too? (A Black and Red ‘Suicide’ deck idea) →