Upcoming Events in Nagoya Next Weekend!

Just a short post, but important nonetheless. There are two big events happening next weekend in Nagoya and I’d like to give my readers enough time to plan for them in case they decide to go.

The first event is a Pro Tour Qualifier for Magic the Gathering. It’s going to be the first one I’ve ever been to. If you haven’t been to a PTQ before, here’s what to expect. The PTQ is 7 rounds of swiss with a top 8 Single Elimination after that. Needless to say it will be a long day if you plan on going (10 hours?). This Pro Tour Qualifier is being held at Higashi Betsuin Kaikan in Nagoya. It isn’t very far from Kanayama station. There are two ways of getting there:

The Meijo line connects to a lot of the other subway lines such as the Tsurumai, Sakura Dori, and Kami Iida line, so if you can find your way to the Meijo Loop line you should be fine. Don’t be afraid to ask questions if you have any.

Now that you know HOW to get here, let me fill you in on the smaller details. The games will be starting from 10pm, so be there earlier (9:30am) to register and fill out your deck list information. The cost is 1500 yen and the format is Standard. If you miss out on this PTQ, fear not, I believe there are still a few more before the Pro Tour in Osaka and other regions. You can find a list of the PTQs here – http://www.wizards.com/Magic/TCG/Events.aspx?x=mtg/event/protour/qualifierlist.

I also want to point out to those who haven’t played in a PTQ before what’s at stake here. If you were to win the PTQ, you would receive an invitation to Pro Tour Seattle and a free round trip plane ticket to the event from October 19th-21st. I believe that Seattle’s PT format is Modern, so even if I do win, I don’t think I’d end up going to the event because I have ZERO experience in that format. 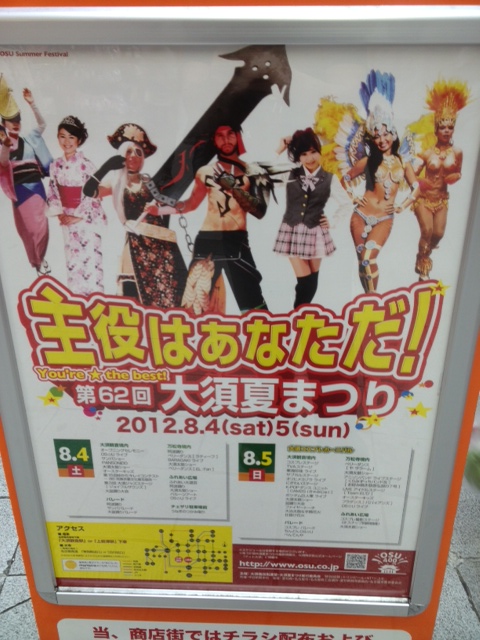 The Osu Kannon Summer Festival is just under two weeks away on August 4th and the 5th. It will be the first time that I have been in Nagoya during one, so I look forward to checking it out. The Summer Festival is a pretty large event with parades, dancers, and cosplayers filling the streets in and around Osu Kannon.

Some of the highlights on 8/4 are:

It should be fun to stop by for an hour two and take in the sights if you plan on being in Nagoya that weekend. There should also be plenty of photo opportunities so don’t forget your camera.

I believe I’ve posted directions to Osu before, but just in case here they are one more time. From Nagoya station, take the Yellow Higashiyama Line to Fushimi Station (very close, the next station I believe). From Fushimi, transfer to the blue Tsurumai Line heading towards Osu Kannon/Kamimaezu. From here you have two choices. Since the festivities will be around Osu at different places, you could start from Osu Kannon station, which is the next stop after Fushimi. This will put you near the temple, and there will most likely be something going on there and information about the event too. From the temple you can walk through the shopping arcade and search for the other live performances around the area.

Your second choice is to go to Kamimaezu station and to take exit 9 up to street level. From Exit 9 keep walking straight up the road for a block or two, then turn left when you see a giant white cat down the street. This most likely will be another performance area and you can work your way towards Osu Kannon temple from here.

If these directions are too vague, let me know and I’ll give you more detailed directions.

Here’s a video of one of the parades from last year’s festival to give you an idea of what kind of stuff will be going on.

I probably won’t be there the whole day, but if you plan on going and want to meet up for some food or drink I’d be up for it so let me know! Take care and thanks for reading.

3 thoughts on “Upcoming Events in Nagoya Next Weekend!”