I’m guessing there are only a few of you that continue to buy single cards from the Scars of Mirrodin block, let alone booster packs. In less than 2 months Return to Ravnica will be released, and with it M12, Scars of Mirrodin, Mirrodin Besieged, and New Phyrexia will be history. There are quite a few cards we’re going to lose, and the standard format is going to become a whole new world. I’m sure there will be some great Ravnica cards to take their place, but we’re going to lose 800+ cards overall, and only gain 249 or so. There will be a lot fewer options in October, but at the same time it will level the playing field for anybody who wasn’t playing or didn’t play during the Scars block.

I also realize that this article seems to be extremely far ahead of the set release, but with September full of Ravnica spoilers and Ravnica news leading up to the release, there is going to be little time to discuss how to replace the cards we are losing and which cards you should think about using in their place. That’s what I plan to do with my next series or articles. Every week or so, I’ll post my list of the top 10 cards that will be missed in each color from the rotating sets, and what cards would be a suitable replacement for them in Standard. While they might not be 100% as powerful as the card we are losing, they can fit the whole until something better comes out. I’ll also post which decks will lose power in standard as well as which ones should get more powerful.

Today I’ll be focusing on the Artifacts in standard that will be rotating in October. There are a lot of awesome cards that are leaving us, and not a lot that can take their place. Here’s my top 10 list of impact cards in artifact.

1. Sword of War and Peace

Sword of War and Peace single handedly castrated most mono red decks in standard. It made it damn near impossible to kill the creature it was equipped to, and the life gain kept the player safe while they pounded away at their opponent with a flyer. This card is in the sideboard of just about every deck out there, and when it leaves Standard in October, it will leave a lot of decks vulnerable to red and white removal. I don’t think a Sword has ever been reprinted, so don’t count on this coming back. Without this card in play, decks like UW Delver will weaken post rotation, and Restoration Angel will see a lot more play. I don’t really think there will be a card that can replace it. Maybe there will be something similar in Return to Ravnica.

Holy cow, talk about a game changer. Without Birthing Pod, an entire metagame will be lost. No more GR, RUG, GUW, GRB Zombie, or Naya(RGW) Pod. All of the Pod players are going to have to pick up a new deck and restart from scratch. This could affect the prices of Huntmaster of the Fells a little bit since that is almost alway the 4 drop in Birthing Pod decks, as well as Strangleroot Geist. Most of the other cards (such as Titans and Blade Splicers) will be rotating out. Because it uses Phyrexian mana, I don’t think this card will see a reprint any time soon. They might bring it back in a future set, but don’t count on seeing it any time soon. The only card I can think of that will let you search for creatures post rotation is Mwonvuli Beast Tracker, and even then it won’t be able to fetch every card you’d want. It also has the downside of only being used once.

Wurmcoil Engine is an absolutely sweet card. I don’t think it will stay out of the metagame long. Out of all of the cards rotating out, I think Wurmcoil has the best chances of getting reprinted in a new set within a few years. In it’s absence, I think control decks (especially UB and WB control) will lose a lot of oomph. Wurmcoil is used as a finisher a lot in the current metagame, and is great against board wiping effects such as Day of Judgment since it puts two 3/3 tokens into play when it dies. There aren’t really any other artifacts that can hold a light to Wurmcoil Engine, so be expecting control decks to take a huge hit post rotation and become a lot more vulnerable to life loss, large creatures, and red burn.

With the new Return to Ravnica block boasting a lot of multicolor cards, there is a good chance that Solemn Simulacrum might not rotate at all. We could definitely seem him back as soon as the next set. However, if he does rotate out in October, I don’t think players will miss him too much. Borderland Ranger from Avacyn Restored has already seen a lot more play in GR Kessig Ramp decks, and he works well with the blink mechanic that various cards have in standard. Of course you don’t get to draw a card with the Ranger or put the land into play tapped, but that’s the reason why Solemn Simulacrum is a rare. The only decks that will really miss him are going to be ramp decks, but with the Borderland Ranger available, I don’t think they will be hurting too much. 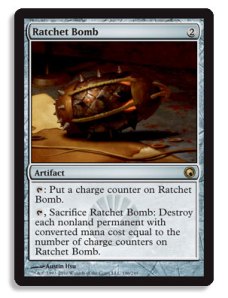 Oh dear GOD please reprint this in Ravnica! Without Ratchet Bomb, many decks are going to be at the mercy of endless armies of tokens. It’s largely a sideboard card, but without it decks like UW Spirits, UW Miracle control with Entreat the Angels, and Human decks will become a fixture in the metagame and will fill the battlefield with countless token creatures. Keep your eye on the prices of token producing cards like Lingering Souls and Midnight Haunting if this card doesn’t get reprinted. There aren’t a lot of cards that can take out crazy amounts of tokens all at once, and especially not at that cost. Blasphemous Act in Innistrad should be able to take out a lot of tokens, but it might be too late since you have to wait for number of creatures to hit a certain point to make it cheap enough to cast. Devastation Tide is a little better, since it returns all permanents to their owner’s hands, and it can be miracled for 2 mana. I can’t think of any other wide sweeping card that would work as well as Ratchet Bomb would against token creatures. Maybe Divine Recokoning from Innistrad, even though it leaves one token alive?

This is only going to be a loss for zombie decks, but it’s still a loss nonetheless. It works really well with cards like Blood Artist and Geralf’s Messenger, but a replacement has already been found for it I think. Bloothrone Vampire from M13 lets you sacrifice a creature at any time to give it a +2/+2 bonus, and it’s cheaper than having to re-equip for 2 mana each time. The drawback is that you aren’t doing any extra damage to the player. If you have Geralf’s Messenger or Blood Artists in play, it works well, but otherwise Mortarpod lets you interact more directly with your opponent. It’s possible we’ll see a reprint in the future, but probably not any time soon. I don’t think UB or BR Zombies will lose that much when this rotates out in October. 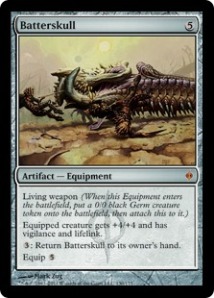 In my opinion, next to the Swords, Batterskull is the best equipment out there. It adds a lot of punch to otherwise weak decks that are running a lot of small creatures, and also lets colors that traditionally don’t gain you life gain life. Another plus is that you can pay 3 mana at any time to return it to your hand. This could save it from being exiled or destroyed, or also let you reset the germ token after it died from blocking or  attacking. It’s hard to say which decks will be affected the most when this card rotates out in October, but I definitely think some players will miss not having this in their deck. Hopefully it will be reprinted in the future, but I’m not holding my breath for too long. For 5 mana, you could cast a Ring of Thune (M13) and a Butcher’s Cleaver (INN), equip them for 4 mana the following turn, and as long as it’s a human you’d get +3/+0, lifelink, and Vigilance. And if it’s a white creature, you’d get a +1/+1 counter each turn. Not bad, but not as great as Batterskull.

9. Sword of Feast and Famine

Maybe this should be a little higher on the list, but it’s definitely not as popular as its brother War and Peace. The card is largely relegated to the sideboard in they decks that have them and doesn’t see that much play anymore. Its abilities are great, and having protecting against green and black are also good, but in the current metagame there aren’t too many people using black and having protecting from green doesn’t help much anymore with Rancor being played like there is no tomorrow. Sure its absence will hurt a lot of sideboards, but otherwise it won’t be that hard of a loss to cope with. If you really want an artifact that will pick up some of the slack of both of the swords, I’d say pick up Akroma’s Memorial. It gives ALL of your creatures protection from black and red, plus a number of other sweet abilities.

Okay, nobody is going to really miss this card. I probably should have left this card off the list altogether. However, Mono blue, UB, and WB control have been using this card a lot lately to lock down their opponent by bringing it back from the graveyard with (M13) Trading Post’s ability. Those are two decks that are going to probably drop off the radar in October, so if you’re interested in the lock down decks you should pick this card up now. The card probably won’t be back in a future set for a long time. And as far as replacements are concerned, there really aren’t any cards that let you take over a player’s turn like Mindslaver does.

When the rotation hits in October, I think the loss of these artifacts will be felt the most. If you have any other suggestions about which cards you think will hurt players’ decks when they rotate out in October, please leave me a comment.

Overall I think the loss of these artifacts is going to hurt a lot of people’s sideboards. People are going to be scrambling to replace these cards but there aren’t going to be many cards that can do the same thing. Some decks will grow weaker, some stronger by this change, and some will cease to be altogether. If you can think of other cards that will help replace the ones we are losing, I’d like to hear your opinion. I don’t know which color I will write about next, but it will probably be at the end of this week or next week sometime. I hope you found this article informative and are already planning on how to rebuild your deck before the rotation!  Thanks for reading.

← Playing Magic in Japan: How different is it from overseas?
My So Called Life Gain Deck (revisited) →

One thought on “A Whole New World: MTG after rotation – Artifacts”