Return to Ravnica: Playing to your Weaknesses – White

We’re racing through these colors now. It hasn’t even been a full day but I’m already posting my next color. White is the next color on the agenda. Ever since Avacyn Restored, the color has been no slouch, getting great cards such as Restoration Angel that have changed the metagame. White is going to shine in Selesnya I think, and here’s why. 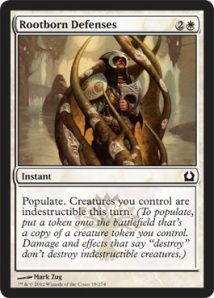 The first card spoiled for Return to Ravnica is also one of the best commons in white I think. So what if we can’t counter a Supreme Verdict? Your opponent is hoping to wipe your board clean, even if it means wiping away his 2 blockers as well. You cast Rootborn Defenses, and now your opponent is F*ed in the A. Maybe your opponent has a Mizzet Mortars and is set to overload it? Nuh uh . . . Defenses up. Okay, 3 mana is kinda high, but you don’t want to use this too early. You’re going to hold on to this until it can gain you maximum advantage. It’s a late game card. Maybe you’ll block and kill all their creatures, maybe you’ll survive a doomsday attack . . . we’ll see. This card will be great in any deck playing white. WGB, GWU, GW, etc. 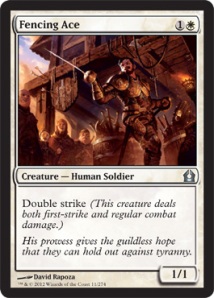 Fencing Ace is pretty sweet for an uncommon. He’d do best with some attack bonuses however. This could be an enchantment in a Azorius deck, or if you’re playing a Selesnya/Golgari deck, why not scavenge some creatures and slap their bonus on him? With even one +1/+1 counter he becomes a dangerous card, and with 2? He could quickly end the game if you can give him evasion. If you do play him, definitely find some way to boost that power as soon as possible. Pursuit of Flight in red would be awesome on him in an Izzet/Azorius deck as well. A 3/3 double striking flyer on turn 3 would be pretty hard to beat. Hopefully you’d have the mana for it though! 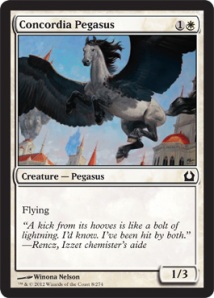 This is a vanilla card, but I like it for it’s toughness, casting cost, and evasion. It won’t win you any games, but it wouldn’t be bad to have one early in the game to block any unleashed Rakdos creatures. I wouldn’t put too many of these in your deck, but 1-2 wouldn’t be bad if you had nothing else. It really depends on what you’re playing against. If you’re just stalling and trying to mill your opponent, go with the Pegasus. 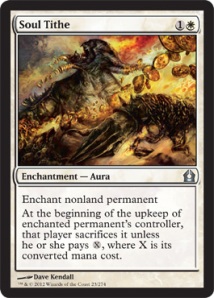 Here’s some white removal! It’s no Oblivion Ring, but it can really screw over your opponent and slow them down if they want to keep their permanent. That’s right PERMANENT. Planeswalkers, creatures, artifacts, etc. Anything not a land can get targeted. It’s also 2 mana, so if you put this down on a 2nd turn mana accelerator or other helpful card, you’re slowing down your opponent and getting ahead in the race. I’d use this in a UW Azorius deck with lots of detain, or a UW Mill deck to stall for more time. I don’t think it would be too useful in other color combinations, but it would be a good sideboard card in a Selesnya deck I think. 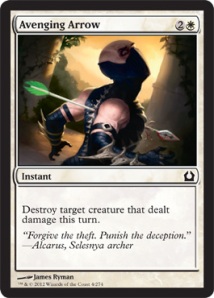 Here’s some more removal, and I think the wording is pretty interesting on this card; “Creature that dealt damage this turn”. This doesn’t mean it has to be you the player, but it could have dealt damage to your 1/1 token, and you could still destroy. Be sure to keep around some chump blockers if you’re going to use this! It would work great in a UWG defender/mill deck, Selesnya, or an Azorius deck. Three mana might be a little high, but it can be splashed easier than Murder could in M13 draft. If you need spot removal in white, put this in. 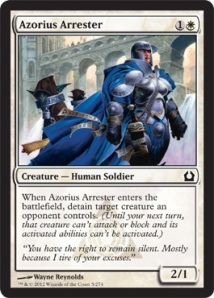 Good power level, good casting cost, good ability, fits the curve . . . good card. He works very well in an Azorius themed deck, and if you’re using cards like Faerie Rogue or Voidwielder , you can get some extra use out of him relatively cheaply. He would also be a good card in any other X/white deck, but I think you’ll get the most out of him in UW. 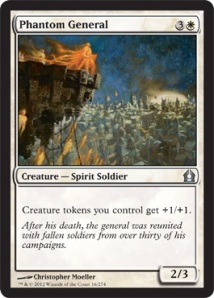 Did tokens REALLY need another anthem effect? They already have Intangible Virtue, fliers have Favorable Wind, and spirits have Drogskol Captain . . . geez. It’s pretty obvious that he’d fit in the best in a GW Selesnya deck. If you’re going to build around one or two of these cards, make sure you have lots of token producers and populate effects, because if you don’t he’s probably left better in the sideboard for something else. He’d be okay as a late pick, but I wouldn’t take him early unless you’re planning a token deck. 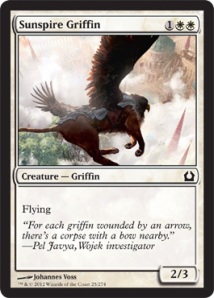 Another vanilla card with no special abilities other than flying, but he’s a little better than the Concordia Pegasus. A 2/3 flyer for 3 mana fits the curve in a Azorius deck very well, but be careful of that double white casting cost. He’s probably not going to finish any matches for you, but you could build a UW Flying Fortress deck full of flyers, detain, and defenders that could get the job done pretty well against ground based aggro decks. 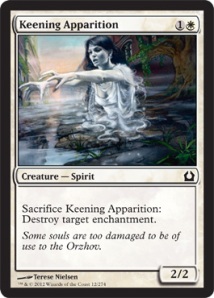 Again, this is a solid card with a good bonus. I’d play a 2/2 for 2 mana in my curve, and the added bonus of destroying enchantments is pretty nice as well. It would be best against Azorius, but it could also hurt Rakdos and Selesnya as well. If you get one it wouldn’t hurt to be one of the 23 cards you pick.

Chris and I saw pretty much eye to eye on white. The two cards he added on his list was Selesnya Sentry and Trostani’s Judgment. The sentry is a good creature. It’s a 3/2 for three mana, but for me I thought that the regenerate effect was a little too steep. However, on second thought, it’s a great card to keep around for the late game. There aren’t a lot of creatures with regenerate, and there especially aren’t a lot of 3 power creatures with regenerate. He could save you from quite a few relentless Rakdos’ creatures late in the game, but he won’t be able to do it alone. He’s going to need some support. Perhaps some Golgari counters in a GBW deck? Then he’d be worth having in the deck!

Trostani’s Judgment has a VERY powerful effect. Exile a creature from the game AND populate. Talk about turning the tables. Late in the game it’s going to come down to monstrous attackers, and this card will be very handy. I’m just a little worried about the casting cost of 6 mana. It would be worthless against Rakdos I think, but it would be a good card to have against Golgari and the other guilds. Keep it main, but don’t leave it in against Rakdos. You’re going to need faster removal and blockers against them.

White has some really good effects. Their creatures are a little underwhelming, but their spells can really save your butt in a time of need. These cards won’t be your finishers, but they will help to protect your finishers from various ill effects.

After looking through black, blue, green, and white, Azorius is looking like it could be a very good deck if you open the right cards, but Golgari and Selesnya are going to hold the power in the long run. I think Azorius will play well against Rakdos, but they could have problems against Izzet (direct damage) and Selesnya (overwhelming hordes) .

Phew, another color done! If you have any suggestions or comments, be sure to leave them down below. If I have time in the morning I’ll do red, but most likely it won’t be posted until Friday night Japan time. Red is looking like it’s going to be REALLY powerful, so stay tuned and check back tomorrow!