What to Expect: The Impact of Return to Ravnica on the Metagame – Black, Green, and colorless

If I didn’t have to work, I probably would have posted this up sooner, so please forgive me. I’ll be saving Hybrid and Multicolor for Friday, but today I’ll be covering Black, Green, and Colorless. Let’s start off with what new black cards will be affecting the metagame.

I can not BELIEVE this card is hovering near the junk rare price of $2-$3 on some websites now. This card is amazing. It won’t fit into any of the current decks, but if you read back about how some decks wouldn’t fare well after the rotation on 10/5, then you probably remember me taking about UB Heartless. UB Heartless got absolutely gutted, but I think it’s due for a rebirth as BR Heartless Summoning. Putting just 1 Heartless Summoning out will make this a 5/5 flyer as early as turn 3. If that’s not powerful, I don’t know what is. If you’re playing black and red, just burn or destroy their creature before the attack phase, then attack for 5 on turn 4 while bringing out more and more low costed creatures. With Unleash, you’re basically losing nothing (except your defense), but it won’t matter if you’re dealing 10+ damage on turn 4 in the air. Teaming this guy up with Falkenrath Noble or Blood Artist would also be pretty nasty.

This card is kind of a tough read. On the surface it oozes black flavor. Lose a life and draw a card. This means if you get too greedy you could land yourself in dangerous territory, but you could also reap some serious rewards. Where would it fit though? Control (BR or UB), or maybe WB Tokens?  Mono black aggro wouldn’t have problems casting it that’s for sure, and recently I’ve seen a few more of those popping up. Those types of decks always play Blood Artists, so the life loss won’t hurt too much. WB Trading post definitely won’t be able to use this now that Wurmcoil Engine and Batterskull are out of standard though. I think you’ll see this in some decks, but black already has Sign in Blood (M13) and Altar’s Reap (ISD) for card draw. What black really needs post rotation is more removal. 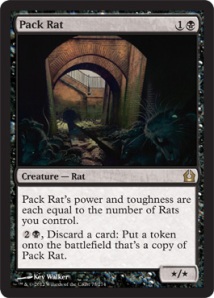 My friends said this card was great in limited during the pre-release, but I’m not wholly convinced. There are a few rats in standard that could work with this deck (Ravenous Rats, Typhoid Rats), but I don’t think that’s feasible. I could see this card maybe getting play in some Frites decks because it gives that deck an early game while still filling up your graveyard with Unburial Rites targets. With all the graveyard hate in the new standard (like Rest in Peace), I’m a little hesitant to play this card though. A white/black populate deck with Lingering Souls and other token bonuses might be possible though.

Other black cards in the metagame

He’s gonna get play. I don’t know where just yet, but you can’t beat a 5/5 for 4 mana that can put 5 +1/+1 counters on turn 6 if it dies before then. Who cares if it’s vanilla. I think there is going to be a new Golgari type deck that is going to be all about sacrificing your own creatures for the sake of making creatures on the next turn bigger. Call it Power Ramp or something. Instead of ramping mana, you’ll be ramping power and attacking for lethal really early. GR and Naya beatdown are packed at the 4 spot, but this deck could get some play in GW Aggro or BG aggro.

I played with this card during the pre-release and it was INCREDIBLY powerful. I’ve already put my copy into a UG Delver build that uses Mayor of Avabruck. Just think about it. You have 4 Mayors in play, making her a 5/5, and when she attacks those Mayors all become 9/9s! It will also add to Delver’s attack, and if you can slide some Rancor’s on her or something else to boost her power you can hurt your opponent incredibly quick. You’ll see this in G/X aggro decks for sure.

There are going to be an increase in 3+ color decks, and I think Mana bloom will help with mana fixing a lot. It would be like a 2nd turn Rampant Growth, and after that you can throw it down later in the game for the color you need the most. With a few of these in your hand, you can totally cheat some creatures into play as well as play flashback abilities without hurting your mana selection. It won’t get tons of play, but I think some decks will use it.

How could you NOT want to play this card? I mean, it’s ONLY 11 mana, and in return you get a 15/15 creature with Trample! This is what cards like Druid’s Repository and Battle Hymn were made for. Throw down the T3 Repository, a T4 Parallel Lives, a turn 5 Thatcher Revolt (Tokens doubled, puts 6 counters on the Repository), and on turn 6 you have 6 mana and 6 counters to cast your 15/15! Watch your opponent shudder as warm pee drips down their leg ^_^ (with a few mana creatures you could get him out on Turn 5 probably!).

Other green cards in the meta

This is the ULTIMATE mana fixer. Every mana you have suddenly becomes a Lotus, able to create any color. I think this card is undervalued at the moment. Lets say you want to play a Legendary creature or multicolor card that only shares one of your deck’s colors. Maybe you don’t have the shock land to splash in for that 3rd color, but throw in 2 of these and you could set by the 7th or 8th turn when you want to drop in a Gisela, Blade of Goldnight in a white deck or an Abrupt Decay in a green deck. Once Gatecrash comes around I think people will be appreciating this card a lot more. If you’re playing 3 or more colors, you should definitely use this card. It’s also good if you can’t afford all the dual lands for your deck.

I think you can be sure that this will go into every Naya (RGW), Bant (WUG), and GW deck in the metagame. 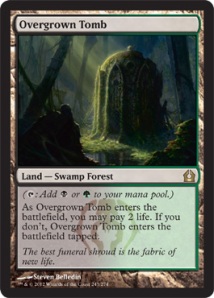 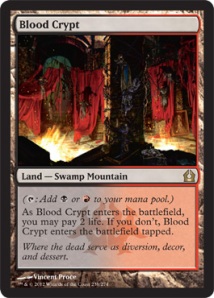 I don’t think I really have to explain any of these. ALL of these cards will see heavy play in their corresponding deck colors. The two shock lands I’d like to point out the most are Overgrown Tomb and Steam Vents. Before Return to Ravnica, the only “friendly” colors that were available in sets of two were from Scars of Mirrodin and M12. With the rotation, GR and UB decks will lose one of their two color mana producers. This means that GR could have some mana troubles early on, and that decks like UB control could also see some hiccups in the early weeks.

On the other side of the coin, Overgrown Tomb will probably help to creature the new meta of BG aggro, or BG Zombies, along with the help of Woodland Cemetary. Izzet will also get a boost with Sulfur Falls/Steam Vents, so in the early weeks of the metagame you can probably expect to see an increase of UR decks.

Other Colorless cards and lands in the metagame

Look for GR and UB decks to suffer without the second set of dual lands, and also look for old decks that weren’t big before to resurge. I think Exalted and Burning Vengeance will finally see their time in the sun, and that mono black aggro will also see more play with all nasty demons and zombies that have been added to the metagame.

Ramp decks will have to rethink their strategy, but don’t count them out just yet. Aggro decks will continue to be king, but if somebody comes up with a decent control strategy you can be sure the metagame will be turned on it’s head.

This Friday Night Magic is going to be crazy, so be sure to hit hard and hit fast and good luck this week and next! I should have the multicolor cards up in another day, so please check back if you’re interested. Thanks again for reading and enjoy the new layout!