Magic Stores off the Beaten Path: Hamamatsu and Kariya

Good news to all you people living in western Shizuoka! A new card shop has opened in Hamamatsu, Japan. C-labo can be found all over Japan. You can buy and play tons of different card games here. This is a Magic blog though, so of course I wouldn’t be posting about this store if it didn’t affect my readers in Japan. 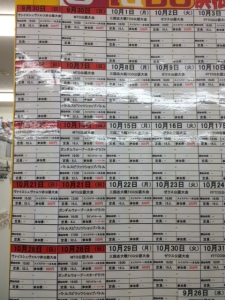 With only one other store in Hamamatsu that has events (Master’s Guild, which has FNM, EDH, Legacy, and Modern formats sporadically), it’s nice to have a different place to get your Magic fix at. During my visit to the new store, I saw that they have regular casual Standard tournaments every Sunday at 1pm. The cost is 300 yen, and I think the length of the match and prize depends on how many people show up for the match. The max number of players for the event is 16 people. I’m not sure how popular it is, so if you go I’d like to hear how it went.

There is a lot of floor space at the store (which used to be a drug store I think), and the game area is a decent size as well. However . . . 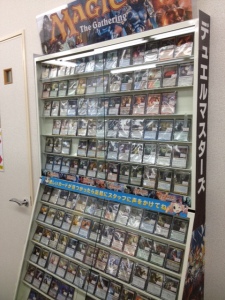 . . . the card selection is rather small here. This might change in the future depending how many Magic players go there, but for the moment if you need singles, it’s probably better to look for them in bigger cities like Nagoya, Tokyo, or Osaka. I didn’t ask, but I’m going to guess that it’s okay to sell cards there as well. You’ll probably need a foreigner card or Passport to do so, and I have no idea if they give good money for cards or not. If you find anything out, let me know!

If you know downtown Hamamatsu rather well, you should have no problem finding this place. But if you don’t, I’ll give you the directions from Hamamatsu station. Hamamatsu station is located on the JR Tokaido line between Shizuoka city and Nagoya.

Being a former resident of Hamamatsu, I found it incredibly easy to find, but it might be tricky for those that aren’t from there. Just keep in mind that it’s less than a few minutes away from Shin Hamamatsu station, the Chambord bakery, and the Starbucks on the corner. If you have any questions, please ask. Otherwise, good luck finding it! 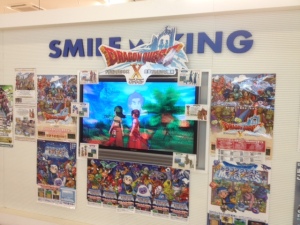 Smile King is a Japan-wide chain store of video games, cards, and anime. There is a Smile King in Hamamatsu that sometimes sells Magic cards (and sometimes doesn’t), but this one in Kariya DEFINITELY does (or did the last time I visited it). Kariya station is on the JR Tokaido line between Nagoya and Toyohashi. It’s the second stop on the New Rapid train out of Nagoya (I believe). On a local train it might take a little longer.

For the most part, Smile King isn’t a magic store, but it does hold casual matches 2 times a month. The dates vary, so if you live near Kariya and want to play, ask for their game schedule or check near the card area for a list. It seems like the store is starting to push Magic events more, so I wouldn’t be surprised if they up the number of tournaments a month in the future. I was told that this casual tournament is for 8 people, and that it’s free to play. I’m not sure you get anything for winning, but if you need your magic fix you can go here.

Their play area is a decent size, so if you just need a place to play with friends, this is a good place to go. The store has recently brokered a deal with Card Box, and is getting a lot of modern and older cards in their cases there finally. When I last went to the store, there were a lot of 6th-7th edition era cards from sets like Torment, Invasion, Prophecy, etc. and their bulk single boxes has grown as well. Might be worth looking through there every once in a while for a deal. Getting to Smile King isn’t hard at all.

You can take either the Meitetsu Line (from Toyohashi or Nagoya) or the JR line (again from Toyohashi or Nagoya) to Kariya station. Once you arrive and exit the ticket gates, turn left. You’ll see a large Supermarket/Department store by the name of VALOR as soon as you leave the station. Enter the building and make sure you’re on the 2nd floor. As you walk in you should see a variety of stores. I believe there is an ECC Eikaiwa, a bookstore, and a gym. Next to the bookstore is the Smile King I believe. It’s pretty straightforward getting there I think.

They were in the middle of a remodel when I visited a few months ago, so the location of the cards and everything might have changed. They might have also changed the dates of tournaments as well. Return to Ravnica has been a very popular set, and more people might be playing it now.

There was one more game shop in Kariya, but I did not have the chance to go there because it was out of the way.

I enclosed a link with the information about the shop, but after looking at it on a map, it seems like it might be somewhat difficult to get to without a bike or a car. If you feel like walking for about 20 minutes or more and have a map/smartphone navigation, more power to you. If you don’t want to do that though, there is another choice. I stopped by the police box for directions while I was in Kariya and they helped me devise a way to get there.

Be careful that you don’t stay there too long, because the last train back to the station is 6:33 pm. If you plan on walking back, that’s fine too. The last bus FROM the station is 8:05 pm. Here is a picture of the bus schedule if you can read Japanese.

I know today’s post isn’t much, but hopefully it will be useful to those of you living in the countryside. I wanted to play Magic so much when I was living in Shizuoka, but could never find a place. Hopefully this will help some of you! My goal is to eventually map all of the major hobby stores in the big cities, as well as other heavily traveled areas. I have two more from the Nagoya area I still have to post, so when news gets slow again, you can be sure I’ll post about it.

There should be another post coming this Friday about the Metagame in Nagoya, so look for it on Saturday sometime. Thanks again for reading!

← Return to Ravnica Metagame – Week 1
Be Fruitful and Populate →

One thought on “Magic Stores off the Beaten Path: Hamamatsu and Kariya”