The Zombie Apocalypse (the Nagoya Metagame before the Grand Prix)

So lately I’ve been watching a lot of The Walking Dead. I just started the second season and it’s a great show. I’ve always loved Zombie movies: Dawn of the Dead, the first Resident Evil movie (and the games before that of course), and the Evil Dead movies as well (even though those movies are more about pure evil getting into your hands). 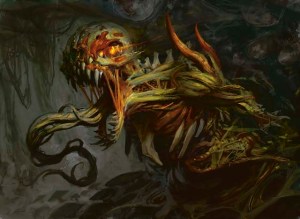 Fast zombies are the scariest

In everyday life I see them on the subway trains, at their companies, and especially in Magic the Gathering.

In the last metagame update, I talked about how the last Nagoya Grand Prix trial at Amenity Dream was won by a BR zombie deck, and the second place deck was also a BR zombies deck. You know, I should have saw a pattern evolving. My friend Chris said that zombies were on the move in the metagame, but I didn’t want to believe that the zombie apocalypse had begun. If only I had seen the signs . . .

I finished 2-2 this Sunday, and this was the first real tournament since the GP trials ended. There was 20 people, and I went up against a GW aggro deck, a Frites deck, a GWU control deck, and a Jund control deck. Selesenya aggro ended up beating me in 3 games when I could get any white mana out and Bant control gave me problems with Supreme Verdict. However, I did manage to deftly handle Frites with well timed removal spells aimed at his Restoration Angel whenever he targeted his creatures in his own graveyard, as well as Purify the Grave. In my Jund match-up, life gain kept me in the game and a fast hand completely overran my opponent. In both the Frites and Jund match-ups, Collective Blessing was a great card and kept my cards alive against Mizzium Mortars and Bonfire of the Damned.

The winner of this event was playing UWR tempo, and Naya (RGW) midrange with cards like Wolfir Silverhart and Thundermaw Hellkite came in second. I thought we were playing 5 rounds, but we ended after 4 and I didn’t have a chance to see what the other players were using.

I was on my ‘A’ game right off the bat and finished a UW control player by simply overwhelming him in my first match. GW aggro proved to be a problem for me in the early game since I wasn’t running the proper removal and I dropped to 1-1. He kept his creatures under 4 power which made my Selesnya Charms worthless, and pounded the ground with his Loxodon Smiters and Strangleroot Geists and before I knew it I was done for. Abrupt Decay would have been great against his deck. Keeping faster hands is also important.

I went up against BR vampires in the next game and his use of Stormkirk Captains ended up working against him. Selesnya Charms took out a lot of his beaters like Olivia Voldaren, and my creatures found themselves overwhelming him after a few turns. The 4th and final match on Saturday was between the same player I went up against in the finals of last week and he beat me again with his Selesnya Midrange deck. He was able to consistently drop his Collective Blessing on the table and it absolutely destroyed my creatures that were boosted merely by Intangible Virtues. I did realize that the deck was really weak against flyers, so if you focus on going over their heads you can pull out some wins.

I found myself at 2-2 again, but I had more of a plan afterwards to improve my win percentage. At least that’s what I thought . . .

Absolutely horrible outing at Big Magic the week before the big tournament next Saturday. I went 1-5, with my only win coming from a bye. There were about 40 players, so it was really competitive. Hopefully I can get all of the losing out of my system before the Grand Prix. I kept 1 land hands TWICE for some reason, and lost both of those matches. If I had kept better hands I probably would have won, but hindsight is always 20/20. Keeping one land hands, even with 3 mana creatures, is INCREDIBLY STUPID. Don’t do it. I had mulliganed really well the past few weeks but for some reason I was feeling ‘lucky’ so to speak.

Luck counts for nothing against the best players in the prefecture.

I let the Bant control player get to the late game in both game losses, and once he used Tamiyo’s -8 and Sphinx’s Revelation, it WAS pretty much over. The new BR zombie decks are really fast. I found myself in trouble very quickly without cards like Centaur Healer sided in, and I also didn’t take out my big cards which led me to having cards stuck in my hand. I learned that having tons of mana creatures isn’t all that great in a metagame where Pillar of Flame has come back. The slower you stabilize against a BR zombie aggro deck, the worse your chances of winning are. Another card that destroyed me was Falkenrath Aristocrat. Luckily I had enough Lingering Souls to block and get me a few game wins, but when I didn’t draw them early I lost.

Jund aggro was pretty much the same problem. I had trouble taking out cards like Olivia Voldaren and lost. After today’s embarassing losses, I decided to switch a few cards after my friends’ suggestions. First off, I’m running 4 Farseek and 4 Avacyn’s Pilgrims instead of Arbor Elves because the Elves constantly get targeted and screw up my mana. I also went up to 24 land again, which should work well with the Farseeks. In my sideboard I put in Tragic Slips to deal with Falkenrath Aristocrat, and I also added a Curse of Death’s Hold against zombies. In play testing it was great against their Gravecrawlers and Aristocrats, and as long as I could gain enough life I could win the game. I also added a 3rd Centaur Healer for those fast aggro match ups, so we’ll see how it works out.

The winners for the event were a GWB Craterhoof Behemoth reanimator deck, as well as a UW Humans deck. Fast decks were king and you’ll be seeing a lot more of them I think.

What to expect at the Nagoya Grand Prix on 12/8

BR zombies will definitely be a big part of the Grand Prix, and not far behind will be GWB reanimator I think. JUND (BGR) aggro or control decks will also be a big part of the meta. Those decks will make up a good 60% of the metagame I believe. After that, we’ll see a few UW flash/human aggro decks, followed by Bant (GWU) control/aggro, and I think there will still be quite a few players running UWR midrange/tempo/control as well.

Decks that are well suited to taking out Reanimator and BR aggro decks will do well I think.

Just a reminder about the GP one more time;

For a full rundown of this weekends information, please follow this link to Wizards of the Coast’s website:

I hope you found this information helpful and if you have any other questions about the metagame or Nagoya, I’d be more than happy to help. Thanks for reading!