Thanks again to everybody who made last year a record breaking year for me! The Japan Hobbyist received more than 40,000 views in 2012! From small beginnings, this blog has grown into something rather big that I’m proud of. To put it in perspective, I had a TOTAL of 119 views for ALL of December last year when I first started. Since then I’ve been working tirelessly to provide decent content for my readers. This year I had more than that on January 1st alone! Here’s to hoping I can double my views to 80,000 this year, and if possible reach 100,000. If you see an interesting article, share it with your friends. I’d appreciate it ^_^.

This isn’t my first New Years in Japan, and it probably won’t be my last. New Years is a little different in Japan. For those of you that live in countries that celebrate Christmas, January 1st is more like Xmas than our New Years. Kids get presents, families come together to celebrate the holiday and eat huge feasts, and after midnight everybody heads to a temple or shrine to pray for a good new years. 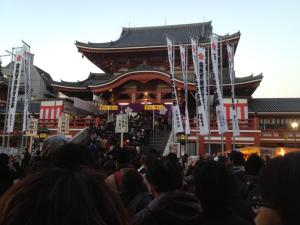 Another tradition of mine while I’m living here in Japan is to watch the Downtown No Laugh Special. Downtown is the name of a comedy/variety show that is very popular in Japan. The two main comedians, Matsumoto and Hamada have a TV special every year where they go to random places and have to make it through an entire day without laughing. If they laugh, masked people with rubber clubs come out and slap them as hard as they can in the ass. Throughout the entire show, the producers throws all sorts of jokes and has famous people appear doing random things to make people laugh. Needless to say they are pretty sore by the end of the day.

A famous Japanese talent dresses up like a rocker, then proceeds to get a live pincer beetle put on his nose by his girlfriend while the Downtown members watch

And last, but not least, Japan also has the tradition of the Fukubukuro. Think of them as Mystery bags. All stores do them, throwing random products into a bag then sealing it. They range in prices from a few thousand yen to hundreds of thousands of yen depending on where you go. I bought a 10,000 yen Fukubukuro from Hobby Station Meitetsu Eki today, and this is what I got:

Not bad! I got a booster box of Return to Ravnica, a deck box, sleeves, and some World of Warcraft booster packs for about $114 (USD). Boxes are usually about 13,000 by themselves, so this is a rather good deal. I’m guessing the contents of each back are different, but I was lucky enough to get a box of RTR instead of M13 or Dark Ascension.

For those of you following your Planeswalker points, you probably saw that they have been reduced down to zero again for the new season that started on December 17th and will end March 17th (I think). My goal for January is to reach 100 points before the Gatecrash pre-release, as well as to keep a winning record. I’m currently at about 49 points, so it’s definitely possible. I don’t think I’ll be getting more than 750 points for a second bye before the next Grand Prix in Yokohama at the end of March though. I can only hope to win a GPT this January or February to have a chance as the Grand Prix (which is Sealed/booster draft format). My deck has a chance, but it’s all going to depend on how well I can read the metagame.

The Gatecrash previews have already started, and my friends and I are hungrily devouring and debating each card that comes out. As more cards are posted, I’ll be posting my first impressions of the cards that have been revealed. I will also be talking about the current metagame in Nagoya and what cards have been performing well and have gotten a lot of play.

Next time I will also be talking about the pre-release schedule for Gatecrash around Nagoya, as well as the Grand Prix trials and PTQ information if I have it. Until then, thanks for reading and Happy New Year! Be sure to check back this weekend for new posts!

← 2012 in review – Thanks for a record breaking year!
Rock, Paper, Scissors – The New MTG Metagame →