Bang for your Buck – Investing in cards before Gatecrash: Lands

Well, there are two weeks until the Gatecrash pre-release, and we’ve only seen about 92 cards out of 249 or so. Have you all been following the spoilers and deciding for yourself which colors look good to run in limited or which cards you want to add into your current decks? I’ve been doing it a little bit, but for the most part I’ve been thinking about how to BEAT these cards if I come up against them. There are going to be tons of new strategies and you might have to play a totally different deck in order to compete at GPs, Invitationals, and Friday Night Magic. Today I’m going to cover lands from the current Innistrad, M13, and Return to Ravnica block and pick which cards I think will go up in value once Gatecrash is released. 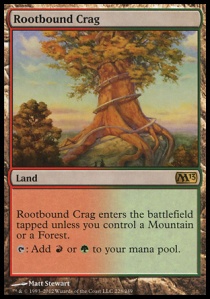 M13 lands are the cheapest multicolor lands in standard right now. Their drawback is that you have to have a basic land or one that counts as one of those land types to put it into play untapped. There are 5 lands in all from M13, and 3 have already seen a lot of play in the current standard environment. Glacial Fortress, Dragonskull Summit, and Sunpetal Grove are almost everywhere. On the other hand, Rootbound Crag and Drowned Catacomb haven’t taken center stage yet. However, that’s about to change.

The other lands will hold their value, so don’t go out selling them just yet. GW and UW will still be used a lot in Bant (GWU) and BR should see play in Grixis. Overall, I think investing in play sets of these if you don’t have them is a good idea.They are cheap and you’ll be able to use them for another 9 months at least (or longer if they keep them in M14).

There weren’t any multicolor lands in this set, but that’s not to say that its land cards won’t see an increase in value. In fact, I think you will see an increase in value of almost each of these lands. Cavern of Souls should hold it’s value, so don’t expect it to drop from it’s current price (in fact, if you see a deal it should be worth it to pick it up). 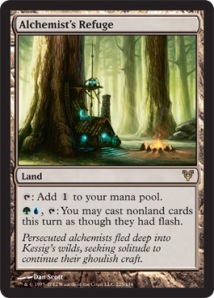 I don’t think Desolate Lighthouse will go anywhere, so don’t expect it to go up in price that much. It will have a good utility function in Grixis, but other than that I don’t see it going up in value. There is always the possibility that RUG decks could take off, mixing Gruul’s powers with Simic (UG), but I don’t think we’ll those decks until a few weeks into Gatecrash. 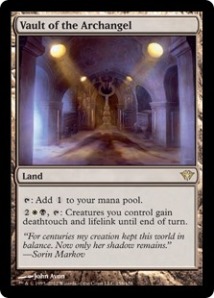 Vault of the Archangel

There is really only one land card that will see play from DKA, and that’s Vault of the Archangel. Its colors are great for Orzhov, and you can be sure it will fit into RWB and WBU decks after gatecrash hits. I have two right now, but if the price is right I might pick up two more for a playset. One store I went to had them for $1, and that is DEFINITELY a buy price. Star City is selling them for $3 now, but I think we might see these go up a dollar or two. I’ve been debating whether or not to put them into my Boros humans deck and splash black for it, because nothing is better in an aggressive deck than to gain life and deal deathtouch with first strike. It’s quite possible that RWb will become a deck type, but it will probably take a backseat to the other color combinations in the early weeks.

Innistrad lands have been hot for a while now. You can go into any game store and chances are each Innistrad land will be selling for over $10. Sulfur Falls and Woodland Cemetery saw a huge jump in value when various UWR decks and Jund (GBR) decks took off, and they’ll probably hold their value for the near future. However, it’s the other 3 that will probably go even higher in value with the next set. 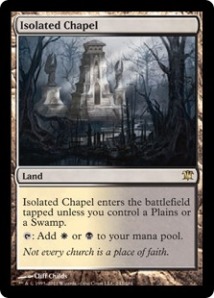 Innistrad also had a lot of good non-basic lands as well. Gavony Township will probably see more play in Junk and Naya decks, and I think the emergence of Dimir will bring Nephalia Drownyard back into constructed. Dimir (UB) control, Esper control, Grixis control, and who know’s what else will use some of these in their decks. The other non-basic land that once dominated the Scars of Mirrodin/Innistrad block standard tournaments is Kessig Wolf Run. It’s value took a nose dive when Primeval Titan/Inkmoth Nexus ramp decks rotated out, but with the return of Gruul lands, it will be seeing a lot more play.

With any of these non-basic lands, if you can find a deal it wouldn’t hurt to pick up 2 or so. I found Nephalias for about 25 cents each the other day, and Kessig Wolf Runs have been hovering around $3 or so, sometimes cheaper. I don’t think you can go wrong buying it at this low price. It’s a great card and will see a lot of play in the coming standard environment.

Thankfully, RTR shocklands have come down in value since they were first release. For a while, the cards were all selling for about $15 each, but now they are closer to $11 a piece. Steam Vents in particular has seen the largest discount, with some copies selling for only $9 now. With the coming colors, I think that Steam Vents will stay around that value, and most of the other lands will keep their values as well. Blood Crypt and Overgrown Tomb’s price will depend on how popular Jund and Grixis decks are, but I don’t think they will go up in value. Hallowed Fountain should hold it’s value due to it’s use in Esper and Bant decks, and Temple Garden will definitely go up if Naya and bant aggro decks take off.

There aren’t a lot of lands compared to the number of other cards in a set, but this article was a huge undertaking. I’m a little intimidated by what lays ahead, but I’m going to keep pushing on. Next time I’ll be taking a look at Artifacts and what I think will be a good investment prior to Gatecrash’s release, but I expect my job will only get harder as a lot of this is guesswork and going on current data in the metagame. As you know, the metagame is all over the place, and can change on a whim. A card thought to be totally worthless can suddenly become the flavor of the week and see a huge spike in value. Thanks for reading, and if you have any feedback or if there are other cards I missed, please let me know. See you next time.

2 thoughts on “Bang for your Buck – Investing in cards before Gatecrash: Lands”