What to Expect: The Impact of Gatecrash on the Metagame – Lands, Artifacts, and Hybrid cards

NOTE: Gatecrash vocabulary words have now been added to the “MTG Vocabulary (In Japanese)” tab at the top of the page. If you’re interested in how to say “Battalion, Bloodrush” or any other Gatecrash words in Japanese, check it out!

Wow, has it been three months already since I last did one of these? Well, for those of you that have been following my blog for a while, you know that after every new set is released I go over each color and guess which cards will see play in standard. I was kind of slow on Gatecrash and I apologize. We are already 1 week + into the new metagame and I haven’t even posted the first article yet. Sorry. Work, and writing my Bang for your Buck series has taken a lot out of me, but you can be sure that I’ll cover all of the colors by the end of next week. Instead of doing one post for one color, I’m going to do a few at once. Today’s article is going to cover Lands, Artifacts, and Hybrid cards. There aren’t many cards to go over, but lets get started anyways.

Well, the cycle is complete and now ALL shocklands are at your disposal. You could make a rainbow colored deck that tastes like Skittles and nobody would even bat an eyelash (in fact there were quite a few 4 color aggro decks and 5 color control in the last month of Return to Ravnica). It’s also been stated that all of the Dual Lands will be appearing in Dragon’s Maze in May, so if you can’t get your hands on all of them right now, don’t sweat it. I’m actually running Guildgates in my decks as place holders until I get the cards I need.

A week into the metagame, both Sacred Foundry and Stomping Ground have earned the top spot as the most popular shock lands due to the popularity of Boros, Naya, and Gruul aggro strategies. This was pretty much a no brainer though. What can we expect from the metagame in another few weeks though? 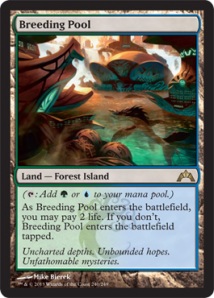 I think Breeding Pool will probably be the next big land in the metagame as people embrace Bant aggro and start to abuse evolve and Simic decks. I’d give it another 2-3 weeks before Breeding Pool goes up in price. Of course it won’t hold its value for long, and after a month or two people will be selling them around 1000 yen ($10). Bottom line, you’ll see all of these lands seeing play.

Bant Hexproof was a problem a few weeks ago before Gatecrash came out, but suddenly the archetype has been dropped like a bad habit (even though it won a GP not too long ago). Will it be back? Probably, but when? Who knows. Aside from Geist of Saint Traft, I don’t think you’ll see many other hexproof creatures in standard. So where will this see play? In aggro. The second ability is a nice trick, especially if you’re playing Gruul and can get in there for a quick kill. This won’t be used in groups of 4, but I could see this getting some play as a pair of cards in some decks as a way to push more damage through.

Rakdos Keyrune was the winner from RTR’s group of Keyrunes. It was a 3/1 first striker which was simply amazing when coupled with cards like Kessig Wolf Run in a Jund deck. While the Gruul Keyrune has built in trample, I think the Dimir one will have more applications in the meta since it’s unblockable. Esper control, Grixis, or plain old UB control could abuse this card in the future. I think the Simic Keyrune might also see play in a Bant Control deck in the future.

A lot of people thought that Boros Reckoner was a good card, but who would have thought it would be $20 good? That’s where the card seems to be going at the moment. You can be sure it will see a lot of play over the next few weeks and stay in the metagame for quite a long time. But what about the other hybrid cards? Which ones will be playable?

I believe there are definite applications with a card that can bring back huge amounts of cards all at once. Immortal Servitude adds a spin to traditional Frites/Reanimator decks. There are some cards that have great enter the battlefield abilities, and it’s only a matter of time before somebody breaks this card. It will have to watch out for Rest in Peace though. I personally would like to see somebody play this in a RWB Frites deck using Flayer of the Hatebound then returning all of their 2 or 3 mana creatures with him in play to deal tons of damage to their opponent. It’s possible!

I’m going to keep this first post short just to get the ball rolling. I think it’s a safe bet that the cards I featured will see some play, but if you think there are some cards I overlooked, feel free to post your suggestions and your reasoning behind them. Thanks for reading and look for the next article after the weekend!

← Bang for your Buck: Investing in cards before Gatecrash – Red
What to Expect: The Impact of Gatecrash on the Metagame – White, Blue, and Black →