Oh give me a home, where the Thragtusk roam,

Where the Huntmasters and  Restoration Angels play,

Where seldom is heard, a Sheltering Word

And the Favorable Skies are not cloudy all day

Game Day has come and gone. How’d did you do? For the first few weeks of Gatecrash, aggro reigned supreme. Boros aggro, Gruul aggro, and Naya aggro have been the dominant decks of the metagame recently, but this weekend we could see a new king of the hill. After Bant control’s impressive victories at the Pro Tour last weekend, it’s possible that control will be seeing a lot of play in the coming weeks and fight its way to the top. So how do you play against this? Do you chance playing a fast deck that needs to win by turn 4 or it has no way of winning? Do you join in the control party with your own mix? Or do you play something that builds slowly into something so big that they have no chance or surviving? I’m planning on choosing the later. I ran midrange this weekend at Gatecrash Game Day.

What is midrange you ask? Simply put, midrange uses the first few turns to set up the board and continues to build the board up until it launches a huge attack. UWR Midrange uses tempo cards like Azorius Charm and Thundermaw Hellkite (sometimes with a Runechanter’s Pike attached), and Jund Midrange focuses on cards like Rakdos Keyrune, Kessig Wolf Run,  and Bonfire of the Damned to destroy their opponent (Thragtusk is also an important part of this deck). These decks can ramp up to something big remarkably quick and go toe to toe with Aggro, but it also has a way to stay in the long game against control. My dilemma now, however, is which color to choose. Today I’d like to talk about my two choices: Selesnya (GW) Midrange and Simic (UG) Midrange.

I’ve been playing with this deck a lot lately, and sometimes it’s just plain dirty. It ramps up to cards like Angel of Serenity extremely quick, sometimes getting to 8 mana in 4-5 turns. But that’s not all. There are tons of benefits to playing white as your second color. While green is taking care of your damage, white can become control. Selesnya Charm takes out large creatures in the format, and Angel of Serenity takes out creatures those you don’t want to touch with a 10-foot pole (such as Boros Reckoner). The original build was done by Caleb Durward I believe, which basically consisted of the cards you see above, but it was running 24 lands, 4 Restoration Angels, and 4 Garruk, Primal Hunters. In their place I added in Loxodon Smiter, which I think you can’t go wrong with in any GW deck.

I also changed around the sideboard a bit. Instead of 4 Rhox Faithmenders for life gain against aggro, I felt like Trostani, Selesnya’s Voice would be better due to the number of Thragtusks and Garruks in the deck. The life gain is more immediate. I also added in 1 Grafdigger’s Cage because it does better against reanimator at the moment than Rest in Peace does. Ray of Revelation is usually sided in for Rest in Peace, but not too many reanimator decks are using Ancient Grudge at the moment which makes it that much more effective (not to mention totally stopping Angel of Glory’s Rise’s effect in Human Reanimator). I also thought that Pithing Needle is good against cards this deck is weak to, such as Nephalia Drownyard and Jace, Memory Adept. I’ll talk about this more in depth a little later, but now I want to take a look at my other idea.

This deck needed a lot of tweaking to become competitive in the current metagame, but with a splash of red it really took off. The deck is remarkably similar to the GW midrange deck, and I designed it to be so. One thing both are good at is pulling mana out of deck with cards like Borderland Ranger and Farseek, and ramping up to big spells/creatures with cards like Arbor Elf and Simic Keyrune. Thragtusk is still in there for life gain and Garruk, Primal Hunter is still releasing the hounds *cough* (I meant beasts), but that’s where the similarities end. This deck can ramp up exponentially faster than the GW white one due to the Arbor Elf/Elvish Archdruid/Gyre Sage combo. Domri Rade is also much better at pulling creatures out of your deck than Garruk Relentless is, and with Master Biomancer making your creatures huge when they come into play, Domri Rade’s fight ability becomes much more relevant (letting you take out more than 3 toughness creatures such as Loxodon Smiter, Angel of Serenity, and Thundermaw Hellkite).

How the Decks Compare 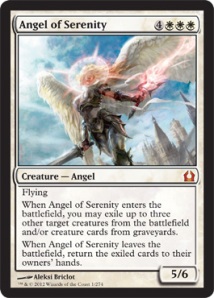 GW: Each deck has it’s own strengths and weaknesses. Green and White gives the first deck access to more aggressive early drops such as Loxodon Smiter and Restoration Angel. Both are great cards, especially against control, but even more so against fast aggro decks like Rakdos or Gruul. Avacyn’s Pilgrim lets the deck ramp up even faster due to it’s low casting cost, which in turn helps you get out Angel of Serenity around turn 5 or so. Gavony Township isn’t a card to be overlooked either. Even with minimum board presence, you can grow your creatures into big threats without overextending yourself against control decks, especially if you’re expecting a Supreme Judgement or Terminus.

After siding in, GW midrange has a much stronger game against Naya midrange with Blind Obedience, stopping Aurelia, The Warleader dead in her tracks. The deck’s weak point is card draw. Esper and Bant control tend to be problems for it. Yes it can ramp up to big creatures quickly and take a lot of mana out of your deck to let you draw cards more efficiently without getting mana flooded, but if you can’t keep the pressure on a control player, they’ll simply Sphinx’s Revelation again and again, using their card draw to out tempo you and steal the game. This is one of the reasons why Caleb Durward went with 4 Garruk, Primal Hunters main (so he could use them to draw cards), as well as his choice for Staff of Nin in the sideboard. Maintaining card advantage is definitely important for this deck. 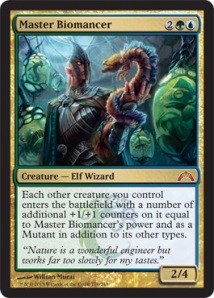 UG: Simic, on the other hand, is a little bit slower but has a lot more threats than GW does. The synergy between Arbor Elf, Gyre Sage, Elvish Archdruid, and Master Biomancer is VERY good. They create insane amounts of mana when on the field together which can be used to power an early Kessig Wolf Run attack. Although Gyre Sage will be worthless at first, when you start laying down Biomancers, beast tokens, and Thragtusks, it will eventually start pulling it’s own weight and become one of your heaviest hitters (that can also produce a lot of mana).

Card draw is much smoother in this deck thanks to Prime Speaker Zegana, Domri Rade (basically drawing you a card whenever it’s a creature), and of course Garruk, Primal Hunter. Due to the average creature’s power being higher in Simic Midrange, you’ll get a lot more value out of using his -3 to draw cards.

I also like that the Simic Keyrune is immune to almost all removal. A 2/3 Crab with built in Hexproof is a wonderful target for Kessig Wolf Run when you have the extra mana floating around. Simic Charm is also much better in this metagame currently than Selesnya Charm is. There simply aren’t enough creatures with 5 power or more being played at the moment that make the Selesnya Charm incredibly useful. Simic Charm, on the other hand, lets you return a creature to player’s hand (good both on offense and defense), gives your creature +3/+3, and it also gives all of your permanents hexproof (which causes anybody trying to Oblivion Ring or Detention Sphere your things to have to do it to their own). And if your opponent is overwhelming you with planeswalkers or creatures? Cylonic Rift their board at the end of their turn and attack on your’s with everything you have.

While the deck lacks life gain without Trostani, Selesnya’s Voice and Restoration Angels to blink Thragtusks, it does have Tree of Redemption which works both as an evolve trigger for your Gyre Sages as well as making it incredibly difficult for ground-based aggro decks to kill you (especially if you have some Master Biomancers to make your trees 2/15 or 6/19 creatures depending on how many are in play). Playing Simic also gives you access to a more permanent solution to Boros Reckoner with a playset of Rapid Hybridization. Sure you can take him out with Angel of Serenity, but there is always that chance that he’ll be back if you do so.

For the immediate future, I’m going to run with the Simic deck. Nobody is expecting it and it tested very well against aggro decks. It has a lot more answers to control (Simic Charm, Cyclonic Rift, Alchemist’s Refuge), and the potential size of its creatures is staggering to think about.

If you’ve never played a midrange deck before, here are some pointers:

That’s all I can think of for now, but if you  have any questions about playing midrange decks or about the card choices I made, please feel free to leave a comment. Thanks for reading and if you have these cards take midrange for a spin next week!