If you read my last update about the pre-release, then you’d know that I went 2-0-1 at the midnight pre-release with a Golgari/Simic build (which was great), and 3-2 with a Gruul/Izzet build (absolutely hate it). I had originally planned to use Rakdos on my last day, but at the last moment I went with Selesnya (because my girlfriend wanted the ‘cute’ Selesnya Tree pin).

I ended up going 3-1 with Selesnya/Gruul, making it all the way to final round of a 36 person event at one of the most competitive shops in Aichi prefecture, Big Magic. I finished in 5th place and got 7 booster packs as well as the 6 I got for the pre-release. Not bad for a days work. Some of the best players in the prefecture play there, and I was giving them a run for their money all day. How’d I do it? Well, I got some great cards and put together some sweet combos/synergies. Here’s some food for thought next time you’re doing sealed/draft: Angry Tokens 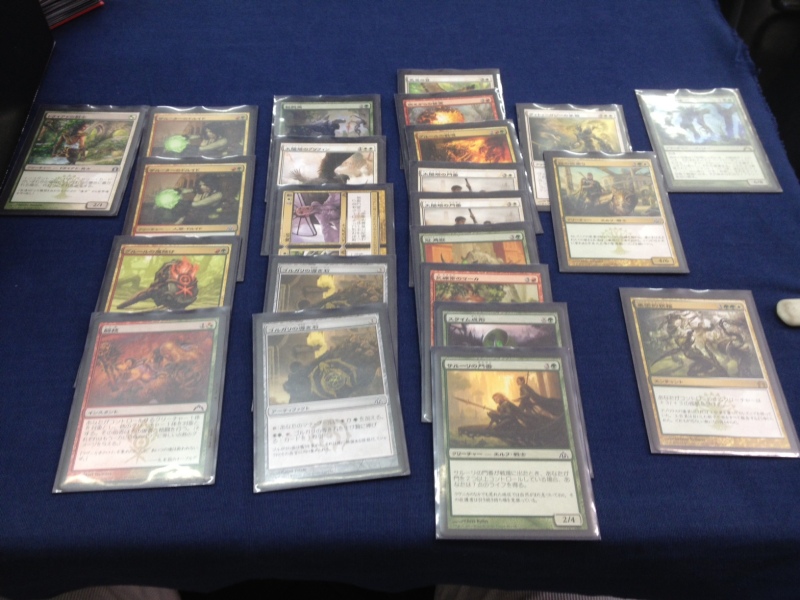 As you can see, I got some great bombs for limited in my 6 packs. Collective Blessing won me the game whenever I played it, and it combo’d well with Gruul War Chant. Giving every creature +4/+3 and only block-able by two more creatures was unfair. Gruul Charm was also amazing in this deck, as I could easily win the game if my opponent had no flyers to block with. I was also  lucky enough to get two Zhur-Taa Druids, which pinged my opponent each turn as well as accelerated my deck  much faster than it would have been otherwise. I found myself putting out Armored Wolf Rider and Scion of Vitu-Ghazi on turn 4 quite often, and with that type of pressure bearing down on my opponent there was little they could do expect block for dear life. The extra mana also helped me to put out a large Ooze token with Slime Molding around turn 4 or 5 as well.

Sunspire Gatekeepers was also great in this deck. I was playing with 4 Guildgates so about 70% of the time I was paying 4 mana for a 2/4 creature as well as a 2/2 Knight with vigilance. My deck was removal light, so I had to rely on cards like Pit Fight, Morgue Burst, and Cinder Elemental. Gruul Charm also came in handy against decks with multiple flyers. My biggest gamble was on the Golgari Cluestones, but it paid off. Aside from helping me smooth out my mana and getting me black mana when I needed it late in the game to cast both sides of Ready//Willing, it also further accelerated my deck in other bombs like Sylvan Primordial. One of the best wins of the pre-release was against an opponent that had used Detention Sphere on my Collective Blessing, only to have me destroy it with my Primordial next turn and have my bird tokens and Knights attack for lethal.

What I learned from the Pre-release about sealed

I learned quite a few things about sealed last weekend.