Bang For Your Buck: Investing in Cards for M14 – Selesnya and Orzhov

Bang for your Buck is going to be a little different this time. With the set rotation coming up at the end of September, the WHOLE Innistrad Block (Innistrad, Dark Ascension, Avacyn Restored) and M13 will no longer be standard playable. Therefore it’s kind of pointless to talk about those sets in this article. Of course some cards will maintain their value due to play in other formats (Take Griselbrand from AVR for example), but for the most part the prices are going to bomb. Today I’ll be focusing mainly on the Ravnica block sets (Return to Ravnica, Gatecrash, Dragon’s Maze). I will be covering the sets rotating out in less than 3 months in the series or articles following this one called “A Whole New World: MTG Post Rotation”. Those articles will be going up at the start of August and will cover what to invest in before the cards become hard to get. With all of that cleared up now, let’s take a look at the cards I think will be a good investment for the M14 metagame.

Just like last time, I’ll be focusing on the guilds, choosing one from the RTR set, one from the GTC set, and their corresponding cards from Dragon’s Maze.

If the format gets a little slower, I could see Armada Wurm ($3.50) seeing a lot more play. Yes, we are losing Restoration Angel, which will make it a little bit less fun to play with, but you’re still putting 10 power on the battlefield and there are quite a few effects that will let you either populate to make another token to return it to your hand. I think it’s a good buy around the $3 range. I could see it going up to $5 or more before rotation. Just like last time, I also think that buying some Sylvan Primordials at $1 apiece is a good. The metagame looks to be slowing down, and those big drops that do a lot (it destroys a permanent AND gets you a land) will see more play. I think it could go up to $1.50 or more.

Skylasher was a somewhat exciting card when it was spoiled. Finally a way to block Geist of Saint Traft as well as getting through a counter spell! Except . . . nobody is really using counterspells or Saint Traft at the moment. This card could be a late bloomer though. It’s a good deal at $0.85, and if counterspells become a big thing again during Theros, Skylasher will definitely see more play. Pick it up now, but don’t bet on the price going up until sometime late this year.

While it’s not a rare, I think Dryad Militant ($.40) could see more play and go up in value before rotation. It’s going to be a great one drop. Loxodon Smiter ($4) is going to be a staple in decks with green and white post rotation, so I think it will definitely hold it’s value, if not go up higher to $5. I think Trostani, Selesnya’s Voice will also hold her value at around $7 for the next month or two until the Theros release at the end of September. 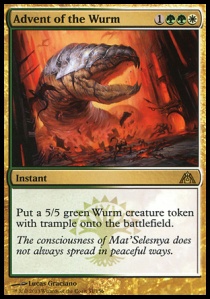 Advent of the Wurm

Advent of the Wurm has been EXTREMELY well to me, and it’s an absolutely amazing card. At $4.25, it’s a pretty good deal right now. The 4 spot in Naya, Bant, and Junk decks is going to be missing their Huntmasters, Sorins, and Restoration Angels, and this is a great card to fill that spot. I could see this easily becoming a $6 the closer it gets to the Theros release. I say but it now.

Voice of Resurgence ($44) doesn’t show ANY sign of slowing down. It’s going to be one of the best cards in the Return to Ravnica block for a while. If Theros prints a “hoser” card that gets this card under control I could see it dropping to $35, but I don’t think this will go anywhere south of $40 until November. If you get one, hold onto it. I’d also like to point out Skylasher (currently at $.90). The current format is chock full of white flyers such as Restoration Angel and spirit tokens, but after seeing the sheer number of flyers (especially in blue) in M14, I think this card will see more play in sideboards against control decks. I’m going to guess it will hit $2 not too long after Theros is released, maybe more.

There are a few good cards in Orzhov that I think will see more play as the metagame format slows down and goes back to 2 color decks instead of 3 color ones. Many people have been talking about it,  but it looks like Blue/Black control and mono black control are going to be some real threats in the coming months. I can’t wait to see what happens. I think Crypt Ghast ($2.50) will see some play, but his price won’t change too much from what it is now. I still think that High Priest of Penance ($.75) will see more play, but it hasn’t yet.

At $10, Obzedat seems like a good buy, but until Esper (BWU) sees more play, he’ll probably be stuck on the sideboards of GBW midrange and other decks. If you can get it for under $10, I say pick it up. He’ll see play again. 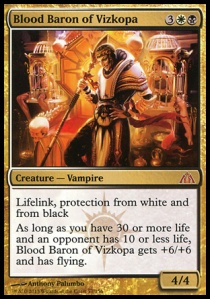 Blood Baron ($8) should DEFINITELY see more play in the future. With Bonfire of the Damned rotating out, there are going to be VERY few ways to kill this outside of a Mizzium Mortars. Doomblade does nothing, and it has protection from everything with death touch. The price might touch $7, and if it does pick them up. You won’t be sorry.

Speaking of bloody things, Blood Scrivener seems like it’s a good card, but it just hasn’t found it’s deck yet. It’s only $1, so it might be worth picking up a playset of 4 now.

I’m feeling pretty good about these suggestions for this meta. We’ll start getting data about it in a matter of a few weeks, so keep a close eye on big events and be sure to snap up cards for a good deals.  Next time I’ll be covering one of my favorite guilds Golgari. On the Gatecrash side we’ll be talk about Simic. Lovely lovely creatures with counter. Lots of work during the week for me, but I believe I should be able to get another article out on Friday. Thanks for reading and all comments are welcome!

← The Japan Metagame Diaries: Popping My Cherry
Bang for your Buck: Investing in Cards for M14 – Golgari and Simic →