The Japan Metagame Diaries: A Weekend in Magic Land 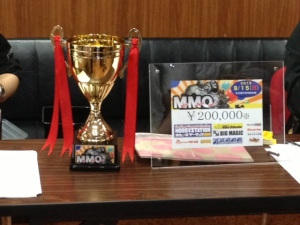 I’ve talked about it on and off in my blog, but this last weekend was the Magic Market Open (MMO) in Nagoya, Japan. What is the MMO? It’s the first non-WotC run tournament in Nagoya EVER. All you players in the USA are lucky. You have TCG Player 5Ks, SCG Opens, and other regional high stakes events. Japan has nothing other than the Grand Prixs and PTQs. This was basically a 2K event, with the prize for the winner being the equivalent of $2000. It’s not a lot, but it’s a start. Along with Saito Tomoharu’s store doing The Last Sun events up in Tokyo, Japan finally has some WPN events to help players earn points for events and to test their skills at a high level.

The event had WPN qualifier events  all over Japan since late June after the World Magic Cup Qualifier, and on September 15th, 240 players showed up to fight for the prize of $2000. The metagame this weekend was FULL of control. When I mean full, I mean there was a control deck in every possible combination. After 8 rounds of grueling play (for me at least), the top 8 consisted of: UR counter/burn (Delver/Pyromancer), Jund midrange x2, Jund Zombies, Junk (GBW) tokens, Bant hexproof, GB control, and mono red (maybe big red). When the smoke cleared, the unsuspecting UR Delver deck stood tall over everyone. I was as shocked as anybody that it won it all. It just goes to show you that no deck is better than others if people play well and draw the right cards.

I used my GW midrange deck and played UW control (lost 1-2), GB control (tied 1-1), mono white aggro (won 2-1), UWR control (lost 1-2), Grixis control (lost 1-2), UG Turbo Fog (tied 1-1-1), BR zombies (won 2-0), and BR control (won 2-0). I finished 3-3-2 mostly due to removing my control package from the sideboard because I hadn’t seen it for weeks in Nagoya. Figures the moment I do that EVERYBODY ends up playing control. Lesson learned: ALWAYS keep a balanced sideboard in this format. Things can change too quickly if you’re not careful and you’ll be caught with your pants down. This was a nice way to say farewell to Innistrad block standard because in all likeliness we won’t get a chance to play it again before everything rotates. Deck lists should be on happymtg.com (in Japanese and some English) sometime later this week if you’re interested. 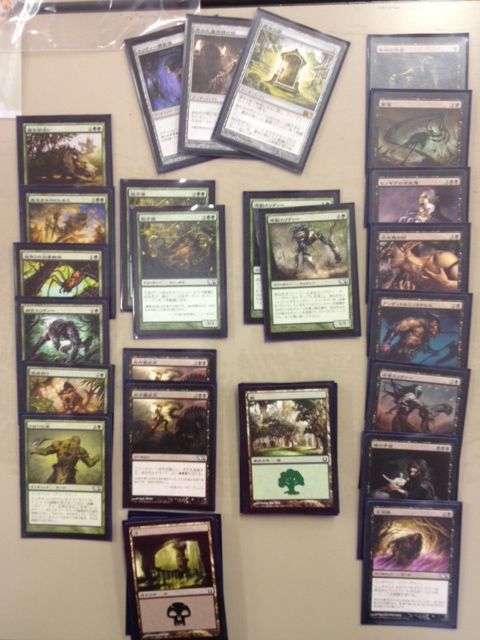 This weekend Nagoya also played host to a Pro Tour Qualifier for Journey into Nyx. This was the LAST M14 sealed PTQ to be held before it switches over to Theros sealed in 2 weeks. Due to a typhoon raging through the night and into the early morning, many players weren’t able to catch the trains to the event hall and we only had 87 players in total. I don’t have a lot of practice with the M14 sealed format, but I think I did alright. I went with GB (though my friends said I should have gone UB afterwards. I didn’t think I had enough finishers, but they said otherwise), and I think I had a decent deck. I made a few mistakes in choosing cards, but otherwise it was solid.

I had decent removal. I could kill creatures, get around indestructibility, and use one as either a way to kill or blast my opponent directly for the last bit of damage

With so much blue and black going around, Witchstalker was my all-star today. I would put Trollhide and Mark of the Vampire on him and just go to down against my opponent. I had a decent amount of strong slivers to, which also did a lot of work for me. Sporemound kept me in the game and gave me chump blockers, and Tenacious Dead kept coming back for more. I would have liked to have had more flyers, but I traded evasion for power and a long game.

I thought that the Door of Destiny would be good with my Slivers, but after making my decision I made the discovery that had overlooked Blood Bairn in my playable cards. It would have been great to have it in my main board as a way to activate Dark Prophecy with all the Saporling tokens and Tenacious Dead. I had the staff in there to counter the loss of life, but I probably could have played without that.

Anyways, thanks for listening to me ramble about the weekend. Check back soon for the start of my Theros limited articles, Playing to your Weaknesses!

2 thoughts on “The Japan Metagame Diaries: A Weekend in Magic Land”