During the Theros pre-release weekend back at the end of September, I ended up not participating in the Sunday events. The reason for this was that I was heading up to Nagano to spend time with my fiance and her family. We drove all the way from Hamamatsu City in Shizuoka prefecture to Iida City in Nagano prefecture. Thanks to Japan being extremely mountainous, we had to drive all the way through Aichi prefecture, and up to Gifu Prefecture before heading into Nagano. To make matters worse, it was a holiday weekend and the highways were packed. We had got on the road at 9am, but what would normally take us about 3.5 hours instead took us about 6 hours due to traffic jams near Toyota City and Okazaki. We did eventually make it up to the family house in Nagano and met with the family, and we had a nice time the following day going to temples and picking grapes off the vine.

We had some downtime in between dinner and arriving on Sunday afternoon after taking care of some family obligations, and thanks to me obtaining my drivers license here in Japan a few months early we were free to drive around. We headed to a local mall, and on our way there I convinced my fiance and her mom to give me 5 minutes inside a store that showed up on Wizards of the Coast’s locator. After about 10 minutes of driving, I found the place I was looking for, Heiando.

Heiando Media shop is in Iida City, Nagano, just off of route 153 (Sanshu Highway), a few minutes walk from Motozenkoji Station on the Iida Line. I believe you can get to this station from both Toyohashi and Nagoya on the Iida Line, but trains probably aren’t that frequent. You probably won’t be going to Heiando if you live in Nagoya though. No, this is a store for those MTG players stuck in deep deep inaka (the countryside). However, if you can make it to this place, it’s not that bad at all. Heiando is a DVD rental, manga, CD, and overall media shop in Iida City. It has quite the large selection of movies and manga, and if you live in the countryside you probably have a lot of time to rent and read those. 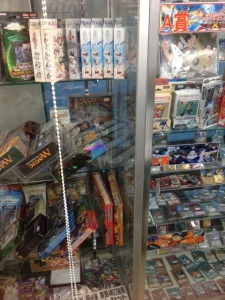 The store has a limited amount of goods there. You can buy the duel sets, booster boxes, and booster packs of the most recent sets, but they do not sell any single cards if that’s what you’re looking for.

The gaming area is a little small, only able to hold about 20 people or so, but they do hold weekly FNM tournaments, pre-releases, and other events such as Game Day and Magic Celebration. I believe they also said there was a weekend tournament on Saturday or Sunday sometimes, so be sure to check out their schedule if you go there

If you live in the countryside of Nagano, I weep for you. There are some hardcore players (Team Chagam Fireball, or Team Roast Duck) that come down from Nagano prefecture for Pro Tour Qualifiers and other big events, but outside of the Matsumoto and Nagano area, it’s a desolate wasteland for MTG players up there. Hopefully I’ll be able to drive the car a little farther north next time to check out the other stores in the prefecture, but for now I hope this helps out the few brave souls that are out in the countryside! There are tons more MTG store articles in the works, so be sure to check out the “Magic the Gathering in Japan” link at the top of the page for new info from time to time. I’ll be back in a few days for some MTG financial information, so I hope to see you back then. Thanks for reading.

← Hail Hydra!
Bang for your Buck: Investing in Cards for Theros – White, Azorius, and Boros →