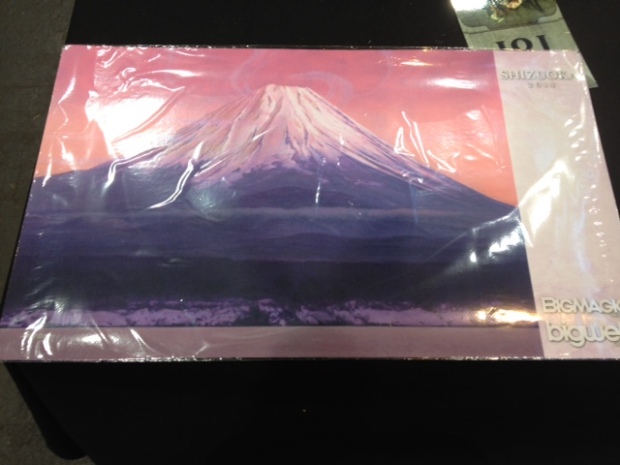 Work It Harder Make It Better
Do It Faster, Makes Us stronger
More Than Ever Hour After
Our Work Is Never Over

Ryo Nakada Vs Nakashima in the semis

Grand Prix Shizuoka will be one to remember for a number of reasons. For those of you that followed the coverage and read the articles about it online, you’ll know which decks were played and that through all the mono blue devotion, UW/Esper control, and black devotion decks, it was 2 white based aggro decks that were in the finals. This in and of itself is pretty amazing. People had been saying aggro was dead and that it simply could not win against such a removal heavy metagame, but both Ryo Nakada and Shota Takao proved the non-believers wrong. While the level of competition and depth of the meta game are both important in creating a good Grand Prix, there were a few more things at Shizuoka that made it great.

While it’s been said time and time again that the Judges are the most important and hard working people at Grand Prix events, I don’t think most people realize what kind of effect they have on events. The quality of judges, organization, and speed of decisions is what makes or breaks GPs. Grand Prix Shizuoka seemed to be the culmination of all the hard work to fix the mistakes that have plagued large Magic events for the past few years. I’ve only been to a few Grand Prix, but Shizuoka was one of the best run events I’ve ever been to. There have been many changes in 2013, and they were all implemented flawlessly at this GP.

While these things added to the ease of play at the event, there are a few things that I think could still use some work. First off, due to the earlier start times and no Saturday registration, I think more people will be doing sleep in specials in the future. However, I believe that $20 is too expensive, especially for players that have worked hard to get 2 or 3 byes before the tournament. This cost should be topped at about $10 I think, especially if GPs are performing more efficiently due to earlier start times and no Saturday registration.

I’d also like to see more events utilize the QR Code reader system where you scan a bar code with your smart phone to access a website that has pairings for each round (GP Shizuoka had it, but you could only find the code on your deck list. If you didn’t scan during that time, it was hard to find another way to access the QR code site. I arrived with very little time before having to turn in my sheet, so I wasn’t able to use it. There were also problems for the first 3-4 rounds with it). I’ve done this at Pro Tour Qualifiers and at last year’s World Magic Cup Qualifier, and it makes it so much easier for players to find their seating arrangement instead of crowding the walls to find their name and to push through everybody. I’d like to suggest that judges add this computer skill to their repertoire to make both their job easier and to start rounds faster. The QR code should also be posted in places around the event so that players who missed doing it at the player meeting can use it at any time. The event could be further shaved by about 30-45 minutes if they implement this system I think. 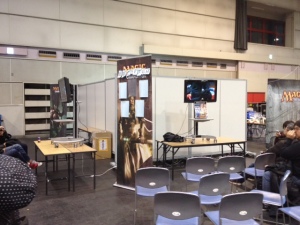 For your Viewing pleasure

2013 was also the year that coverage changed for Magic the Gathering events. After the article on SCG’s website about the problems with MTG events this summer, various MTG news outlets, as well as Wizards of the Coast have been restructuring how they do things in order to create better content for their readers as well as to grow the interest from competitive players to casual ones watching from home. WoTC has recently implemented a ranking system, SCG has created a coverage specific “News Team” of sorts, and many other companies have followed suit as well in response to this article.

At GP Shizouka, Big Magic and NicoNico Douga worked in conjunction to create one of the best spectator GPs I’ve ever been too. There were TVs and chairs for viewing around the event hall, with Big Web promoting events all day, and NicoNico conducted interviews with players, artists, and other personalities. Shuhei Nakamura himself was doing coverage for the event instead of playing. The event was very accessible to people watching from home, as well as for those players that were just enjoying the atmosphere after their games were done. TokyoMTG also worked hard to give us even more content to look through such as behind the scenes interviews, vintage coverage, and also tweeted information in both Japanese and English to help those who were not Japanese players.

Not everybody was able to make day 2, myself included. Quite a few Nagoya players made it to Day 2, but only one person in my play group made it. It was his first day 2, so we were all pretty excited for him. For those of us with nothing to do on day 2, many people turn to side events. The was an insane amount of side events going happening on Sunday. There were your 8 man standard events, sealed/drafting, the Super Sunday Series (both Sealed and Standard), legacy, and much more. Along with the artist signings, on-site shops, and coverage, I felt like there was always something to do. While I had breaks in between the Super Sunday Standard rounds, I found myself wandering around to say hello to people, to talk with friends doing other side events, or to just watch TV. It was great. It felt like the GP wasn’t just for those players that made day 2, but rather all players had a way to enjoy themselves in one way or another. There was no shortage of players for these events either. There was a lot of interest in all of them.

It goes to show you that, “if you build it, they will come”. If you provide the options, people will participate in these events. Down below you can see a picture of a “Grand Melee” standard side event. It was a giant 86 person game where you could only attack the person to the left of you. Players laughed as had a great time as players attacked one another with 300+ damage a turn, put tons of tokens on their board, and one player was even playing a Maze’s End deck which killed the player to his left whenever he played a Mazes End from his hand. Good times were had by all, and santa hats were also provided ^_^.

GP Shizuoka was the result of ‘organized play’ getting better and the Magic community in Japan getting stronger, but it also helped me to become a stronger player. This event was the first time I ever used a “real” deck at a major event. I had always used the deck I wanted to play, and tested it until I bled, but for Shizuoka I decided to go with a Black devotion deck that splashed green for Abrupt Decay, Golgari Charm, and Mistcutter Hydra among other cards. I had attended events in Nagoya and exhaustively followed the metagame (I think I did pretty well with my prediction of the meta in my previous articles before the GP), and I had done fairly well with the deck. I had a winning percentage and felt like the deck dealt with a lot of strategies well, but sadly only 3 weeks of practice prior to the Grand Prix showed my inexperience with the deck.

I ended the day at 4-5, which is unfortunate since I had 2 byes going into this event. I learned that black devotion decks need to be jammed full of removal to survive in the metagame, and in next year’s PTQ season, I plan on using B/w instead to help with both removal (Last Breath) and to fight the mirror (Blood Baron of Vizkopa). It would have been great to test more with this deck to and learn that I needed more removal before this event, but when you work full time there is a trade off between skill and free time.

On Sunday, I participated in the Super Sunday Standard Series and did much better.

I made some changes prior to the last time I talked about this deck. I had a feeling like there would be a lot of black and control at the event, so I wanted to add some anti-control elements into the main deck while still keeping the aggressive nature of red devotion against slower decks. I had tested with this deck for about the same length of time I tested with B/g devotion, but this deck is by far a lot easier to play. Red devotion is one of those decks that just wins out of nowhere. It could be a totally helpless game, then suddenly you draw a card that sets a combo in motion that deals an insane amount of damage. I finished 6-3, just one win short of prizes, and I think I could have finished 8-1 if I had made some better choices when keeping hands and sideboarding. Again, this is a deck I don’t have a lot of experience with, but it is a lot easier to play than the mono black devotion decks I played with on Saturday.

I’m in no way ashamed of my record on Sunday. I ended up winning more games than I did on Saturday, and I finished 19th out of a total of 194 players. I learned that I need to work on sideboarding more, as well as to know what hands to keep versus certain decks. I’m really liking Red devotion in the current metagame, and I will continue to use it up until after the PTQ season starting in January. The deck does well both on offense and defense, and it also can win out of nowhere thanks to Nykthos, Shrine to Nyx. Mono blue devotion might prove to be a problem if you don’t draw Mizzium Mortars early, but I feel like it has good match ups against black devotion, Esper and UW control, and that is can also hold it’s own against Green devotion decks by playing defense and scaring opponents away with Boros Reckoner. If aggro decks such as Nakada’s Orzhov aggro, or the Esper aggro build become popular in the coming weeks, red devotion should be well poised to deal with it by using Mizzium Mortars and Anger of the Gods. I recommend you try it out if you’re not sure what to use before Born of Gods is released in February.

Our Work is Never Over

There isn’t much time left in 2013, so this might be one of the last major articles I write before the new year. If you liked it, please share it with others! Things will start to pick up after the new year with the start of spoilers from Born of Gods, and a full spoiler should be released sometime around January 27th. As always, I hope you visit The Japan Hobbyist often to check out my articles “Play to your Weaknesesses” dealing with the strongest cards in limited, “Bang for your Buck” dealing with the financial impact of the new set, as well as how I think the new set will impact standard. I want to thank all of you that have followed my blog through 2013, and welcome all the new readers who have recently started looking at my website. I should have one or two more posts before January 31st, so be sure to check back before the New Years! If you don’t come back before then, happy holidays!

← Welcome to Silent Hill (spending time in Shizuoka city)
The Japan Hobbyist: 2013 – A Year in Review →