Bang for your Buck: Investing in Cards for Journey into Nyx – Black, Orzhov, and Dimir

The first weekend of Journey into Nyx standard is finished, and it is wayyyyy to soon to see which decks will be king of the hill in the metagame. In Nagoya, I saw quite a lot of aggro decks (BR, GW, RW), a decent amount of BW midrange decks, and even some mono blue devotion decks. The word on the street is that black aggro is back, so that we can expect a lot of UB, BR, and GB aggro decks in the coming weeks. Master of the Feast and Desecration Demon are making for some ferocious turn 4s and turn 5s. Mono black control should continue to be popular in this new metagame, but I think these new aggressive black cards will push black aggro to the next level. Before we check out today’s choices, let’s see how my picks did last time.

I did much better with my black cards than I did with any other color in Born of the Gods, and I think that’s largely because black has been so oppressive in the metagame over the past few months. What will happen before summer? Well, let’s take a look at how the old standard cards mix with the new Journey into Nyx cards. I personally expect Athreos to push a lot of cards up depending on which deck with him does well.

Agent of the Fates

If mono black aggro does become big, I’d expect Agent of the Fates to see some movement. I’ve been playing him in my block constructed UB aggro deck for the Pro Tour and he’s been pretty strong. It saw some brief sales about a month and a half back due to people trying out black white aggro/humans, and I think he’ll see more play during JOU standard. He’s only $0.50 now, so pick up a play set before he doubles or triples in price. Things like Strive are really going to supercharge heroic decks in the coming weeks.

Desecration Demon ($4.50) and Pack Rat ($2.25) both saw a big dip in value, but with black aggro on the return, I’d expect both to go up in value again. They won’t be at Theros standard levels, but I could see Desecration Demon at $7 and Pack Rat at $4 in the coming months. Like I said above, Master of the feast and Desecration are VERY scary together on the battlefield, and with the new Orzhov god Athreos, Pack Rat will be less of a liability against control decks I think.

At $5, Hero’s Downfall is a great value. It’s a powerful card in standard, killing just about everything, and now that black decks have Silence the Believers, they’ll have great removal packages that can kill just about everything. I don’t really see this going any lower in value, and there will be a lot of people jumping into Black/x aggro in the coming weeks, pushing it’s price up. I don’t think it will hit $14 again like it did in Theros, but I could see it settling between $7 and $9 before M15 comes out.

Pain Seer ($2) is another card I think you should look out for in this new standard. Quite a few black aggro decks are running it in order to get some card advantage, and alongside all of the removal black has, you should have no problem attacking with it unharmed a few times. I don’t think he’ll go up too much, but I could see $3 after the Pro Tour. He already has a 500 yen price tag in Japan. Thoughtseize is still a good deal at $17.50. Sure it will still be opened from time to time, but as time wears on we’ll see it opened less and less. By rotation, I expect the price to be closer to $20 as black positions itself to still be a top tier deck in October.

My last suggestion for black today is Xathrid Necromancer. He saw prices of close to $6 before the event deck was released, but now he’s only $1.50. BW Humans will be back thanks to Athreos (sacrifice all your creatures, get 2/2 zombies, and unless your opponent pays 3 life for each of them, you’ll get those creatures back in your hand the next turn).  Yes it will be rotating in October, but I think it’s worth getting a playset now and selling it when the price gets to around $5 this summer. I think it will be good.

At $7.50, I feel like Ashiok is worth picking up, even if he doesn’t have a home right now. He sees play in UB control, but that isn’t really a Tier 1 deck. I personally think that Turn 1 Thoughtseize, Turn 2 Brain Maggot, turn 3 Ashiok is pretty strong, and I wouldn’t be surprised if people think so as well. I don’t think he’ll drop much more if at all, in fact I think he’ll start creeping up over the next few months. Keep an eye on Ashiok. 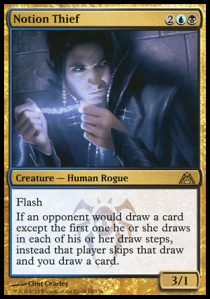 My gambit for this set is Notion Thief. He works very well with Master of the Feast and Dictate of Kruphix, and I wouldn’t be surprised to see them all working together in a UB tempo deck. You could be drawing 2 extra cards or more with him in play, and your opponent still has to deal with your 5/5 flyer somehow. He’s only $0.50, so I don’t think it would be a waste to pick a play set up for $2 total right now. At worst, he’ll make for some great FNM tricks.

THIS GUY is the card to watch in the future. I’m currently testing out GBW reanimator for the Pro Tour as well, and Ashen Rider is absolutely bonkers in it. Playing him as early as turn 4 (thanks mana creatures!) can be back breaking to an opponent. I was lucky to pick a play set up at 100 yen and 150 yen each (about $1 each), as more people discover how good it is, the price is only going to get him. I think Reanimator will become slightly more popular this summer and push his price up to $2.50 or from his current price of $2, but come October I wouldn’t be surprised to see that double or triple to $6.

Going back to the Atheros BW aggro deck, I think Cartel Aristocrat ($0.25) and High Priest of Penance ($1) are good pick ups. They help with devotion and have some great synergy with the Orzhov god. Obzedat and Blood baron might also be in this deck to help with devotion, but I don’t think their prices will change much from $9 and $14.

Well, that does it for black. Born of the Gods corrected a lot of the overpriced cards from before, but we should see more demand and prices rising in the coming weeks. Red, Rakdos, and Gruul will be in the next article sometime next week, so be sure to check back then. We covered some Boros cards the other day, but next time we’ll be able to see how mono red aggro, burn, BR aggro, and Jund faired. Until then, thanks for reading and share the info if you like it!