The Japan Metagame Diaries: GP Kobe and the Rise of Kaiju Affinity

What do you get when you take a monster that continues to grow and brings overwhelming power to the board and add a giant pair of robotic, damaging scisssors to mix?

Well, I’d say that is pretty close (minus the bad dubbing of course)

As I watched fellow Nagoya player (and my local game store hero) Goto Yuusei go 9-0 on day one, then make it into the top 8 with only ONE loss, I couldn’t help but think I was watching somebody control these monsters, these Kaiju, to do their bidding. Time after time Goto-san would swing for huge swaths of damage, like Godzilla’s tail swinging around and laying waste to an entire battalion of  tanks. Once an opponent’s forces and life had been decimated, he’d summon a (Galvanic or Shrapnel) blast of unbearable heat to finish them. 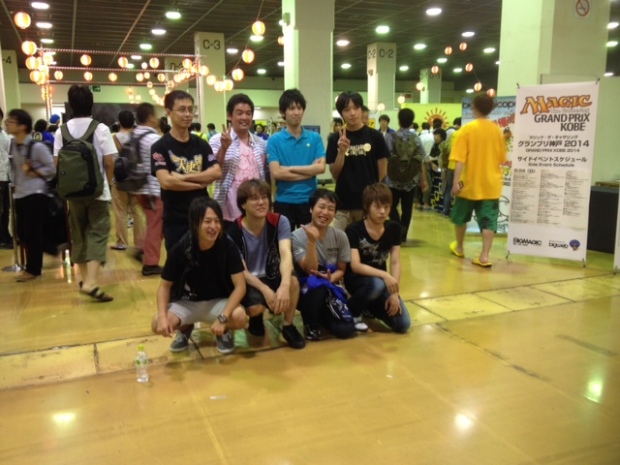 Goto Yuusei and Sawada Ken from Nagoya in Top 8! (in the middle, front row)

If you’ve played Affinity (or against it) before then you probably know how it plays out. You play a critical amount of zero casting cost cards drop your hand (or close it) on the table turn 1, then follow up in the following turns with a Cranial Plating and Galvanic Blast to inflict a lot of damage. As it was said in his deck tech on Wizards’ website, he basically stripped away a lot of affinity’s win conditions such as Steel Overseer, Arcbound Ravager, and dropped Inkmoth Nexus so that he could stuff the deck full of power 2 drop spells like Tarmogoyf and Ensoul Artifact. He also added more burn to maximize the effect of his artifacts in case they were to be destroyed (ie Shrapnel Blast’s effect instead of having a Ravager). I also believe that Chromatic Star fills the spot that Thoughtcast usually does in affinity decks. The benefit in this deck is that it lets you draw a card while also adding to Cranial Plating’s power and giving you a more versatile mana base for the deck (which is basically 5 colors when you consider the sideboard).

The first time I saw this deck was at a PTQ in Nagoya back in July (When I talked about Ensoul Artifact’s impact on my blog previously.). Goto had finished in 4th place at that time, and had a few problems with his build but it was still promising. You can compare his current build above with his previous one in this diary note post. As you can see, the older deck still clung to the more traditional Affinity pieces of Signal Pest and Arcbound Ravager. The Arcbound Ravagers later became Thoughtseizes, and the Signal Pests became Chromatic Stars. I personally like this move. Time and time again my fellow Nagoya players had talked about the benefits of having Thoughtseize in your main deck, and aside from the information you get (which lets you shape your plays over the next few turns – very important for aggro decks like Affinity) it also can drastically weaken your opponent’s strategy by taking their only piece of removal or a combo piece. 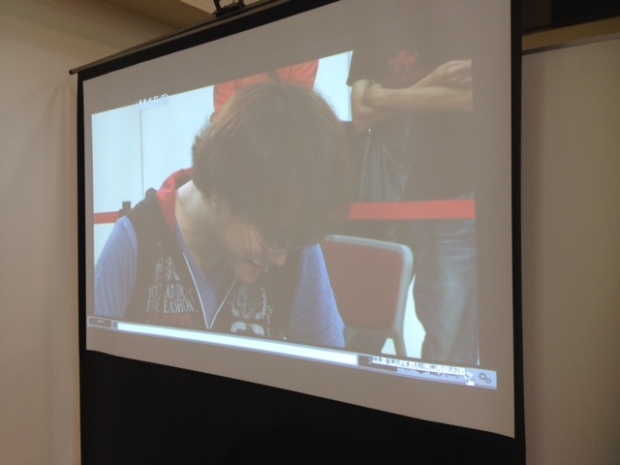 Goto going into the finals at GP Kobe

I’m sure there will be a lot of discussion on his deck in the coming weeks on the message boards over at MTG Salvation and elsewhere, but being a good acquaintance and fellow Nagoya MTG player, I had the chance to sit down with him a bit before the Finals to learn about him a little bit more and to talk about his deck. I know you all want to dig into the meat of the deck, but being a relatively unknown player outside of Nagoya (he’ll always be my LGS Hero now though!), I’d like to start off with some information about who Goto Yuusei is. 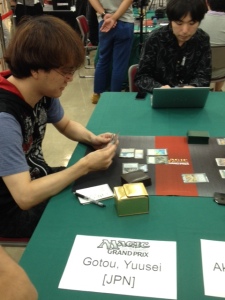 Goto Yuusei is a long time player of Magic the Gathering from Nagoya, Japan. He started more than 16 years ago when he was a junior high school student when MTG was first released in Japan. He enjoys all of the constructed formats (Legacy, Modern, Standard), but isn’t really big on limited or casual formats like EDH. Unlike a majority of people (myself included), Yuusei never stopped playing Magic and because of that has a deep understanding of the game, strategies, and of course the cards. It’s become sort of a sixth sense for him to pull cards out of memory when helping people build their decks and has also come into play when he plays against people.

I can vouch for Josh Bennett’s statement that he is known as a prodigious deck builder in Nagoya. I’ve played against him more times than I can count (he usually only plays at the FNMs and other events near my apartment in the Kanayama area of Nagoya.) and I’ve lost against him more times than I can count too. He was one of the first players I met when I originally moved to the city back in 2011. Playing against him is probably one of the reasons why I’ve improved so much in such a short period of time as a MTG player, and his suggestions in my deck building processes has also helped immensely. His decks are usually way ahead of the metagame, and he’s also not afraid to try out a new one every tournament if one doesn’t work (which means he could switch between 2-3 decks in a week). For standard, he told me that he looks at all of the strong decks from that season and then proceeds to pick apart and work on building a deck that is strong against the majority of the metagame.

That would probably explain his prolific number of wins in Nagoya.

For somebody that  has developed into such a strong player since he started, Goto-san hasn’t been to that many large events. His first GP was during the original Mirrodin block at GP Shizuoka, but including that he has only been to 7 his whole life. However, he’s made Day 2 in more than half of those (4 times), and always finished near the Top 8 before reaching the finals of GP Kobe. He’s also won 2 PTQs, but never went to one. This can be due to his job/work schedule as well as his dislike of traveling long distances (though I’m sure if the Pro Tour was in Japan again he’d be there in a heartbeat! Sadly, he said he probably won’t be able to go to Hawaii for PT Khans of Tarkir either. I sure hope he can manage it somehow though.). 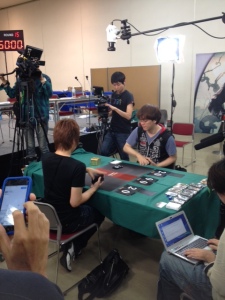 The Japan Hobbyist: When building decks, what do you struggle with the most?

Goto Yuusei: I find that the hardest thing is finding a good synergy and balance with the cards. Sometimes you’ll make a deck and it will be close to working but not there yet. It takes a lot of trial and error but is very rewarding when it works like I want it to.

TJH: We all know that you used the now famous “Tarmofinnity” deck (which I’m going to call Kaiju Afinnity from now on) for GP Kobe, but I’m sure people would like to know why.

Goto-san: While doing research for the Grand Prix, I realized that the strongest decks would probably be GB, Affinity, and RUG Twin so I basically took what made these decks strong and fused it into one deck. What I ended up with was a deck that was lightning fast with strong cards that could hit early and hit hard.

TJH: Tell me a little bit more about this. What is the main strategy of the deck and how does it accomplish it?

Goto-san: The main strategy is to play Tarmogoyf and Ensoul Artifact early, hit them hard, then finish them off with Galvanic Blast and/or Shrapnel Blast.

TJH: That sure does sound like a god hand if you get it, but what are key cards in this deck to make it work? What card is the strongest?

Goto-san: Shrapnel Blast. I always want to draw it or have it in my opening hand. Five damage is huge, especially if you’re attacking with your big creatures early.

TJH: What kind of cards do you want in your opening hand? Why? 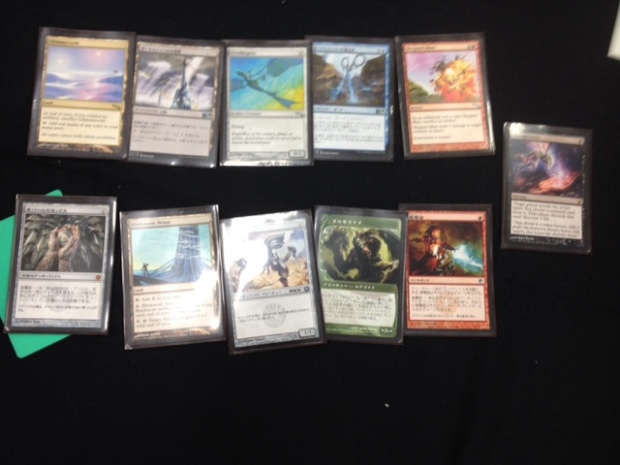 A good hand for Kaiju Affinity

Goto-san: This a good sample of what cards you would want in your opening hands. First you need colored mana, which you can get from either Glimmer Void or Mox Opal. This is very important in order to cast your big threats early. For land, Darksteel Citadel or Blinkmoth Nexus would suffice. As you can see, Darksteel Citadel provides an indestructible creature in the Ensoul Artifact hand while Blinkmoth Nexus lets you activate its ability in order to turn on Mox Opal. Of course that means you’ll need a zero casting cost artifact creature as well. Ornithopter is better in the first hand because of the evasion. It potentially becomes a 5/5 creature with flying when you enchant it with Ensoul Artifact. Having Ensoul Artifact or Tarmogoyf is also very important in the opening hand if you want to reach critical damage quickly. I also want to have burn in my opening hand, as it helps you to end games quickly. And of course Thoughtseize because well . . . it’s Thoughtseize.

TJH: How is the deck positioned against others in Modern? Where is it strong/weak?

Goto-san: Most decks struggle with its speed and power. Your typical combo deck usually combos out on turn 4, Scapeshift needs 6 lands in order to go off, and even fast aggro decks like Affinity have trouble dealing with its strong defensive powers. (Though as I saw during the finals, Goto struggled a bit with RW Burn. Kakumae had god hands heavy with removal and all his cards could pretty much bypass Goto’s creatures and hit him straight in the face.)

The Japan Hobbyist: A second place finish at GP Kobe is pretty awesome. What happens next? What are you looking forward to?

Goto Yuusei: I want to enjoy the spotlight as long as I can. I’m looking forward to hanging out with my friends, celebrating, and hearing everybody say “congratulations”.
Well, you definitely deserve it Goto-san. Let me congratulate you once again on this great finish and say that I look forward to playing against you again soon! Thanks for reading and if you have any other questions for Goto-san or about Kaiju Affinity (aka TarmoAffinity), please leave a comment below and I’ll do my best to ask him next time I see him.

One thought on “The Japan Metagame Diaries: GP Kobe and the Rise of Kaiju Affinity”