Khans of Tarkir: Playing to your Weaknessess – Blue

(NOTE: “Playing to your Weaknesses” is a series of articles I have been doing on my own blog since Avacyn Restored that cover all of the uncommons and commons in a new expansion and which ones I would choose to use as one of the 23 cards in a 40 card limited deck. For those of you uninitiated to limited, it simply means sealed and booster draft, where you open packs and then proceed to make a deck out of them. I’ve purposely left out the rare cards because it is much more likely that you’ll see multiples of uncommon and commons in your packs/pools.

As for my rating system, I’ll merely state if it’s a high, medium, or low pick in draft. HIGH means that you should take it as soon as you see it (if it’s in your colors of course). HIGH picks won’t come around the table a second time. MEDIUM picks are cards that have good synergies with other cards and are great at filling your mana curve or acting as role players. These cards might come around a 2nd time if you pass on them, so if there is another card that ranks higher, take that one and wait for this to come back. LOW picks are cards that are leftovers. Maybe you need a 23rd card for your deck to round things out – THAT’S what a LOW pick is. You can take these ratings to mean the same for sealed as well. )

Today I’ll be talking about the blue cards in Khans of Tarkir that I think will be good in limited. Blue seems to like combat tricks a lot as many of the cards have the Prowess mechanic on them, and it also tends to naturally have more flyers than the other colors. The only drawback is that many of these flyers cost more mana than something in white. I don’t have too much time to dilly dally today, so I’ll get right down to my evaluations.

The first card I’d like to look at in this article is Taigam’s Scheming. It might not seem like much since it doesn’t give you card advantage or affect the board, but as we’ve learned from the Scry lands from Theros block, being able to manipulate what your next card is going to be can be very powerful. You can put a land you don’t need on the bottom, or set up the board for your play next turn. If doing that with only 1 card is effective, imaging doing it with FIVE. You can always build a good limited deck, but it will still be a crap shoot. Sometimes it’s the luck of the draw that determines the winner. This card lets you put your removal on top, throw away your land you don’t need, or put your ringer on the top of you deck to take control of the game next turn. While I don’t think I’ll take it early, this would be a good card to even out your 23 card deck with. If I was having trouble deciding what my 23rd card would be, this would probably be the best candidate.

Singing Bell Strike is cheap removal in blue that has a draw back: your opponent can pay 6 to untap it. The Jeskai colors are very aggressive however, so there is a good chance you can have the game in control by the time they are able to untap it on turn 6. Personally, I’d rather take this than a bounce spell because the effect slows your opponent down whenever the creature taps, and not the one time you would bounce it. Seems like it would combo well with the white card Dazzling Ramparts too. You don’t want to be stuck without any disruption in your limited deck, so I would consider taking this around the middle of the first pack, and maybe 5th-6th in the following packs. Not amazing, but it will give the other player headaches.

This guy reminds me of that 2/3 Triton guy from Theros that also had the same sacrifice ability. The difference is that for one extra mana you get a 2/2 flyer. This is what you would call a roleplayer in your deck. It fits well in your curve, has evasion, and a cute special ability that might be useful down the road. You don’t want to take it early, but also don’t it to be the last card you take in draft. Get him after the first few picks.

Again, nothing too special about these guys other than the fact that they are 4/5 flyers that can sometimes be pumped up. They can block that white 5/4 flyer and trade with it, and also come down a turn earlier. Six mana doesn’t seem like it’s too high though, and I’d gladly pay it for their evasion. The sad thing is that you’ll probably only be playing 5-6 spells to help activate their ability. Like the 5/4 Venerable Lammasu, there are very few things that can deal with it in the air, which means most likely you’ll have air supremacy when you play it. I’d take this card somewhat early in draft. 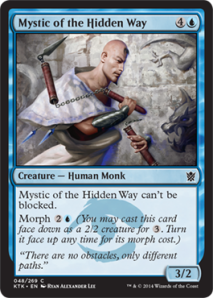 Mystic of the Hidden Way

There’s no better evasion than “can’t be blocked”, so you can basically change this text to say “Mystic does 3 damage to a player every turn”. He’ll be a great way to put pressure on your opponent and to force them to use their removal. With his morph ability, you can get an attack in for 2 on turn 4, then flip him the following turn and attack for 3. So far I haven’t see too many first pick cards in blue, but there are quite a few that I wouldn’t mind being part of my Jeskai or Temur decks. 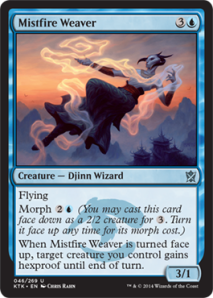 The morph ability won’t be that great in limited, but it will make for some interesting reactions from opponents that try to get rid of your finisher and find out it’s protected. You’ll have to be careful not to rely too much on your targeted removal if your opponent is playing blue and has 3 mana open when they swing for lethal. The moment you forget about him is the moment you pay. He is also a decent flyer with 3 power, but pretty much anything can trade with it in battle. Not sure I would take it early, but I would definitely want it in my deck. It would be a higher pick in packs 2 and 3 than in pack 1, that’s for sure.

Another roleplayer. It fits well in the 3 drop position, has flying, and can be pumped up from time to time thanks to Prowess. I’d probably take this over the heavier costed creatures, especially if I was focusing on an aggressive Jeskai deck. In draft I’d probably take it somewhat high after my first few creatures in order to lower my curve and add more evasion to it. Easy to take out in battle, but uncontested it can sneak in for a decent chunk of damage. The drawback is that it isn’t such a great card later in a game. 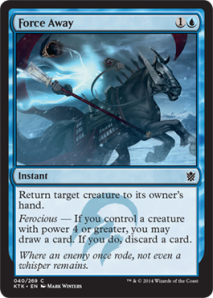 Well, here is our Unsummon of the set. Pay 2 mana, get rid of a creature for one turn. If you’re playing Temur and have a 4 power creature, you get to “loot” as well. I can actually see this being of more use in an aggressive Jeskai deck because it pumps up your prowess creatures and also clears a path. There’s a good chance one of those Jeskai cards will reach 4 power when you play it, so the second ability should activate too. Otherwise, I’m sure it would be an okay card in a Temur strategy. Hopefully you have lots of big creatures if you’re playing RUG, but I’m hesitant. Do I want to be playing this or another big creature if I’m in Temur colors? Still a decent pick in draft though.

Tempo and cantrip. I like it. I believe this card was in Avacyn Restored before, and it’s welcome back. I’d much rather have this than the previous card that returns a creature to an opponent’s hand. In limited this can be really useful. Tap a creature before attacking, force them to block unfavorably, and draw a card to replenish itself. As far as blue removal is concerned, I’d take this rather highly, especially in packs 2 and 3. If you’re only playing 6-7 non-creature cards then this is a good one to have. This is a card you definitely won’t see a second time around the table if you pass on it.

It has a decent casting cost and being able to pump it up to a 6/1 is pretty good if they don’t have anything to block with. It’s a solid card, but not something I would take early. Another 5th or 6th pick.

I’m kind of disappointed in blue, at least in the commons and uncommons. There are some playable cards, don’t get me wrong, but blue feels more like a support color meant to be played as a splash in Jeskai, Sultai, or Temur decks instead of playing a leading role. Even the rares don’t seem as powerful when compared to the other colors. Knowing the overall power level of blue, I’ll be hesitant when building my decks. I’ll be working on black tomorrow, so be sure to check back then for the new article. If you have any comments, please leave them down below!