If you have been following my blog for a while, then you probably remember that I make a post at the start of every new standard season. Rock, Paper, and Scissors symbolize what we in Magic call Aggro, Control, and Midrange decks. Khans of Tarkir brought with it a myriad of possibilities. At the start of KTK standard, players were abuzz with what some of the pros were calling “transformational sideboarding”. Players could basically choose a color combination like Jeskai and make an aggro/tempo deck, then instead of siding in specific cards for their match up, they’d throw their opponent a curve ball and turn their deck into a control deck. It’s nothing new, in fact I remember seeing Saito Tomoharu popularize Esper Control into Midrange (of sorts) during the Return to Ravnica block. He’d side out all his control cards and side in cards like Archangel of Thune and Soldier of the Pantheon in order to get his opponent to side in worthless cards against him or to take out all of their removal. It can work rather well if you opponent isn’t prepare for it.

Fate Reforged is taking this idea to an entirely different level.

With the new set, we choose a color combination such as Jeskai, Mardu, or Abzan and play all 3 types of decks with it. No longer will blue have the monopoly on control decks or red be the go to aggro color. As we saw in Khans, Abzan Aggro, Abzan Midrange, and Abzan Planeswalkers (control) proved that you could play just about anything you want and do well. The mana is there, as well as the removal, and powerful creatures were printed in just about every color. My results from standard last season were horrible. I jumped around from Abzan to RW aggro to GR monsters and never really found a groove. In this next standard season, I plan on picking one color combination and sticking to it. My color of choice for the next 3 months?

I’ve put together a Mardu Aggro, Mardu Midrange, and Mardu control deck to play with. Mardu has access to powerful creatures like Stormbreath Dragon, planeswalkers like Sorin, Solemn Visitor, board wipes (Crux of Fate), and a bevy of other good spells. Before I share the decks with you, I’d like to promote the practice of sticking with one color combination. As Owen Turtenwald showed us with mono black devotion during Theros block, sticking with one deck and mastering it is the best way to get wins. Every time you switch to a new deck, you have to learn it all over again, which includes making a lot of mistakes. I believe the number of games you have to play with a deck before you can truly be comfortable with it is 50. If you’re always switching, you’re never going to hit that number.

By sticking with the same three colors, I can:

Now this is the first time I’ve decided to try to do something like this, so I don’t know if it will work or not, but anything is worth trying once. First off, I’ll be sharing my Mardu control deck with you.

I’m not that good at making control decks, but I think this is decent for my first try. The deck plays 6 board wipes, which includes the new black one, Crux of Fate. This is great if you’re playing against a lot of creature heavy decks such as Abzan aggro or GR monsters. It also plays all the planeswalkers in Mardu Colors: Elspeth Sun’s Champion, Sarkhan, the Dragonspeaker, and Sorin, Solemn Visitor. After a board wipe, these cards can single handedly take over a match. Aside from board wipes, you also have a lot of spot removal. Lightning Strike and Magma Jet take out early Goblin Rabblemasters and other fast creatures, while Crackling Doom gets around Fleecemane Lion’s hexproof or Rakshasa Deathdealer’s  regeneration.

Read the Bones give you much needed card advantage so you can draw the removal you need, and Murderous Cut gives you value removal for one mana later on in the game. I would have liked to play Hero’s Downfall instead, but I’m just not sure how the double black symbols would play in the deck. On top of the planeswalkers, the deck also plays some powerful dragons that are immune to Crux of Fate, and Ashcloud Phoenix which comes back to life no matter what.

As for the sideboard, I thought Archfiend of Depravity would be a great card to side in against token decks. Reducing their threats to 2 makes the battlefield much more manageable. Not sure if he’ll work out, but it seemed like a good idea. While I think the decklist is mostly solid, I do have some reservations. The curve on the deck is really high. I think it will be fine against midrange decks, but if I run into faster aggro decks, it could be a problem. I’m also not 100% sure on the mana. I think the deck is playable, but only 80% optimized at the moment. With some play testing, it could be pretty good. 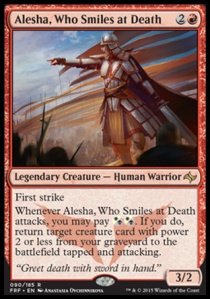 Alesha, Who Smiles at Death

My next deck is Aleshacrats. At it’s heart it’s a Mardu Warrior deck, using cards like Mardu Woe-Reaper (good against reanimator), Goblin Rabblemaster (he’s a warrior!), Bloodsoaked Champion, and Chief of the Edge to hit fast and hit hard. What gives this deck a little more reach than most is Alesha, Who Smiles at Death. You kill my Woe-Reaper? I don’t, I pay 2 mana and smile to bring him back to life. You kill my Rabblemaster? MWA HA HA! He’s baaaaaack. She lets you attack fearlessly into your opponent with little regard for her own life. Thanks to first strike, she can be kind of tough to deal with early on, and with all the burn this deck plays she can still manage to kill a big creature like Siege Rhino after a Magma Jet to its body.

Brutal Hordechief is another new addition to the deck, further letting you get some mileage out of your Bloodsoaked Champions and Goblin Rabblemaster tokens. On an empty board, Rabblemaster tokens will be doing a total of 2 damage each, and will also be gaining you life. This makes Aleshacrats a good deck against other aggro decks I think. While most people might think Tymaret, the Murder King could be replace by something better, I think he deserves a little loving. He’s got a lot of synergy with the Hordechief, as well as the Rabblemaster tokens. Play him on turn 2, Goblin Rabblemaster turn 3, Brutal Hordechief turn 4, and then start sacrificing those goblin tokens before they are blocked and killed. Each one will deal 3 damage and gain you 1 life in the process. I think it’s a nice angle of attack on top of an already aggressive deck that will be hard to deal with. The sideboard and removal package might need to be changed, but otherwise I think it’s good to go for some testing this weekend.

Butcher’s Feast, aka Mardu tokens has set me on the trail of Mardu. The deck plays a lot of powerful token makers with an impressive top end of Butcher of the Horde, Brutal Hordechief, and Kolaghan, the Storm’s Fury. This deck’s strategy is to put out those token makers early and to overwhelm your opponent’s removal. Seeker of the Way proved his worth in KTK standard, and with 15 spells I think he just barely makes it into this deck. His life gain is definitely needed against fast decks so you can stabilize and then take control of the board. Goblin Rabblemaster is our good old standby again, and instead of a heavier curve with Wingmate Roc, I decided to play Brimaz. He is a great blocker, survives most burn spells, and is a cute cute kitten king. ^_^. No, seriously, he’s still a good card even this late in his standard life. The vigilance thing works great alongside cards like Stoke the Flames.

At the pre-release, I was really impressed with Mardu Strike Leader’s ability. Dash is a great way to escape sorcery speed removal, and his tokens are some of the most powerful in standard at the moment. If he’s on an empty board, you’re basically getting 5 power for 3-4 mana (depending on if you paid his cost). Once you get all of these tokens out, if you’re not already beating your opponent convincingly, you can bring them to the brink of death with a Brutal Hordechief/Kolaghan double whammy. Don’t forget Sorin either. His +1 is a pain with 2-3 creatures, let alone 10. In the sideboard, I’m trying to cover all of my bases. We have Ajani’s Presence, Sarkhan the Dragonspeaker, and Elspeth, Sun’s Champion for control match ups, Utter End is great catch all removal against planeswalkers and Enchantments alike, Murderous Cut gives us a little more stopping power against Temur and GR Monsters, Erase hits Whip decks (especially BG ones) hard, and Scouring Sands seems like a must have against token mirror matches. I’m pretty happy with what the deck looks like right now, but that sideboard is definitely going to need some work as the metagame develops.

I took the RBW Tokens deck for a spin at the first FNM of the season and finished in second place with a respectable 2-1 record. I handled UR Ensoul Artifact Burn and GR monsters very well, creating an astounding number of creatures and even winning a game from Brutal Hordechief’s life loss. The only round I didn’t win was against Jeskai Tokens. I went 1-2, but definitely think the game is winnable. Mardu Strike Leader performed above and beyond for me as well, and I would recommend buying him cheap now while you can, cause this guy really seems like he could be the second coming of Goblin Rabblemaster.

To conclude, I’d like to once again voice my support of Mardu. Everything about these decks screams power. You have card disruption, removal spells, board wipes, big creatures, various modes of attack, and good mana. I think Mardu is going to be this season’s Abzan. Mardu has gotten some great spells to boost its power, and you’d be served well to follow my lead and join the horde. I’d also like to once more suggest trying out the one Clan strategy for a season with multiple builds. It will save you a lot of money and help you to focus on becoming a better player instead of constantly jumping around and switching decks. Better to be a master of one instead of master of none. Good luck and let me know how you did at your FNM this weekend. I’m very interested to hear what the metagames are like around your area. Hope to hear from you!

← Fate Reforged: Playing To Your Weaknesses – Artifacts, Lands, and Multicolor
Bang for your Buck: Investing in Cards for Fate Reforged – White →