Bang for your Buck: Investing in Cards for Fate Reforged – Blue and Black

Today I’ll be taking a look at the blue and black cards currently in standard and will talk about what I think will do well over the next few months. To start off, I think it’s important to talk about control. UB control got some great new cards in Ugin the Spirit Dragon and Crux of Fate. These cards alone will re-energize the struggling control decks out there, and I wouldn’t be surprised to see control spread to other colors such as BUG, Mardu, or even some Ugin based colorless/morph/Manifest decks. Both Treasure Cruise and Dig Through Time in lost some playability with the banning announcement, though  I don’t think it hurt the later too much. Dig should still be a solid card in standard and legacy. For black, we could possibly see a resurgence of two color devotion decks thanks to Crux of Fate. Having access to a sweeper like that means you could easily play a RB dragon deck with access to great removal spells, burn, as well as strong planeswalkers like Sarkhan and Chandra. Just how much of an effect the card will have on standard is yet to be seen. Let’s take a look at the cards I chose from last time and see how they performed.

I felt like blue was really hard to speculate on last time, but I think I did really well with my black choices. Luckily, most of those blue cards weren’t worth that much to begin with so if you did act on those picks you didn’t lose too much. Hopefully things will be a little bit easier this time around. UB control looks like a very real deck for this season, and I wouldn’t be surprised to see more Sultai decks (both Sidisi Whip and others) either. Let’s take a look at what good deals we can find in both black and blue today.

Dig Through Time seems like a good pick up at $7 right now. The card has proven itself to be powerful in just about any deck playing its colors. It’s key in Jeskai Ascendancy (in standard), and since it’s still legal in Legacy, I think most of the extra copies will start to be picked up by players in that format. Tons of people jumped on the Delver train, and it won’t be too hard for them to switch out those now useless Treasure Cruises for Dig. By March, I expect it to creep up to $8 or $9, especially if control puts up some good finishes.

While I’m not going to push him as hard as I did last time, I still think Master of Waves ($3) is a good pick up. Cloudform from Fate Reforged is just the card he needed to be playable again standard. If you team him up with Thassa, God of the Sea ($4.75) again, good things are bound to happen. 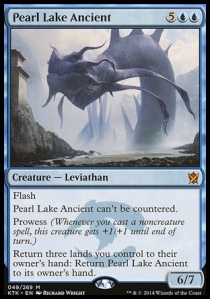 I expect Pearl Lake Ancient ($1) to start to pick up steam as control decks do over the next few months. UB control uses 2 on average, and being a Mythic Rare means there will be a lot less supply. We’ll still be opening Khans packs for the next 2 months, but after that we could see prices of about $3-4 like Aetherling (DGM) was during Ravnica/Theros standard. Get a few now and sell them this summer when they triple-quadruple in value.

Mono black aggro might not be a thing, but BW Warriors, Mardu Warriors/aggro, and BW midrange are just on the horizon and about to explode. The aggro decks are rather easy to build for the casual player, and a lot of new players also pick up the deck. Given those variables, I think Bloodsoaked Champion will inch up in value over the next few months from $1.75 to $2.50 or so. His ability works well with so many other effects that I wouldn’t be surprised to see him show up in some homebrews too. 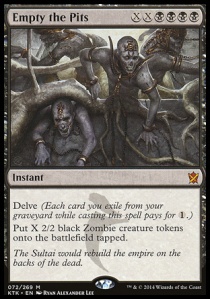 Another card that I think will benefit from UB control taking off is Empty the Pits. It’s a good pick up at $1 now, and wouldn’t be that bad in a BW midrange/black devotion deck either. Can’t go wrong with $4 for 4 Mythic Rares.

As for cards that have seen their time in the sun, I would start to silently start to unload any extra Doomwake Giants ($2) you have. Keep at least 3, but trade away the others if you can before they lose their value. Sidisi Whip should keep his value steady for the next few months, and maybe even take him a little higher. Make your move before spring. Hero’s Downfall ($8) is another card I would start to slowly start moving away from. Three color decks make it hard to play, and most of the time you can make due with 3 in your 2 color deck anyways.

I’m a little hesitant to push Nighthowler ($.50) now, but I really do think that Tasigur will make GB dredge playable again. Whip of Erebos ($5) has also hit its peak too I think. I plan on dropping down to 3 and cashing out on my extra ones. I don’t think it will go any higher than it’s current price.

Thoughtseize for $20 is still a steal. Like I said, it’s currently buylist for $25 or more in Japan, and you can’t find it in any store for less than $30. This isn’t going to change when Modern starts to pick up again. Many people have said Jund and Junk decks will be on the increase again after Treasure Cruise’s and Dig Through Time’s banning, so you can be sure those players will need their Thoughtseizes. It’s not going to happen now, but give it another 2 months and it will be out of reach. Trade for these as much as you can right now, and pick up any for under $20.

Next Time on Bang for your Buck

So what do you think? Were there any cards I missed that you think should have been in the list? The Pro Tour is coming up soon, and results from PPTQs all over the world will start pouring in so things could totally change in a matter of days. Keep your eyes peeled on any break our cards/combos and jump on them quickly if you can. Next time I’ll be covering the next 2 colors red and green, which will take us deep in Temur territory, as well as possible GR monster, and Green based devotion decks as well. The Star City Games Open in DC showed us that green is still a force to be reckoned with. I look forward to seeing which cards we can squeeze a little more juice out of before they are gone this fall.