Dragons of Tarkir: Playing to your Weaknesses – Green

My bad, my bad. I was supposed to have this posted by Friday but I ended up having more on my plate than I thought I was going to have last week. By this time, some of you have probably already played in a Pre-release (I’ve played in 2 at the time of this writing. I’ll be posting a report about the pre-releases after this weekend). I’ve used green TWICE during the pre-release already. During the midnight tournament I used GR, and on Saturday I used GW. I can’t say I’m disappointed in the color at all. It has a lot of raw power and some nifty synergies with both red and white. It’s two main abilities are bolster and formidable. What I learned during the pre-release was that these abilities can be really powerful in the right combination. Before checking out today’s article, please read through my Fate Reforged limited article.

Khans of Tarkir had tons of great morph creatures, and while there seem to be fewer in new set, there is still a lot of them and it makes this card totally worth it. This is probably the best green card you could have in this format outside of rare. With a handful of morph creatures like Misthoof Kirin or Ojutai Interceptor in a deck, you could do some real damage. I’d expect that you’ll be playing at least 4-5 megamorph/morph creatures in limited so it’s an auto include in sealed. I’d take this pretty high in draft due to this ability as well.

Speaking of other morphing cards, I really like the Shield Bearer. It’s great when you’re playing cards like Lightwalker (gives it flying) or Arashin Foremost (3/3 double strike) that benefit from the counter, and it works as a combat trick as well. I played it in my GW deck and was a key part of my strategy. This is a GW all star, but I would also consider it a role player in other green decks as well, especially aggressive ones. It fits well on your curve and is easy to cast.

When you have to deal with 3,4, and 5 toughness flyers you’re going to need a way to block them. Ainok Artillerist works great with the Bolster mechanic in GW, and would also be a grateful recipient of +1/+1 counter from the Shield-Bearers. Even if you aren’t playing with cards that put counters on creatures, I think a 4/1 body is still relevant in limited and I’d consider putting this in my 21st or 22nd card slot in sealed. It’s either going to hit hard or it’s going to trade with a large percentage of other creatures.

Servant of the Scale

Servant of the Scale is another card that has great synergy with creatures like Lightwalker. I usually don’t play one drops, but Servant of the Scale is a good speed bump that has an added bonus when it dies. Not an important pick but this is something you’ll probably want in your main deck, especially if you have a way to easily put more counters on it such as Gleam of Authority.

Very cool card in limited. Pacifisms, Runemarks, and Monuments will probably see quite a bit of play, and the Survivalist lets you play a creature and use a Naturalize effect. I’d also like to add that he’s great on your curve and very easy to morph. I think I’d take him pretty highly in draft.

The Megamorph ability is a little expensive, but making a 4/5 reach for 6 mana has its advantages. I personally think playing this at 4 mana is fine, especially if your opponent is playing a deck like UW or UB flyers, but if they have a few dragons in the air, I’d push for the +1/+1 counter. Solid roleplayer in green 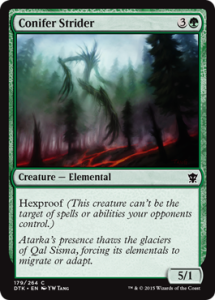 I played with Conifer Strider a lot at the pre-releases and it was pretty impressive. I had 2 in my GR box and it helped me turn on the Formidable mechanic pretty much by itself. It was able to put quite a lot of pressure on my opponents, especially if I had any combat tricks. It was also a great target for Bolster. If you had a few of those effects, it wouldn’t be too hard to see this as a 7/3 (I had a Temur Sabertooth and Sandcrafter Mage and went to town on my opponents at the Saturday release). Even if you’re not playing any combat tricks, it still trades with a lot of other creatures, and its hexproof is incredibly relevant in this format.

With only the Bear and the 5/1 guy in play, you can put a lot of pressure on your opponent. Dragon Scarred-Bear works great as both an attacker and defender once you have 8 power. The only things you have to watch out for are cards like Flatten. Definitely a mainboard creature in sealed, and I think I’d take this somewhat early in draft too. 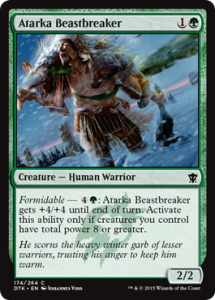 I opened the Beastbreaker at both of my pre-releases and it was able to do a lot of work for me. It give me something cheap to play early in the game, but as the turns dragged on I found him attacking a lot and either forcing my opponents to use their good removal on it when it became a 6/6, or blocking their own attackers and killing them. I’d recommend him for a Green deck, though he wouldn’t necessarily be a high pick.

At face value it looks like a vanilla 5/5 creature for 5 mana, and in that case it’s value is pretty high. What makes the Elk Herd a high pick in my books is the trample ability. If you’re playing at GW deck with lots of bolster bonuses or in GR with a bunch of glass cannons, trample suddenly becomes relevant. I don’t know how many times an opponent would chump block, only to find out that 2-3 points of damage still got through. If you’re playing GR I would take it pretty high in draft, otherwise it’s still a good beater in GW or other deck.

Love this card. While bear punching will go down in history at the most flavorful card from this set (heck, it even became a playmat!), Epic Confrontation is a welcome nod to its forefather. In some ways this is a better card though, as you know longer have to meet the Ferocious requirement in order to activate the +1/+2. This card should have no problems getting rid of even your enemy’s most powerful creatures in a green deck. Cards like Conifer Strider and Stampeding Elk Herd will be more than happy to clear the way of blockers then hit for a huge chunk of damage. I opened 2 in my GR box at the pre-release and they we absolute beatings for my opponents.

The last card I want to recommend today is Inspiring Call. It works best in a Bolster themed deck, but it’s also not too bad if you have a few megamorphs as well. Your opponent will not like you attacking with a Misthoof Kirin for 3 in the air or a Salt Road Ambushers on the ground. They’ll send in their blockers or use their removal, and when they do you spring Inspiring call on them to make sure your creatures survive the battle, while theirs die. Drawing a few cards is just icing on the cake. High pick in a Bolster themed deck, otherwise a decent card if you’re playing 4 or more Megamorphs.

Coming Up Next Time

We’re almost at the end here. Just a few artifacts, multicolor cards, and well . . . there aren’t really any lands to speak of so that will probably be it. I’ll try to post it tomorrow. As it isn’t going to be very long, it shouldn’t be a problem. I hope this article was able to help you out in your draft or sealed tournament. The format is still a very young one, but I think my suggestions will get you thinking and give you the advantage in some situations. If you have any other questions or comments. Please leave them down below.