Just when you think you’ve found them all, more card stores pop up that you had no idea existed. At least, that seems to be the case in Nagoya. Since I’ve moved here almost 4 years ago, more than 5 new stores catering to MTG and other trading card games have opened. Today I’ll be talking about 2 stores I haven’t covered before: Card Brunch in Motoyama, and Card Company in the Osu shopping area. 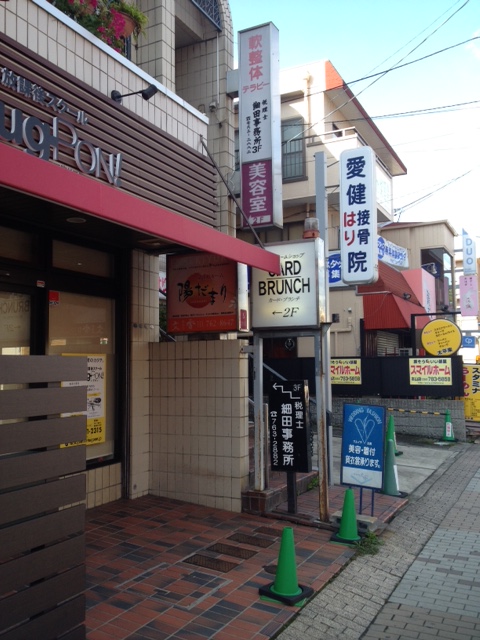 My first taste of Magic the Gathering was at Card Brunch in Kanayama when I first moved to Nagoya in 2011. It wasn’t until last year that I learned there was a second store in Nagoya. I managed to make it out there finally early this year to check it out. It’s located on the outskirts of town, so its not that easy to get to, but I think it’s worth checking out if you have the time.

The inside of the store is rather small, and the amount of cards they have in their showcase is rather limited, but don’t let that fool you. They have a fair amount of cards located in folders just below the showcase (which you can see in the picture above) and they have cards all the way back to the Lorwyn block. The rest of the store is mainly Japanese trading card games such as Yugi-Oh, but I think there is enough MTG stock to look through at the store to waste a good 30-45 minutes there.

The prices weren’t amazing, but if you’re willing to search you can find some good deals. Their EDH stuff is priced well, and so are their foils and promos. They have a lot more stock at this store than the Card Brunch near Kanayama which is a plus (the Kanayama store only goes back as far as Alara block), but they lack a decent sized playing area. Their play area can only hold about 18 players total, and most of the time it’s full of middle and high school kids after school. I asked about the MTG scene there and they said it was almost non-existent. I believe they have FNM which some college students come to, but for the most part you’d be hard pressed to find somebody to play with there.

The staff at the store doesn’t speak any English, but they were friendly enough and helped me out when I showed them the cards I wanted in the binders I looked through. Just as with any other MTG store you go to, you can sell your cards there as well as long as you have a photo ID like a foreigner card or passport (the buy prices have never been that good at this chain though). The store also use a point card system that is connected to the other store near Kanayama. Whenever you spend 500 yen at either of the shops, you get a stamp on your card. For ever 20 stamps you get, you receive a 500 yen discount on your next purchase. It’s not great, but it’s better than nothing.

It’s not the easiest to get to, but if you have an all day subway pass (which can be bought for 740 yen on weekdays, 600 on weekends), it’s not that bad. If you’re coming from Nagoya station, hop on the yellow Higashiyama subway line going towards Sakae. Motoyama is located 6 stops from Sakae and is BEFORE Higashiyama Coen station (which has a zoo I believe!). If you are coming from Ozone station on the Chuo Line, you can transfer to the purple Meijo subway line for Yagoto and get off at Motoyama station. It’s the 5th stop after Ozone I think. Yet another way to come is from Kanayama Station (and if you’ve been shopping in Osu and Kamimaezu, this is probably the way you’ll want to come). From Kanayama/Kamimaezu, take the purple Meijo subway line towards Sakae and get off at Sakae station. Once there, transfer to the yellow Higashiyama subway line and follow the same directions I stated above.

Now that we’ve made it to Motoyama, let’s walk to the store. Take exit 1 at Motoyama station and go up to street level. As you come out at the top of the stairs, take a left. You’ll see a supermarket on your left side (Max Value or Aeon I think), and not too far past that is a Kentucky Fried Chicken. Walk to the corner and turn left, staying on the left side of the road. You’ll see a parking lot on your left, and just past that is a small group of buildings. The sign for Card Brunch is a little hard to see, but if you use the picture above for reference you should be able to find it no problem.

Card Company joins an already crowded MTG market in the tourist favorite Osu Kannon shopping arcade. Amenity Dream, Yellow Submarine, Hobby Station, Advantage, and Big Magic are just a few of the shops in Nagoya and they can all be visited within a few minutes of one another. 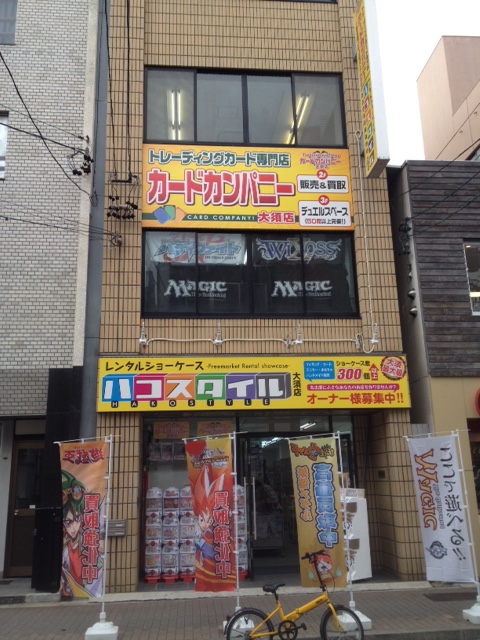 You know that the Trading Card industry and community is going strong when stores keeping opening up. Osu is known for its “alternative” selection of goods. There are manga, anime, music, and cosplay stores, and even a hookah bar in Osu. Card Company fits right in with all of the other locations and it’s not such a bad place. The store is made of up 3 floors. The first floor is a rental showcase area where people pay money to put various products such as anime characters, accessories, or rare goods in a small plastic case. If somebody wants to purchase it, all the have to do is go to the register and the employee will open it up for them.

The second floor is where the Magic (and other) cards are located. I believe that Card Company uses the CARD BOX system, which uses a central distributor somewhere in Japan to get cards at their store instead of depending on players to sell cards to them. I’m not sure how the system works exactly, as players can still sell cards to the store, but I’m guessing it helps by reducing the overhead needed to maintain a large number of cards and moves inventory in between stores to where demand is the greatest. Prinny Club in Kanyamya uses the same system, and I’ve visited other stores around Japan that use it too. 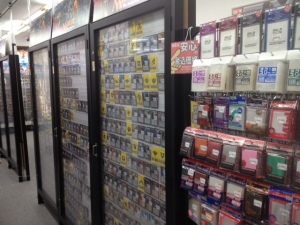 Being a new store, their currently selection is still in the process of being built up, but they have a decent amount of modern, EDH, and Legacy cards in their Magic area. They have 2 different cases, and also have a couple binders to look at which are located next to the standard case on the left side. Overall I’d say the prices are average. There’s nothing too expensive nor cheap (at least the last time I was there).

Since the store is new, it can only hold casual and non-sanctioned events until the store levels up. That shouldn’t stop you from popping in and doing some booster drafts with friends on the 3rd floor. They have space for 54 players and it’s free (like most of the places around town. Prinny Club is the exception). Amenity Dream and Hobby Station can be packed sometimes, and Yellow Submarine is sort of small, so if you’re looking for a place to play check it out. The store is bright and smells good (for now at least, lol), and is pretty well organized. 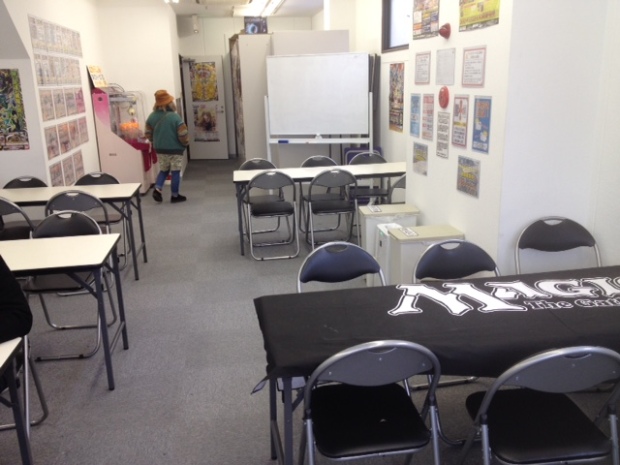 If you don’t know your way around the Osu shopping area, you could get lost finding Card Company. I think the easiest way to find it is to go to the Akamon Dori area, or the third major street. First off you need to get to Kamimaezu station. From Nagoya, take the yellow Higashiyama subway line to Sakae station, then transfer to the purple Meijo line going towards Kanayama station. Kamimaezu is the second stop after Sakae. If you’re coming from Kanayama, take the purple Meijo subway line towards Sakae 2 stops to Kamimaezu station.

Once you are at Kamimaezu station, go up to the street level from exit 9. Walk straight ahead and you’ll pass a Starbucks on your right. Walk past the parking garage and look for the 7/11 convenience store at the corner. Once you see the 7/11, take a left and you’ll be at Akamon Dori (and can see the large red gate). Akamon Dori is the road that has Hobby Station Osu, Yellow Submarine, and Advantage. Walk straight down this road until you reach a stop light (Maybe 2 blocks or so?). Take another left and you’ll be on one of the roads that cut through the shopping area. ON this road you’ll find a record store on your left, and if you keep going straight you’ll see Card Company on your right side. It was kind of tough for me to find the first time, but once I did it was a piece of cake. I believe there was also some kind of sweets/pancake cafe next to it called Can Do.

Card Brunch Motoyama has a lot of older cards which is a plus. Most stores only got back to the Alara block or so, and if they do have any older cards it’s usually just a few here and there. If you’re looking for more Shadowmoor and Lorwyn type cards, check it out. There were also some Futuresight and Time Spiral there as well. It’s not a place you should visit every week, but I think it’s worth one trip a month.

Card Company on the other hand, is another good resource in an otherwise packed market in Osu. It’s not the best, and not the worst, and you should check out the prices there when you’re out shopping just to make sure you’re finding the best deal. You never know what you’re going to find.

That will do it for today’s short article. I still have tons of pictures from my trip to Osaka more than a month ago, but that will have to wait as I’m putting other things together. This weekend is GP Kyoto, which I will be attending just for the experience, and not to play in the main event. I’m focused more on hanging out with friends and trading than I am in anything else. Super Sunday Standard should be fun too. Look for an article on my experiences there next week, and follow me on Twitter @yoschwenky to see pictures and listen to my coverage from around the floor. Thanks for reading and I hope to see you back in a few days!