Modern Masters 2015: Playing to Your Weaknesses – Artifacts and Colorless

GP Chiba is over, and sadly neither I nor any of my fellow Cardboard Samurai made it to day 2. If you’re looking for a tournament article, please be patient. One will be out shortly, but for now I want to finish my Modern Masters 2015 set review with Artifacts and colorless cards. I realize that it’s probably pointless at this point since the GP is over, but I can’t leave something unfinished. My heart might not be in it, but in the end it will be good practice for me. I’d also like to remind you that I’m trying out a point system next to each rating as well. Let me know what you think. 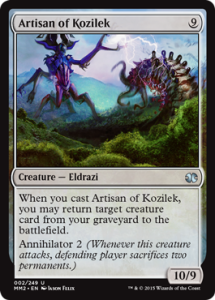 You don’t really have any choices of non-artifact colorless cards in this set, but with the ones you do you definitely want to play them. Artisan of Kozilek is insane in limited if you can get him out on the battlefield. 9 mana is a lot, but the format isn’t so fast as to not let you get that high. If you want Artisan at the top end of your deck so you can bring back an Aethersnipe or Pelakka Wurm to the battlefield, you better make sure that you have a plan on getting to that point. Green decks have Rampant Growth and Eldrazi drones like Nest Invader, artifacts have Alloy Myr and Sphere of the Suns, and if you’re playing him in blue with enough card draw or counter/tempo spells you should be fine. In draft I think he’s a possible first pick if your rare isn’t that good. The beauty of Eldrazi is that they fit in any deck. 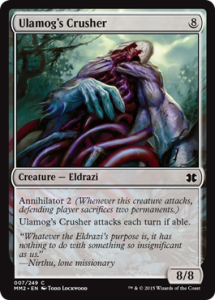 Ulamog’s Crusher main objective in life is to return everything to nothingness and to do it as soon as possible. He’s the smallest of the Eldrazi and easiest to cast (relatively speaking), but his drawback is having to attack each turn. Is that really such a bad thing? No matter what deck you play him in, if he hits the battlefield and is allowed to attack that creates a huge swing in tempo, especially if they end up throwing their entire team at him to block him. These guys will be plentiful at common, but don’t overload on them. If you have the ramp 2 is possible, but otherwise I think 1 is fine in limited. Good card in this format, but not high in draft. Great finisher. 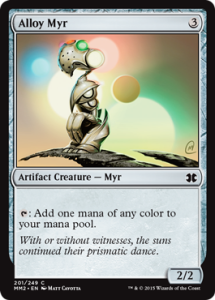 The artifact seeing the most play in this format will be Alloy Myr I think. It acts as mana ramp, mana fixing, and also fits well on your curve. It’s great if you’re trying to activate Sunburst in a 5 color Domain deck, or if you’re playing a 3 color deck to fix your mana. It’s also great in ramp strategies trying to get out cards like the Eldrazi. I think this will be an important part of many decks, but since it’s at common you don’t have to worry about drafting it highly. 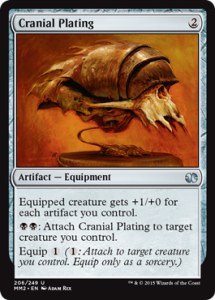 If you’re playing 5-6 artifacts in your deck, I think Cranial Plating is worth it. It keeps getting bigger and bigger the longer the game goes on. It’s great in a UW affinity or RW Equipment deck, but you should consider playing it in non-artifact decks as well. I would play this in any archetype if the number of artifacts was there. High pick in draft. 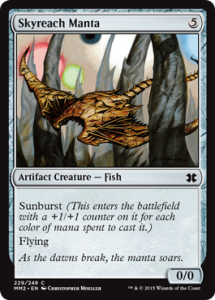 If you’re playing 3 colors this isn’t bad as a 3/3 flyer, but if you have the cards for a 5 mana domain deck, or are playing multiple bounce lands Skyreach Manta can easily become a 4/4 or 5/5 flyer. I ran into multiples of these during my first sealed tournament in a Domain deck on the release weekend, and they were hard to take out once they were put into play. Not to hard to get in draft, but I would expect somebody to be putting together a 4-5 color deck if it shows up once and doesn’t come back the second time. It would also work well in a Proliferate deck if you could keep putting more counters on it. 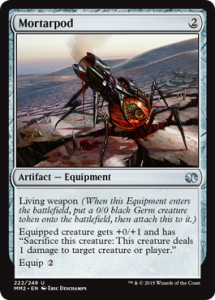 Next to Cranial Plating, Mortarpod is probably the 2nd best equipment in the set. It turns any creature into sacrifice effect, which means it be good in the GB sacrifice archetype as a sac outlet, but the any time damage would also work in a Bloodthirst deck to help activate the ability, and it can be really useful in a tokens deck if you’re finding it hard to push through any damage. Block, sacrifice, re-equip on something else. Good card around pick 6 in draft I think. Also worth considering for your sealed deck if you can do any of the archetypes I discussed. 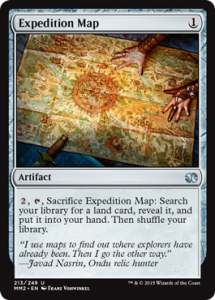 Grab a bounce land, an eldrazi land, or even get a basic land. It’s a staple for EDH decks and is pretty good in limited as well, especially if you’re playing with multiple bounce lands. Wayfarer’s Bauble is another similar choice at common, but it only gets basic land. This is a great card to draft early in packs 2 and 3, especially if you have your hands on some bounce lands already. Even if you have to put it in your hand, it’s still the best way to get the land you need from your deck. 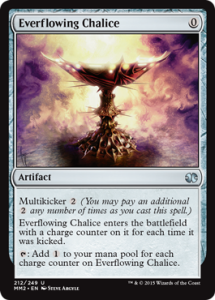 If ramp is your thing, Chalice is pretty good. Playing it on turn 4 with 2 counters gets you a possibly 7 mana on turn 5 to power out a big guy like Pelakka Wurm. It only gets better the later in the game you draw it, where as other ramp effects are limited. I also like Sphere of the Suns, but without a proliferate effect to keep those counter on there it can have a limited effect. I would take this over Sphere in draft, but if you’re running a lot of proliferate effects they can both be pretty good. Chalice is better in ramp strategies trying to push out fatties like Eldrazi, but Sphere is great for 3 color or more strategies like Domain. 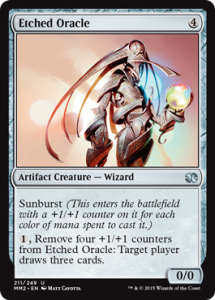 Just like with the Manta, Etched Oracle is better if you have cards like the bounce lands to make multiple colors. It’s also really good in proliferate decks that have access to cards like Thrummingbird which can keep refilling the counters on him. Even if you’re not playing 5 Color Domain, proliferating to 4 counters to draw 3 cards is pretty awesome (especially if you can do this multiple times). If you’re in 2 colors I wouldn’t play with him/draft him high, but once you hit that 3 color mark in your deck I think his value goes up considerably. Keep that in mind when you see him passed your way/in your pool. 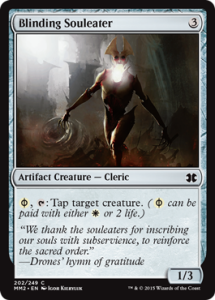 Besides being a good blocker, Blinding Souleater’s Phyrexian mana ability makes it playable in any deck. You’ll probably be playing it in UW affinity or RW Voltron which has access to white mana already, but if you’re facing down Eldrazi and want as many effects as you can get to deal with them, play the Souleater. Two life is a much better trade off than 2 permanents. 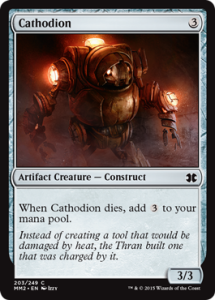 Good value for a 3/3 since it’s only 3 mana. Dying in battle would suck, but in a well developed GB sacrifice deck he can easily ramp you up to 7 mana on turn 4 if you have something like a Bloodthrone Vampire in play. Later pick in draft, but I see him being a role player. I think he’ll see play in many decks regardless of his ability though, just because he fits well on the curve and his toughness/power is solid.

Thanks for reading this. I realize this won’t get many reads outside of those players looking to do Modern Master 2015 drafts on MTGO and the occasional person drafting with friends at stores or with their own boxes, but that’s fine with me. I hope to see you again later this summer for Magic: Origins! Be sure to check back in a few days for my GP Chiba report!