It’s finally upon us. The LAST core set ever (supposedly), named Origins, will take us on a journey detailing the chronicles of planeswalkers we’ve come to know very well, and even love. Just how does the set stack up against past core sets? Well, having only given the Spoiler List a once over, I can at first glance say that it doesn’t disappoint. It looks like it will make some big splashes in standard, and also throw some cards into both Modern and Legacy. However, the reason we are here today is to cover how the Limited format will play out. Will it be a smash hit with players or end up being another painful slog like M13 was? At the moment, I’m leaning towards the former. Let’s start off with white today and see how the color comes together.

Renown is one of the new keywords from the set. Origins is all about the beginnings of various characters, and how they people ended up being famous (or infamous). The first card I’d like to talk about is Consul’s Lieutenant. This card is going to be great in limited. It starts off as a 2/1 first strike for 2 mana, but all it takes is one hit and it becomes renowned. The following turn your opponent not only has to deal with a 3/2 first striker, but it also turns into mini anthem of sorts for your other creatures when attacking. This makes deck strategies like W/x aggro very effective, and if you can throw evasion on it such as Stratus Walk, it will be very hard for your opponent to deal with. It’s a high pick in a White aggro deck, but I would probably take this rather high overall, possibly a top 5 pick in limited.

Sentinel of the Eternal Watch

Speaking of evasion, the Sentinel is basically Citadel Siege (FRF) on a creature. It’s a great blocker, doesn’t tap to attack, takes your opponent’s dangerous creature out of combat, and also swings for a decent amount of damage. I don’t think I’d be crazy first picking this in limited. It’s just a great all around creature and a great card to have in your 23 cards. Even if it’s 6 mana, it can make an impact on the board and quickly move the tempo of the game to your favor. 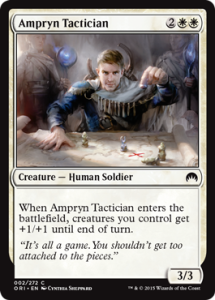 I’m really impressed by all the Enter the Battle (ETB) effects in this set. Even this 3/3 for 4 mana is made much better with a unique ETB effect. If you’re playing turn 1 Gideon into turn 2 Consul and a turn 3 Vryn Wingmare, this guy can really hurt the other player when it comes into play. Of course the draw back to this guy is that you need lots of creatures in play to make him really effective. I’d play a lot of 2 and 3 mana creatures, maybe some flyers in there as well for some evasion. His 3/3 body is also relevant the turn after as well. If you’re building a W/x flyer or aggro deck, you’ll definitely want to take him early in draft or use him in your sealed deck. Not an overly high pick, but not a card I think would come around a second time in draft.

Another solid creature card with a decent body and good ability. Great for curving out in a white soldier deck, but you probably don’t want more than 2 of them in your deck. Good 6th-7th pick in draft, playable in sealed. 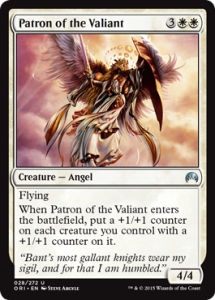 Patron of the Valiant

Renowned is avaiable in many colors and flavors, so Patron is good in just about any White deck variant you can come up with. It’s no Serra Angel, but it can be rather nasty in draft with the right mix of cards. I see this doing a lot of work/damage in white/x flying decks alongside cards such as Stalwart Aven, Blessed Spirits, or any other creatures with evasion in red or green. You can’t be a 4/4 flyer for 5 mana with an upside. This is a pretty aggressively costed card.

Not the best of the white renowned cards, but still decent. Lifelink is definitely a welcome ability, and if you can use tap down effects like Sentinel of the Eternal Watch’s or Grasp of the Hieromancer the renowned ability becomes much better. Nice, but not absolutely necessary if you open/draft a better card in the 4 mana slot. Play it for synergy, but don’t force it into a deck if there’s a better choice. 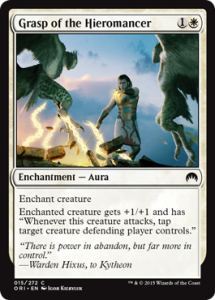 Grasp of the Hieromancer

As I mentioned above, Grasp of the Hieromancer is a great card to go along with all of these renowned abilities. It taps a dangerous blocker, gives your creature a power up, and forces your opponent to block unfavorably in some situations. Dream play: Turn 1 Kytheon (Gideon), turn 2 Grasp, tap their blocker and deal 3 damage. If you can draft 4 of these in a white aggro deck, you’d do pretty well I think. Great card for decks that want to be quick. Not as good if your mana curve is high. I still like it in draft though, and would probably take it highly, but not over a good creature or removal.

Most limited decks are playing 13-15 creatures, which makes Valor in Akros playable in my opinion, especially in a deck with a lot of flyers or evasion. Play some early attackers, Valor on turn 4, then you get a instant boost each turn after that whenever you play a creature. This card will be much better in an aggressive deck with lots of 2-4 casting cost creatures, as well as a deck with flyers and ways to refill your hand (either with card draw or a card like Evolutionary Leap that lets you get rid of your outclassed creatures for something better). There are some decks this will work in and others it will be subpar. If you can get some good synergy with it, play it. 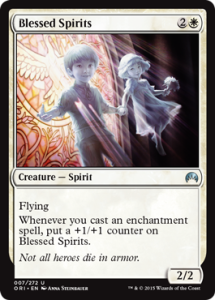 If you plan on playing some Valors or Grasps (or any other enchantments for that matter), I strongly recommend using Blessed Spirits in your deck. At its worse it’s a 2/2 flyer for 3 mana which isn’t horrible by any account. At its best, say with a Starfield of Nyx and a handful of enchantments such as Claustrophobia or Supression Bonds, it can be a great beater in the sky. If your removal is mainly based around enchantments I would definitely play this card, but even if you don’t you should strongly consider having this as one of the 23 cards in your deck. It’s a solid 6-7 choice in the first pack of draft.

White’s removal this time around is so-so. Suppression Bonds does a good impression of Arrest, but why the 4 mana? Was a 3 mana enchantment lock down effect really that strong? The only reason I can guess they moved this to 4 more was to make it a better card to use alongside Starfield of Nyx since it would become a 4/4 creature. Regardless of why it’s 4 mana, it’s still alright as far as removal goes, but not the best white has to offer. Not a high pick in draft, but there’s a 50/50 chance it won’t come back around if you pass it up in draft in packs 2 and 3. 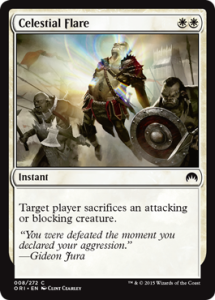 I missed Celestial Flare, especially in standard. Now white decks that AREN’T playing Mardu colors can get rid of cards like Stormbreath Dragon or a monstrous Fleecemane Lion. In limited it’s pretty good as well since the format is all around an aggressive one. I especially like it with trample creatures. When they go to block, you kill a creature and still put the damage through. It’s also a great way to get around an indestructible creature like Gideon/Kytheon. If you’re going to take ANY white removal, make it this one. It’s hard to take it early pack one in draft because of its double white symbols, but if white is one of your colors you definitely want to take it highly in packs 2 and 3. Good card in sealed too.

I’ll say it again; limited is an aggressive format with lots of attacking creatures. This makes Swift Reckoning a rather good card in Origins limited, but what makes it even better are cards like Grasp of the Hieromancer, Kytheon’s Irregulars, and Sentinel of the Eternal Watch. Even if your opponent wants to hold back that big creature, they don’t have a choice in this matter. You can tap it down with them, then take it out with Swift Reckoning after combat OR during combat if you have 2 other instants/sorceries in the graveyard. I think this is another card you want to take highly in draft, perhaps even higher than Celestial Flare because of its ability to kill any tapped creature. The more synergy you can acquire with this card, the better. High pick in draft, must play in sealed.

Coming Up Next Time

It looks like white’s going to be the color of aggressive creatures, tempo, and flyers this time around. In my opinion the color is balanced well and doesn’t necessarily have to serve in a supportive role. It’s possible to play a mostly white deck and still do well I think, especially if you have the tempo/removal cards to pull it off. If you agree or disagree though, I’d like to hear from you. Tuesday is going to be really busy for me, but blue should be out sometime on Wednesday I think. I just might be able to post black and red by Thursday as well before we get into the pre-release. I’ll do my best, but at the same time I hope to bring you well thought out evaluations that will help you to do well at your pre-releases/Limited tournaments! Good luck and see you next time!

One thought on “Magic Origins: Playing To Your Weaknesses – White”