The Japan Metagame Diaries: Zendikar Vs. The Eldrazi

With Battle for Zendikar standard winding down over the next few weeks before the release of Oath of the Gatewatch, I thought I’d take a look at how the metagame has transformed since Grand Prix Kobe over here in Japan and comment on how I think the new set will change things around. As most of you know, very few cards from BFZ managed to find their way into top tier decks during the past few months. Gideon, Ally of Zendikar was the most noticeable addition, and Ulamog, the Ceasless Hunger became the cornerstone of the Eldrazi Ramp decks, but other than that what we saw was a few cards here and there in sideboards, lots of commons/uncommons in decks like Rally the Ancestors decks, and some other cards in fringe playable decks.

In my last Metagame Diaries, I talked about the most recent update to my GR Eldrazi ramp deck and how it fared at GP Kobe. If you don’t want to bother reading the article, I can give you the long and short of it: It did well, but not great. I went 12-6 over 2 days, going 6-3 at the main event and 6-3 at Super Sunday. The deck was able to come back from the brink of death on multiple occasions to win a game, and sometimes it outright dominated match ups. So how would the changes hold up back home through a gauntlet of dozens of different strategies? That’s what I’d like to talk about today. Down below you can find the most up to date version of the deck.

As you can see, not much has changed and I believe that’s because the deck is solid. Even when the metagame shifted from midrange to control to aggro, the set up was strong enough to weather the storm of each kind. The most recent addition was the Deathmist Raptor. My friend Kal who plays UG Ramp swears by it because it makes your opponent play around it if they’re using decks like Abzan aggro, and it also creates a false target to protect your Rattleclaws from removal.

November 27th – November 29th – With GP Kobe the weekend before, there was obvious standard “fatigue” around Nagoya, so not many people were out that weekend. I went 2-1 at a small FNM of 8 players, beating Esper Dragons and a Naya Tokens deck, but losing to Dark Jeskai because I never ended up drawing any of my finishers. The following day I played at a 23 person event and went 3-1. WB aggro got me in the first match due to double mulligans both games and mana screw, but I won my next 3 matches in a row, taking down an Abzan Enchantress deck, a Bant Megamorph deck, and a UB Aristocrats deck. On the last day of the weekend, I played at a 26 person tournament and went 2-3. By far my worst outing, and mostly due to mulligans. I lost round 1 to Esper Tokens (my weakest match up), round 2 to Mardu Planeswalkers (mulligans again), and round 4 to Esper dragons (mana flood). I beat a Jeskai tempo and a GW Eldrazi ramp deck that day.

After week one, I was 7-5 with the deck, but had a 19-11 record with the deck if you included the GP results. Ugin performed great this first week, and Whisperwood Elemental also put a lot of pressure on slower opponents while helping me to hold back faster decks. The Winners of this week at those tournaments were Dark Jeskai, 4 Color Rally, and Esper Dragons.

December 4th – December 5th – I only had time for 2 tournaments this weekend, first at a 13 person FNM where I went 1-2 (lost to Atarka Red and Jeskai Ascendancy Tokens, beat GR Landfall Ramp), and then at a 21 person event where I finished 4-1. During the FNM I had so many mulligans I wanted to cry, but I did much better at the weekend tournament thanks for a change in mana creatures. In the second tournament, I beat 4 Color dragons (Ugin FTW), Atarka Red (Offshoot + Dragonlord Atarka), Esper Dragons (Whisperwood did lots of work), and BW Warriors (again, Ugin saves me). The only loss came against a blazing fast mono black warriors deck that is impossible to beat without early burn/board wipes.

During this week I experimented with Shaman of Forgotten Ways to combat aggro decks, and it did alright but ended up causing me trouble when I wanted to cast things such as Ugin, Hedrons, or Explosive Vegetation. Still, I fought back to a 5-3 record this weekend to keep my winning record alive at 24-14 with the deck (including the GP). Esper Dragons and Dark Jeskai were the winners at these two tournaments.

December 11th – December 12th – This period was another 2 tournament weekend but I really managed to hit my stride with the deck, going 3-0 at a 13 person FNM and 4-1 (again) at a 20 person tournament that Saturday. I destroyed GB Elf Company, Mardu Dragons, and UG Eldrazi at FNM for first place, and then the next day I took down Grixis Dragons, 4 Color Rally, Abzan blue, and Mardu Tokens before losing to the eventual winner (4 Color Tokens).

My Eldrazi ramp deck continued to bring both early pressure and an inevitable late game with Ulamog, Atarka, and Ugin. Tokens continues to be somewhat of a problem for me, especially with the opposing player’s resourcefulness of using Dark Petition to grab a Kolaghan in game 1 and 3 to win the game with just enough creatures on the table. This 7-1 record built on an already decent winning record to a good one. I was at 31-15 overall, and quickly showing people around town how strong ramp can be.

December 16th – December 25th – From the 16th onward, the amount of people playing standard decreased gradually from tournament to tournament, but I went anyways. Since Japan doesn’t celebrate Christmas like other countries do, many people were working that day (my wife include) and with my shopping done and family back home in the USA sleeping I decided to play during the start of my winter vacation.

I went 2-1 at a small event on the 16th (won by Esper Tokens),  2-2 at a 17 person standard tournament on the 19th (ran into Esper Tokens and mono black aggro in first two rounds with less than optimal hands. The winner was 5 Color Bring to Light with Monastery Mentor), 2-1 at a 26 person Sunday tournament on the 20th, and 2-0-1 at the next FNM on Christmas Day. With a 39-19-1 record stemming from the Grand Prix, I was pretty happy to be back on the winning side for once.

However, from that day onward I felt like the deck was getting kind of stale though so I decide to put it on the back burner and try out a new deck I had been thinking about. During the last part of the month the metagame in Nagoya had splintered into a number of strategies, namely aggro decks (Atarka Red, BW Warriors), some midrange decks (various Eldrazi ramp decks, Dark Temur Beatdown), and both of the Esper decks; Esper Tokens and Esper Dragons.

If nobody was going to be taking the game seriously for a while, I might as well try and have some fun too. 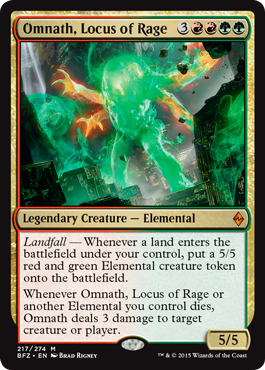 I actually posted a similar deck back in October, but I never really had a chance to test it out until just a few weeks ago. I said it before and I’ll say it again, I love the new Omnath. He’s one of those cards that you want to build around, but sadly nobody has found a home for him yet. He’s a huge threat, especially in a ramp deck such as this one that grabs land after land to activate landfall abilities, but he’s also a huge target. You will rarely find an opponent that will let you untap the following turn with him in play (and those that do let you are already dead), so what’s a player to do?

Well, first I had to make some changes. The previous deck used Sword of the Animist but without a lot of fast, aggressive creatures it seemed pointless. I also originally had Crumble to Dust. The card was cute, especially with Oblivion Sower in the deck, but more often than not it was a dead card in my hand. I moved it into the sideboard for ramp and control match ups, and it’s been pretty good there. Due to the popularity of Tasigur, Murderous Cut, and other delve cards Sower is still pretty effective. Even when he’s not comboing off with Omnath or Grove Rumbler, he’s still making a big impact on the board.

Another addition to the deck was Dragonmaster Oucast. While it doesn’t have the Elemental Synergy of the other cards, it does give you an early drop and an ability that can become a dangerous threat as soon as turn 5. Flying creatures have always been one of ramp decks’ weaknesses, and until we get Kozilek’s Return in standard, Dragonmaster is a good play. I also think that Zendikar Incarnate could be good in this deck, but without trample it will be hard to get a lot of value out of him. After some testing I can say that this deck has some potential, but at the moment it’s missing some key cards that would make it downright explosive. I think its time might be just around the corner though.

Double Landfall Activation every turn for cards like Undergrowth Champion and Grove Rumbler, but more importantly Mina and Denn finally give ramp decks what they’ve been needing: evasion. Trample isn’t the best form, but disallowing the use of chump blockers puts your opponent on a much faster clock.

These two elementals are also on my list of possible playables come February. I think of these guys are mini-Omnaths. They don’t give you a permanent 5/5 body on the battlefield, but they put more pressure on opponents than Nissa or Zendikar Incarnate do, but with two landfall activations+ per turn, you can suddenly go from 1 to 3 creatures (more if you’re playing with Sword of the Animist), and suddenly have 10+ power on the board. Add in Whisperwood Elemental and Grove Rumbler and you have a potent mixture ready to blow up at any time. They deck might still struggle against Eldrazi Ramp decks, but unchecked the deck should be able to run away with some games and combo out through multiple land drops and ramp cards.

The number of ramp players has been steadily increasing over the past few weeks here in Nagoya, and I believe the number will only increase after Oath of the Gatewatch. There are lots of playable Eldrazi in the set, and the power level of GR Elementals is nothing to be scoffed at. Many weaknesses/holes in Ramp’s strategies such as flyers (World Breaker), aggro (Kozilek’s Return), and control (Reality Smasher, Kozilek, the Great Distortion) have been plugged and I expect the decks’ consistency to greatly improve. I also wouldn’t be surprised to see ramp decks forego all colors to do straight colorless ramp with Hedron Archive, Hedron Crawler, and Seer’s Lantern doing all the heavy lifting instead of sorceries. I also think that From Beyond will see a lot more play as the number of usable Eldrazi in constructed will skyrocket. The same will be said of Sanctum of Ugin and Shrine of the Forsaken Gods.

I don’t think that ramp has been this well positioned in standard since Dragons of Tarkir used See the Unwritten to put Surrak the Hunt Caller and Atarka into play the same turn, and I think that deck will pale in comparison to it’s Eldrazi successors. Words to live by this next standard season: Go Big or go home.

← A Call to Arms: The Rise of EDH in Japan
Oath of the Gatewatch: Playing to Your Weaknesses – White →

One thought on “The Japan Metagame Diaries: Zendikar Vs. The Eldrazi”