Oath of the Gatewatch: Playing To Your Weaknesses – Red

I don’t know about you, but red cards in Battle for Zendikar were kind of a let down. There were some cards that played good support roles, but nothing really stood out or was able to take over a game. Hopefully Oath will be able to shore up the shortcomings of red from the previous set, but I still think the color will be trailing in playables compared to Black, blue, and green. Let’s take a look and see what it has to offer us this time. 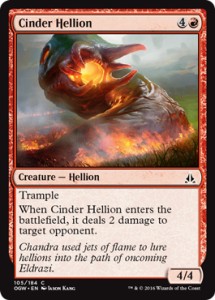 My favorite creature at uncommon and common in red is hands down Cinder Hellion. Coming in at a beefy 4/4, the hellion will be able to give as well as it can take. For the longest time it felt like Wizards was continuously deflating the power level of cards, but I feel like power is creeping up again. This is a common yet it has trample, costs only 5 mana, and also burns an opponent for 2 whenever it enter’s the battlefield. That’s a nice little ability if you have a card like Eldrazi Displacer in play. I also really like this card with all of those black creatures that drain an opponent’s life. BW control with a splash of red is doable, and if I was focusing on holding off the other player while chipping away at their life total, Cinder Hellion would be right there helping me. Good in both draft and sealed.

I talked about this card a little bit in my metagame diary thread a few days back and how I think it will be great in GR Elemental ramp, but it will be an absolute terror in limited. Once he’s in play, you’ll be able to put constant pressure on your opponent, with all the extra lands you have in play. He’ll fit in absolutely any red deck (Allies, Eldrazi, etc), and you’d be crazy to pass this card to the person next to you. He’ll roll over Ally strategies and cause a lot of headaches for decks with limited removal spells. Where he’ll really shine is in GR Landfall decks, and if you open a card like Mina and Denn, Windborn he will probably be able to end your opponent by himself. Limited all-star, and worth splashing. Grab him as soon as you see him.

The problem with RW and Mardu allies before was card draw. You could put together some potent lines of attack if you drew the right ally for your cause, but more often than not you ended up running out of threats. Between Akoum Flameseeker and Malakir Soothsayer in play, you’ll have plenty of ways to get card advantage. However, just like the Soothsayer, if you’re not playing many allies to be able to activate the ability, it’s not really worth it. Outside of ally decks, I’d say it would just barely slide into the 23rd card slot. Not something you have to draft right away, but don’t overlook its possibly synergy with your deck. A 3/2 body is also decent.

Another decent attacker for red in the Ally strategy. You can play him as soon as turn 3 if you play a one drop ally creature first, but even if you’re playing him on turn 4 a 3/2 body with menace is decent. You should be able to trade with two creatures before he dies. I think the menace ability makes him much more relevant outside of ally decks however, so if you had to choose between him and Akoum Flameseeker in a non-ally deck, I’d go with the Freerunner. 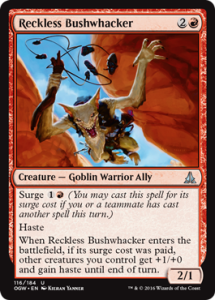 A slightly worse Goblin Bushwhacker because you have to play a spell before him to get the bonus (with the kicker the original was only 2 mana, this is 3), but in an Ally themed deck built around swarming an opponent it can be really good. If you have Retreat to Emeria and have been putting Kor tokens into play for a few turns, Reckless Bushwhacker acts as a pretty good semi-anthem effect. You probably want to play him around turn 5-6 so you can swing in with him and another creature before hand (hopefully with 2 Rally triggers). Great in allies, but also playable in other red based decks like UR Eldrazi and GR Landfall. Worth having in your deck. 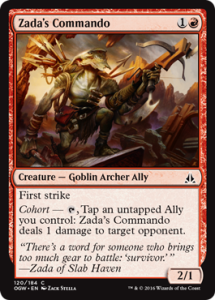 I came close to keeping Zada’s Commando out of this list until I saw he had first strike on top of a Cohort ability. It’s too bad it doesn’t ping creatures as well, but it gives Ally decks that lose steam later on in a match some reach which the strategy sorely needed. Certain 2 and 3 drop creatures can have quite an impact in this format, and I think Zada’s Commando can give you the edge you need to race bigger decks that will overpower you later in the game.

Unless you’re playing ramp, I don’t really see a downside to this card. It’s great in GR landfall decks, giving you a trigger if you didn’t play a land that turn, and it also gets rid of just about any card in your way. The restriction is much easier on you than burn spells in past sets (sacrificing a creature or needing cards in the graveyard), and should be highly sought after removal for red decks. If you see it in draft, it will be a good sign that red is open. I’m also happy that it targets planeswalkers as well. Think of it as a better Roast (DTK).

*sigh* Another card that DOES NOT hit both players and creatures. I mean, I’m fine using this in limited as decent removal, but I wish that WoTC would start printing playable burn spells again. It’s inferior to Devour in Flames, but in the right deck (such as allies due to all the cheap creatures) it can be pretty effective. If the removal in your other colors aren’t great, it should be able to get the job done that you need it to do. It kills quite a lot of creatures, including flyers. It just sucks that sometimes it’s 2 mana and sometimes it’s 5.

Was Shock really that overpowered at 1 mana? And why didn’t they just reprint Ghostfire? Meh. I guess this will be pretty good against ally and other aggro based decks, but most of the time it simply won’t be enough to get rid of your opponent’s creatures. Barely playable. The only good thing about it is being able to hit your opponent as well.

The Eldrazi in red kind of suck at the common and uncommon level. Even in a UR Eldrazi deck, I think this there are a lot more blue cards I’d rather play instead of Maw of Kozilek. It’s a nice trick to be able to turn it into a 6/1 glass cannon, but Havoc Sower and Kozilek’s Shrieker in black simply outclass it. I’d consider it as one of the last cards you’d put into your limited deck if you’re short on creatures. Nothing that great about it.

The removal is better this time around, and both Allies and Landfall strategies got some good cards to strengthen their game plans, however red is still stuck on the role of supporting other colors. Black and red gives you access to some great removal, red and white gives you access to aggressive creatures and tons of ally triggers, and green and red puts you into a position that can explode out of nowhere. Don’t be afraid to splash for some red cards, but if red ends up being your main color prepare yourself for some major shortcomings.

Thanks for reading and be sure to check out green before the pre-release! If you have any more comments on today’s article please leave them down below.

4 thoughts on “Oath of the Gatewatch: Playing To Your Weaknesses – Red”