Bang for your Buck: Investing in Cards for Eldritch Moon – Red, Green, and Artifact

With a weekend full of EMN/SOI sealed coming up at multiple GPs, we probably won’t see too many big changes in standard, but I believe we might start to see some chinks in Collected Company’s armor at SCG Baltimore. What I aim to do today is to continue to go over the undervalued and underrated cards currently in standard and talk about those that I think are poised to break out once Collected Company decks are brought to heel and the metagame opens up once more. Let’s take a look first at what I talked about last time.

There has been almost no incentive to play big green decks or red based decks due to a lack of game changing creatures and burn spells, but I think that will change a bit in Eldritch Moon standard thanks to cards like Eldritch Evolution and a bevy of new burn spells like Incendiary Flow. While I don’t think they’ll reach Tier 1 status, Eldritch Moon will bring a few decks back into competitive Magic. 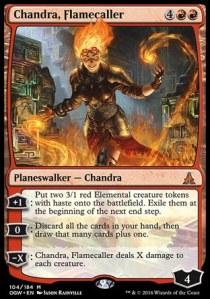 I feel like Chandra is finally back to being affordable now that she’s hit $12.50. This is a far cry from her $30+ price tag during Gatewatch Standard when GR Eldrazi ramp was king, but I still see value in her. Chandra has about another year of standard left in her, and once Collected Company rotates this fall I think she’ll go back up in price again. We probably won’t see GR Eldrazi ramp reach Tier 1 again, but I think there will be other decks once Kaladesh hits. $20-$25 is a definite possiblity if she becomes a 3-4 of in decks again.

I know I’ve been wrong about this card for the last seasons, but come on, $2? You probably already have a playset but if you don’t, or if this gets even closer to bulk status during EMN standard, grab a second playset. It’s such a good card but has been cursed by the Collected Company metagame. We probably won’t see any movement until Kaladesh this fall, but I’m certain the price will go up. This is a $5+ card in certain metagames.

We’ve only really seen Kozilek’s Return in GR Eldrazi and in some sideboards of control decks such as UR/GR Goggles and Grixis, but after facing off against a VERY good Temur Eldrazi Tempo deck playing Elder Deep-Fiend I think it might have found another home. The deck could easily pitch this card and then flash in Deep-Fiend to activate it, wiping the board, tapping down lands or other problematic permanents, and then swing for 5 the following turn. The deck could be Tier 1.5 once tuned, so if you don’t have any Kozilek’s Return yet, grab your playset at $5.75. I don’t know if we’ll see north of $10, but around $10 each is a possiblity.

I kind of like Sin Prodder ($1) still, even though it hasn’t seen any play. It’s a good effect and a decent creature that simply hasn’t found a deck yet. Maybe it would be good in Jund reanimator? 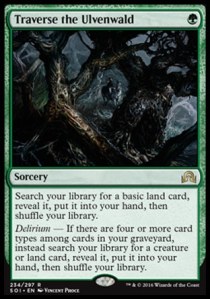 GB Delirium decks seem to be on the upswing and Traverse the Ulvenwald is a 4 of in those decks. It’s $2 now but if the deck takes off that price could easily double. Grim Flayer and Ishkanah really helped to push this deck strategy to the forefront.

There are a few other cards in green that I think will hold their value over the next standard season, and those cards are: Tireless Tracker ($5), Sylvan Advocate ($5.75), World Breaker ($5), and Cryptolith Rites ($2.50). I don’t really see them going up or going down, so if you need them, buy them, and if you have them hold onto them for the time being. Advocate could inch up a little bit if GB Delirium and the old version of Bant Company get popular, but I’m not holding my breath.

Deathcap Cultivator is only $.50 now, but I think there will be some ramp decks in the future (especially with Nissa’s Pilgrimage and Explosive Vegetation rotating this fall) that want access to it. Grab a playset now for $2. If it sees any play in the future, it will be a 4-of which will push it’s value up a few dollars.

Brain in a Jar is such a fun fringe card that I think it will continue have people brewing with it over the next few standard cycles. Having a playset for $4 (or $1 each) doesn’t seem like that high of a risk and could have a high pay off if Brain in the Jar decks become a hit at FNMs and weekend tournaments. It will never go over $3, but I could see it hit $2-$2.50 the further we get away from SOI.

The majority of movers this season is probably going to come from red. There are a lot of good green cards in standard currently but most of them (such as Collected Company) will be rotating in September. I could be wrong though. If you think there are some other cards that are ready to pop during Eldritch Moon standard or that you think could possibly shoot up right before Kaladesh is released, let me know in the comment section down below!

My last article about Multicolor, Colorless cards (Eldrazi), and Land cards will be coming next week sometime, and I think there will be a few good cards to talk about. Be sure to check back in a few days to read it!