Bang For Your Buck: Investing in Cards for Aether Revolt – Multicolor, Land, and Colorless

Thanks for being patient. While it’s technically ‘cheating’ to be writing this as the Pro Tour is going on in Dublin since I can see what cards are being played in the pros decks, doing it on this weekend also will give me a better feel for the direction of the metagame. Even if a deck does well and those cards spike, other decks could have a profound effect on standard and lead to a more diverse metagame with more options for investment. Before starting, let’s take a quick look at the cards I picked during Kaladesh to take off.

I didn’t do that bad, but I really underestimated Grim Flayer’s power level. The bannings also threw me for a loop as well as my  projections. The distinction in card power levels should be a little bit easier to see in this format with Aether Revolts increase in strength, but a few cards might still slip through the cracks and catch us totally off guard. Let’s take a look at how the rest of the cards in standard will be affected by the new set. 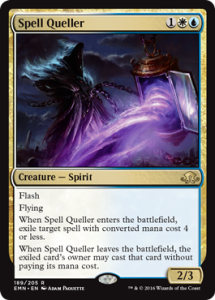 I’m not super high on Spell Queller ($7), but I can’t really think of anything other multicolor card this time that hasn’t already spiked or already had its time in the sun. UW Flash has fallen off the map, however Spell Queller still has a place in Frontier. I think you should look for it to start going down, and I would recommend getting your playset once they hit the $4-5 range. Should be a great card in Frontier in the future, especially in Rally decks.

I really like Ayli, Eternal Pilgrim ($1) in this metagame. Besides blocking and killing anything on the ground that’s not indestructible, she seems like a great Revolt Enabler. If you’re looking to take advantage of multiple Revolt triggers, you’re not going to get a better card than Ayli (especially if you have lots of tokens to sacrifice).

I also think that Depala, Pilot Exemplar is undervalued at $.75 right now. Some form of RW vehicles is going to still be viable, even if Smuggler’s Copter is gone. Heart of Kiran and Aether Harvester are 2 great additions to the deck. Now’s a good time to grab a few extra. All she needs is a few good finishes to triple up in value.

Lots of the SOI and BFZ lands started to inch up over the last few weeks, so I wouldn’t recommend picking them up unless you really need them. They should go back down closer to rotation in case you need them for Frontier. That being said, if you have any extras I’d start unloading them over the next few months when they hit their peaks. 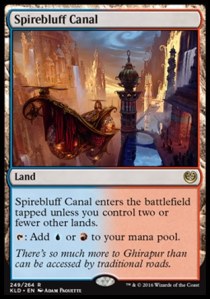 You might think Spirebluff Canal is pricey at $8, but it still has some upwards room I think. It sees play in Jeskai control, Saheeli Combo, and vehicle decks, and if the 1200 yen buy list prices ($10.50) around town here in Japan are any indicator, I think you’ll want to get them now if you plan to use them. They’re going to go up more, and it will be months before it’s back down to $6-7.

Sanctum of Ugin ($1.50) seems like a good target for this summer. Besides seeing play in the various colossus decks out there, I think it still has a spot in the Frontier format. It could see a slight uptick this summer if Colossus becomes popular with the casual crowd, but could also go up if Elder Deep-Fiend decks make a comeback. It’s a long shot, but a good long term investment as well.

I think Decimator of the Provinces will be broken some day, and I’m standing by my recommendation that it will be a good long term investment. It’s a mythic rare and Eldrazi. At $1.75 there’s a lot of potential upside.

I’m also wondering if Endless One ($.75) could potentially see some play in Winding Constrictor decks as another big beater. It doesn’t have any special abilities, but can still be used as a mana source with Rishkar in play. Maybe if Constrictor decks move into 3-4 colors?

There’s nothing too exciting too look for in the final 3 card categories. We might see some show up in variants of popular decks, or in sideboards, but overall I would recommend keeping your eyes on these cards. When opportunity knocks, be sure to open the door!

The Pro Tour is still going on as I finish this, but it seems like we won’t see too many cards spike. The same cards that were selling out week one are still viable in the same decks that many of us are seeing at the tournament. Some cards like Chandra and Avacyn might see a drop in prices, but most of the other spiked cards like Ballista and the Gearhulks should hold those values for a while.

Well that’s going to do it for this season of Bang for your Buck. If you have any other suggestions regarding how Aether Revolt will affect prices in the new standard, I’d like to hear what you think down below. Thanks for reading and be sure to check back in a few more days for a new article!