Bang for your Buck: Investing in Cards for Hour of Devastation – Multicolor, Colorless, Land

The metagame seems to be settling, and while decks like mono red and zombies continue to put up good numbers, this is where control decks start to shine. Now they can focus heavily on adjusting their strategies to combat these aggro decks and push back. We’ve also seen more people using life gain decks such as GW Cats and mono white life gain in some casual capacities, and GB Constrictor isn’t down for the count either. Sadly, this will be the last time I cover colorless cards since they’ll be rotating out with the next set at the end of September. Good bye my Eldrazi friends, but not forever. They’ll be back in Modern and Frontier, so now’s the time to take a good luck at their potential in formats after rotation.

There weren’t too many targets last time, but I think I did alright with what we had. Ulamog and Flayer were the big wins if you sold them. It seems like we’re hitting bottom on a lot of cards this summer season, and with some cards rotating now’s the time to pick up a few deals.

I believe that Nissa, Steward of Elements ($6.75) will eventually see play, but not during this standard season. Her price has a little bit further to drop, but not much. Grab a play set at $5-6 if you can, cause I have a feeling she’ll come into her own deck after rotation.

Grim Flayer might drop down to about $10 around rotation time from $12.50, but I don’t think he’ll go much lower than that. He has applications in both Frontier and other eternal formats, so I think he’s a good long term speculation. Keep an eye on that price of his though, and grab a playset of Flayers when you feel comfortable with the price.

This is probably the first time Nahiri has been anywhere close to affordable ($12), and soon she’ll be rotating which means we might see one more dip to single digits, but I believe Nahiri has some uses in Modern and Frontier in the future, so I’m going to hold on to my set. Give her a few modern seasons and I think she’ll be back up to the $20 range. Her ultimate is so good and there are plenty of targets in the older sets. 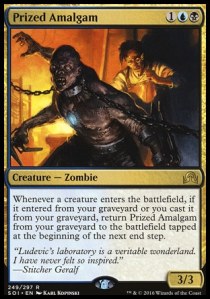 Besides being in the fun standard dredge deck, I think Prized Amalgam ($2) has a future in Modern or Frontier. It saw some play in dredge decks, and as graveyard strategies evolve I think it could make a comeback. It will probably hit about $1 at rotation, but I think this is a good long term investment.

Hapatra, Vizier of Poisons ($1) seems like a fun card that could eventually see some play, but I don’t think she’ll get any play until after rotation. I kinda like her as a long term speculations, especially since Vraska will be back as a GB planeswalker in Ixalan meaning some kind of synergy might exist and finally give Hapatra the critical mass of -1/-1 counters she needs.

I can’t really recommend any of the lands currently in standard for long term speculations. I think most of the BFZ and SOI block land cards still have some ways to drop in value, but eventually they could be pretty good in formats like Frontier. I don’t think there will be much to use in Modern or Legacy, but if Frontier takes off you’ll definitely want to make sure you have a playset of the battle lands, shadow lands, and the man lands for starters. If Frontier starts to take off after rotation, consider grabbing your “new duals” when they are about $1-2 each.

Emrakul, The Promised End ($8.25) is not banned in Frontier, and it also seems like a fun card to have in eternal formats from time to time if you can’t afford the ROE version, but I don’t think it’s hit bottom yet. I’m looking at a $6-7 buy in at rotation, but that could be sped up if Frontier starts to take off at the end of this standard season due to rotation. 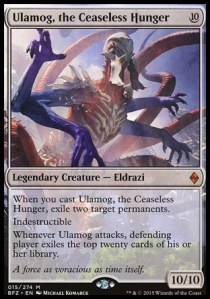 Out of all the Eldrazi from Battle for Zendikar block, I think Ulamog has the brightest future. This blind eternity has shown itself to be a powerhouse in standard which means it will be great in Frontier as well, but it’s been showing up in some modern and legacy decks as well, and with the recent popularity of Eldrazi tron decks, I think it’s safe to say there will be a place for it in the future. It will probably drop a little more from $13.50 after rotation, but I don’t think it will go into the single digits. If you need a play set get them when Ulamog hits $10-11. Another good long term investment.

There are a lot of Eldrazi cards that have a lot of potential for Frontier, but not so many that can break into modern without Eye of Ugin available to quicken them out. One such card is Elder Deep-Fiend ($1.50) which saw a lot of play in Emerge decks in previous standard seasons, but has since become a bulk rare. I also like the power level of Distended Mindbender ($.50), but I’m not sure where it would fit in Frontier. Perhaps some kind of Delve/Emerge build that lets you play an early Tasigur/Hooting Mandrills then Emerge a Decimator of the Provinces into play early in the game?

As I stated above, with colorless cards rotating at the end of this season, this is the last 3 article series I’ll be doing for Bang for your Buck. Future articles will be just to 2 parts, which should make for a lot better reading. I’ll be doing a special rotation series of Bang for your Buck next time in September/October, so be sure to check back then to see what’s good to invest in for the long run.

I plan on writing about Frontier again very soon to talk about the impact of Hour of Devastation in the format, but before then I will probably post a standard metagame update about what’s been happening in Nagoya recently. The format seems to be in a good place, but sadly not everybody is flocking back to standard and the tournament numbers simply aren’t there in Nagoya. Hopefully this changes soon.

← Bang for your Buck: Investing in Cards for Hour of Devastation – Red, Green, and Artifact
The Japan Metagame Diaries: Cat-atonic →