Ixalan: Playing to Your Weaknesses – Black

Ladies and gentlemen, I think we have found one of our main colors. I said previously that I think blue is mostly a support color, and that white is lacking overall synergy to be able to direct a general strategy, but I can truthfully say that black is very strong by itself and only needs limited support from another color to be effective. Black adds the rest of the vampires and and a large number of pirates to the limited mix, and it doesn’t disappoint. 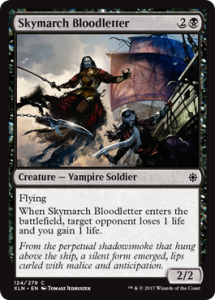 Let’s start off with our bloodthirsty legions of the night. White gave us a large number of quick, aggressive vampires, but black helps those strategies to fill out their upper end. Skymarch Bloodletter is slightly better than a Wind Drake, but as I stated in my white article, having cards that contribute to your life total will help your BW vampire deck to reach its full potential. Without various sources to keep your life points flowing, they will drink you dry.

Anointed Deacon can be good by himself, becoming a 5/3 for 5 mana when it attacks, but where he’ll shine is giving less fortunate vampires like the Bloodletter or Skymarcher an added boost in power to hit your opponent in the air. I’d take him highly in a BW Vampire limited build, but the Deacon would also be fine if you were lacking good finishers. He’s one of the few vampires that can probably go toe to toe with a large number of the dinosaurs when attacking.

Deathless Ancient is probably the strongest of the non-rare vampires in black, being able to return from death again and again as long as you have some vampires to complete the “ceremony”. He can kill an Air Elemental and come back for more, and that’s no easy task. Evasion, power, and resurrection is a power combination. I’d draft him highly. Not bad as a build around card if you grab some other powerful rare vampires like Mavren Fein or Bishop of Rebirth to keep you in the “red” so to speak.

Queen’s Agent, on the other hand, is on the borderline of playability. At 6 mana, it’s quite the investment for a 3/3 life link creature that may or may not become a 4/4. Where I like it the most is when you can scry. If you’re playing blue and can use something like Perilous Voyage, he becomes a lot more consistent, but there’s still a possibility of him whiffing when he explores. Sticking in a vampire-centric deck at least lets you use various effects on him to pump up his power like Duskborne Skymarcher’s ability or the Deacon’s combat effect.

Two other cards that would go well in a vampire’s deck are Blight Keeper and Dark Nourishment. Both have life draining effects which keep your troop’s thirst under check, and let you use your life total a little less sparingly. Dark Nourishment is a solid piece of removal and kills most creatures with a CMC of 4 or less and is instant speed, which is a plus. Blight Keeper is a good first turn play and can sneak in some damage for you, and with a decent amount of treasure tokens to help you ramp I’d expect you to be able to use it’s 8 mana ability consistently as well. Both are limited roleplayers in a BW vampire deck, but should fare well in any other black deck you build too. 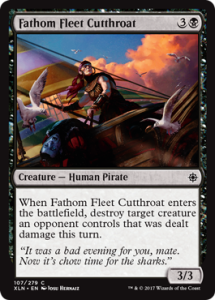 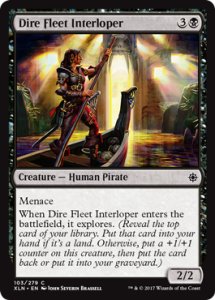 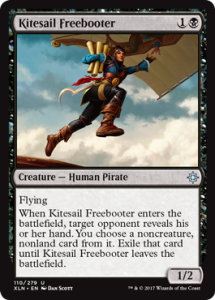 Pirates really come into their own in black. There are quite a few that are playable in Ixalan limited, so I’ve broken them into two different types. The first ones are those that have ETB effects that can affect an opponent or their creatures. Kitesail Freebooter, for example, probably won’t hit your opponent’s removal, artifact, or enchantment all of the time, but getting information that early in the game from your opponent’s hand and having a flyer to boot can really allow you to press your advantage. I see it as a limited all-star and believe it will be a high pick in draft.

Dire Fleet Interloper, like the vampire Queen’s Agent, has the same problem I spoke about above. At 4 mana, it’s still playable as a 2/2 menace creature, but relying on Explore to boost it to 3/3 isn’t smart when you’re making deck decisions. I’d take something with a more concrete effect like Raid than this, but I also wouldn’t mind playing it in an aggressive build that has a few combat tricks to get your opponent to over commit to it on defense.

Creatures with Raid are some of my favorite in the set. Not only are their abilities easy to control, but some of their effects are downright strong. For a common, Deadeye Tormentor is pretty pushed. I’ve never used Mind Rot or other discard spell in limited, but if you put it on a 2/2 creature I’ll definitely play it. If you’re playing blue and can bounce him back to your hand to play him again, he can wreak havoc on your opponent’s hand and give you more card advantage.

Fathom Fleet Cutthroat isn’t quite a Raid pirate, but his ETB does rely on you attacking. I’d personally play with him in a RB pirates strategy to give you access to more damage effects so you can always destroy a creature when you play him. If you’re facing dinosaurs and can’t fight through them, Fathom Fleet Cutthroat is your David to their Dino/Goliath. It’s a high pick for me in limited, even though it’s only a common. Great for aggressive decks too. 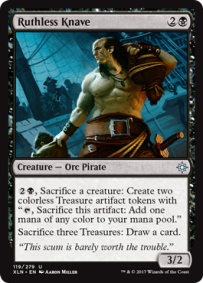 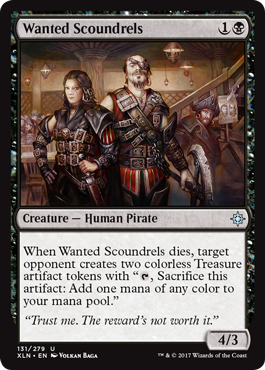 This group of pirates are right at home in the crew. They might not be the best, but they damn well know how to fight. Wanted Scoundrels hits incredibly hard early in the game and is hard to deal with early in the game. Once they die your opponent gets their “reward”, but I think it’s a worthwhile trade off to get a 4/3 creature on turn 2. Desperate Castaways make themselves right at home in treasure decks, so make sure you have more than a few ways to make them. I’m confident you’ll be able to get yourself some treasure by turn 3, be it from Depths of Desire or other effect. If you’re playing an aggressive deck, both the Castaways and Scoundrels are welcome additions.

The final pirate in black I’ve chosen is Ruthless Knave. If you have a lot of treasure laying around and you’re not using it to ramp into anything, he knows exactly what to do with it. For the cost of 3 pieces of treasure he’ll draw you a card, which isn’t bad considering this ability comes on a 3/2 body for 3 mana. If you’re on the defense and are in dire need of something to stop the other player’s beatdown, he can put those dying creatures to good use and turn them into loot. While I don’t see him being a high pick outside of a treasure based deck, I think he’ll end up being a useful card.

As always, black gives us a 1 mana deathtouch creature, but unlike recent rats and and scorpions we saw at the 2 mana mark, Skittering Heartstopper makes you pay mana for the effect. On the plus side, it has 2 toughness so you opponent won’t be able to use their tokens to kill it if you attack, and it can block 1/1 creatures all day.

Lurking Chupacabra finally gives you a reason to draft or play those cards with explore. Looking at the overall number of explore triggers, I don’t expect the effect to happen that often. I’d be hesitant to play the horror if you didn’t have any effects, but if you have 2-3 in your deck I think the Chupacabra would be worthwhile. 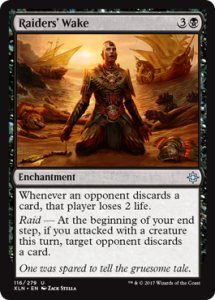 I’d like to give special attention to Raider’s Wake. This could be an extremely powerful card in limited. If you’re playing big creatures like Looming Altisaur, unblockable blue creatures, or flyers, it will be incredibly easy to activate the raid trigger again and again. If this only made an opponent discard a card at the end of your turn, that would be strong, but discarding AND losing 2 life? This seems incredibly overpowered in limited. Besides giving you card advantage, the life loss will add up quickly, especially if you play more discard effects like Deadeye Tormentor, Duress, or Heartless Pillage. Is it quite possible to play discard control? If you can draft 2 of these, it must might be. I’d even consider this card splashable due to the overall effect of it. I’d first pick it in packs 2 or 3 if I was in black, and I think I’d take it very high in the first pack as well if it was passed to me early.

This brings us to my last 4 recommended cards from black in Ixalan. Here we have our removal cards, and pseudo removal cards. I say pseudo, because Skulduggery probably won’t kill any creatures straight out, but it’s an acceptable tempo effect that can help your creatures kill another one in an aggressive deck like UB Pirates or BW vampires.

Contract Killing gives you outright killing power, as well as ramping you from 5 to a possible 8 mana on turn 6, but that 5 mana and sorcery speed doesn’t put it up there with the best removal in XLN limited. Those two spots go to Vanquish the Weak and Walk the Plank. Vanquish the Weak is a great card against any strategy other than dinosaurs, and even then it hits quite a few (especially in red). While Walk the Plank is blanked by merfolk centered decks, it’s an amazing removal spell against everything else. Definitely an early draft pick. I rate all of these higher than I probably would white removal though because they outright kill a creature.

Black really impressed me, and I think I’ll be on the lookout for different synergies with it during the pre-release and in drafts. The removal isn’t as good as it’s been in recent sets, but you’ll still want to take it in draft higher than the other colors. A dead threat is a dead threat. With the evaluation of black, I’m liking UB pirates as an archetype more and more, but BW vampires is still underwhelming. Things will slow down a little bit with the publishing of this article, but you should still be able to read the next one, red, by Wednesday. I expect the pirates archetype to become more impressive, but we’ll also get a better look at the dinosaur archetype for the first time. That’s going to do it for black, but if you have any comments about the article or some observations of your own, feel free to post them below!

2 thoughts on “Ixalan: Playing to Your Weaknesses – Black”