Bang for your Buck: Investing in Cards for Rivals of Ixalan – Artifacts, lands, and Multicolor

I got really slammed last week with both work and other obligations and had planned to post this a few days ago, but I wasn’t able to get around to it until this weekend. Apologies, but thankfully there hasn’t been too much in the way of standard events over the past few weeks. Last weekend the pros played a Modern pro tour, and we’ve also seen an explosion of interest in Pauper, but standard has been slowly stewing over the last few weeks. Aggro decks seem to be doing rather well, with both mono red and RB aggro seeing quite a bit of play, but there’s also been a resurgence of Mardu Vehicle decks decks seeing play in this metagame. This means we could see some movement on multicolor lands and cards, but first we should check out what happened since last time.

Only a dollar for Sorcerous Spyglass? Sign me up. Besides shutting down planeswalkers, it also does a good job of shutting down Walking Ballista, Vehicles, and transformed lands. I think it will be seeing a lot more sideboard play in the near future. Get it now for $1.

I don’t think it will go up by much, but with BR aggro and Mardu Vehicles making a comeback this season, I wouldn’t be surprised to see Scrounger go from it’s current $.75 to about $2-3 by seasons end. It’s an all round good aggro card that fits in many decks.

God-Pharaoh’s Gift still has a lot of fans, and I think the casual market could push this to $3-4. You still see it showing up at some tournaments, but it hasn’t had any impressive finishes lately which should keep it’s price in check.

In other news, water is wet and Bomat Courier is still good in red based aggro decks. I think it could go up from its current price of $1.25 if decks like BR or mono red put up some good numbers. Not a big money card, but maybe $2-3 by the end of the season.

I’ve also heard of some Dynavolt Tower decks doing alright at some standard tournaments, but I doubt there is enough life left in the card to cause a spike above it’s current $.50 price. I haven’t given up Metalwork Colossus though. As far as Fringe strategies go, Colossus/Marionette Master or Colossus/Madcap Experiment decks are some of the most fun to play. I wouldn’t be surprised to see Colossus to gain more value after rotation, so I recommend a buy in at $.50. 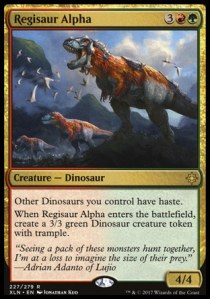 Dinosaurs might not be the strongest deck out there, but it’s a lot of fun to play and I think they have a lot of appeal for the casual players. It will be a tier 2 deck for the foreseeable future, but I think cards like Regisaur Alpha are worth the investment at $4.25. Core of any dino deck, it could see play and hit $6-7 by spring.

Vraska, Relic Seeker used to be a $25-$30 card but has dropped all the way to $11.50 due to the banning. The only decks that really played her, GB Snake and Sultai Energy aren’t seeing much play anymore. I think the current price point is a good place to get in. If she sees more play, she’ll easily go up to $15-$20 again. I expect her to go up by spring. I’d also like to add that she’s been keeping a steady value about about 1700-2000 yen in Japan so there is definitely demand out there still.

I know that Grixis energy has been showing up here and there at standard events, but I don’t think Nicol Bolas, God-Pharaoh will be showing up there. However, at $7.25 it seems like a good buy in. Grixis control could make a comeback this season, especially since red gives the deck access to Abrade, Sweltering Suns, and a number of other good cards. It’s not a sure thing, but also not going to lose you money in the long run.

Dovin Bann isn’t an amazing card, but could see some fringe play in the future so why not get him for your collection at $2? Not going up any time soon, but will probably inch up after rotation in fall. Good long term hold.

I’m not sure Botanical Sanctum can hold its $9.25 price, especially with people slowly moving away from Temur and Sultai energy decks. I think people will start selling their copies at this price, which should push the price to $6-7 by the end of the season. If you don’t need them, sell them for a nice profit.

As for the other lands in AKH block and XLN block, I think they are all in a good place now and aside from Scattered Groves at $1.75, there really aren’t that many deals at their current price. Spirebluff Canal deserves its $8.50 price tag, and most of the others are between $4-5 which sounds about right. I doubt we’ll see much movement out of any of the other lands until new archetypes push the demand higher, but if we have multiple viable decks in the format that could be kept from happening.

There are some noticeable deals if you’re looking on pulling the trigger on some higher costing cards, but otherwise all’s rather quiet on the standard front. We just had another modern tournament this last weekend, and next weekend we’ll finally get a look at what Rivals of Ixalan has brought us. I’m sure I’ve missed a few cards here and there, so if you’ve got the inside track on some other cards I didn’t mention in this month’s series, I’d appreciate it if you could leave them down below in the comments section! Well, that will do it for MTG Financials this season, I’m looking forward to posting more store reviews this season, as well as getting back into my Frontier articles since the metagame has really heated up on line and the God of Frontier tournament is on the horizon at Hareruya this March.

← Bang For Your Buck: Investing in Cards for Rivals of Ixalan – Green and Red
A New Frontier – (Land)Falling in Love All over Again →

3 thoughts on “Bang for your Buck: Investing in Cards for Rivals of Ixalan – Artifacts, lands, and Multicolor”