A New Frontier – Unrivaled: The Impact of Rivals of Ixalan on Frontier

“A New Frontier” is a series of articles based around the MTG format created by Hareruya and Big Magic in Japan that uses only cards with the new border from the M15 set and onward. In these articles I plan on follow the results from tournaments, talk about viable decks in the format, as well as powerful cards. I hope to do at least an article each month with updates on the format, results, as well as the current status of its popularity. Please keep in mind that these are merely exploratory articles and that the Frontier format is still trying to find its footing. It could end up doing very well and develop a following like EDH has, or become just another footnote like Tiny Leaders.

Things aren’t going too well for me in season 4 of the Untap open league, but that’s to be expected when you play an untested deck and don’t end up having enough time to iron out the kinks. I wanted to use some new cards from Rivals of Ixalan, and because of that I made some bad card choices due to the lack of information. Rivals of Ixalan had only been out for a week or two when season 4 of the Frontier Untap League went live, so I had to make do with what I had. Sure I could have played with my top 4 deck from season 3, but I wanted to try something different. Hareruya still hasn’t had their God of Frontier tournament yet, and as it will be happening in March towards the later part of Rivals of Ixalan standard, it should give Frontier ample time to explore the new cards as well. What I aim to do today is to give you a look at what we can expect in the format in the future from this set. Not much showed up in season 4 of the Untap League, but luckily we have a few tournaments from Hareruya to look through as well.

I’ll be covering all rarities and all card types in this article, as well as the possible financial impact of RIX on Frontier cards. Just as before, I’ll be using a ranking system to categorize all of my picks. Please keep in mind I’m not talking about cards that will be only in Tier 1 or Tier 2 decks, but that could fit into a variety of strategies.

The highest level, 5 stars, are strong cards that you’ll see all around the Frontier format in various decks. These are probably 4 ofs, and will probably be the first cards to see a spike this format takes off.

At 4 stars, we see cards that are still powerful but are usually confined to 1 or 2 decks. This could be a combo piece that only fits in one deck (but is incredibly powerful), or a card that can only reach it’s full potential with a deck built around it to support it. Once it gets going though it’s almost impossible to get rid of.

For 3 stars, we have cards that are showing up more in the sideboards than the main boards, but depending on the metagame they could show up and be potentially good against a large variety of decks. These are cards that could be silver bullets against certain strategies, but also be weak to other cards unintentionally.

Once we get to down to 2 stars, we start to see fringe playable cards that are good in the lower tiered decks, but probably not a first choice or even the best choice for that deck. You’ll rarely see these 2 star cards played.

1 star is a card that will probably NEVER show up in the format. For the sake of time, I will be focusing mainly on 3-5 star cards and only briefly touching on 1 and 2 star cards when they become relevant.

At the end of the article I’ll also be discussing which cards in Frontier become stronger as a result of cards from Amonkhet, and I’ll speculate which archetypes will see an increase in power.

I believe that Jadelight Ranger has the potential for the biggest impact in Frontier from Rivals of Ixalan. The most obvious application would be in a merfolk deck, but that deck isn’t quite a tiered deck yet and needs more testing before it makes the big time. I’ve already seen it showing up in some Hardened Scales decks since it can potentially become a 6/5 when it comes into play, but I think it would also be a good card to have in some midrange beatdown strategies such as Temur, Jund, or GR monsters. I see it as a roleplayer in quite a few decks, which is a textbook 5 star card even if it doesn’t become an all star.

Rekindling Phoenix is another card that has quite a few applications. It fits well in almost every R/x beatdown deck and would also be fine in a decks like Ramunap Red/Atarka Red as an anti-sweeper card. It’s a good body with a decent cost, so I’d expect it to show up more in the future. Will definitely be a 4 of in any deck that plays it. 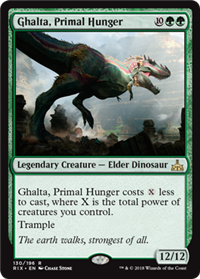 Ghalta, Primal Hunger is another card that I think will see more play as midrange asserts itself more. GR monsters could easily play it, as well as Abzan if it wanted to. Sure it dies to Murderous Cut and Vraska’s Contempt, but landing this big dino early is almost as as scary as an Ulamog or Emrakul. I really like it with Sin Prodder and Combustible Gearhulk in a GR monsters deck. 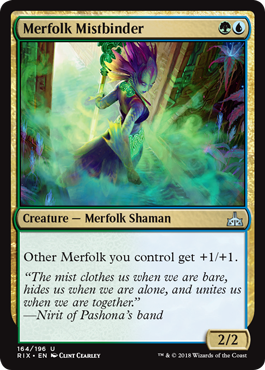 These last 2 will only fit into the new Merfolk archetype, but they’ll definitely be 4 ofs or a major part of that strategy. I think the strategy needs some tweaking to reach tier 2, but if my hunch is correct, then we should be seeing some more Merfolk in Dominara which will make these quite good in frontier. If you’re a fan of them in modern, I recommend picking them up on the cheap before Dominara is spoiled.

The card with the most impact at the 3 star level is going to be Hadana’s Climb in my opinion. The Hardened Scales archetype is going to absolutely love this. Play a Turn 1 Scales, a turn 2 Hangarback Walker/ Walking Ballista with two counters, and then drop this on turn 3 to flip it. Great way to give your already scary creatures evasion and end a game quickly. I expect many Hardened Scales players to pick this up and play it as at least a 3 of.

Warkite Marauder has some potential in Bant Humans, as well as UW flyers since it effectively protects itself from any potential flying blockers early on. It’s also not bad later in the game when you can’t swing through an opponent’s bigger bodies. It might run into some problems against Smuggler’s Copter, but which deck doesn’t struggle with that vehicle? 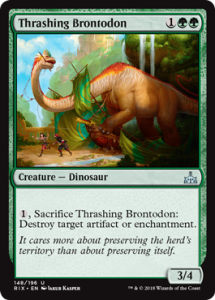 I’m a big fan of Thrashing Brontodon in green beatdown/midrange strategies for it’s 3/4 body, but the ability is also incredibly relevant. Being able to have a beater in your main deck that can take out a Search for Azcanta, Smuggler’s Copter, or Ensoul Artifact is incredibly useful. Good card for non human Bant Company, Abzan, Jund, and any other green deck.

Deeproot Elite is another card that I think can become rather strong in Frontier in the future, but its future will hinge on what’s printed in the next few sets, just as Kumena and Merfolk Mistbinder’s are. Will be a 4 of, but will struggle against cards like Fatal Push and Reflector Mage in this current meta. 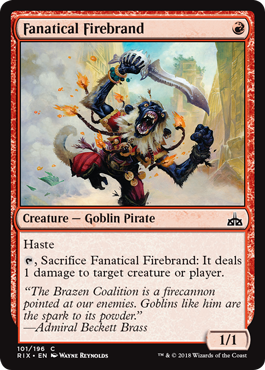 Fanatical Firebrand and Direfleet Daredevil should both find their way into red Frontier decks eventually. Firebrand might not be the best call for Ramunap Red or Atarka Red players over cards like Monastery Swiftspear, but I’m not going to overlook the possibilities of Mono red goblins showing up again in Frontier either. It has good good synergy with Foundry Street Denizen and Goblin Pile Driver, and can throw damage into an opponent’s face which is useful.

As for Dire Fleet Daredevil, it seems like a decent card for red to use against spell heavy decks like control, stealing their draw spell or burn, but I think it could also be used in the mirror match to take an opponent’s Atarka’s Command and use it for your own for an alpha strike. Will it be used as a 4-of? Probably not, but in certain metas is can be really good.

So many possible applications with Angrath. First and foremost I see it as SB card that Grixis control decks want to use in the control mirror. It destroys opponent’s hands while also hitting their life total. It’s also a good card in Jund or Mardu midrange decks that are skewing more to the controlling side. Wiping an opponent’s board then having them play a big beater only for you to steal it the following turn can be soul crushing. Even better if you take their last creature and sac it if it has a cmc of 3 or less.  His ultimate is also a very scary ability against delirium, Dredge, and Rally decks that seek to fill up their graveyards a quickly as possible. More of a meta card, but he has the potential to be very very good. I might just brew with him in the future.

Best of the Rest

While it doesn’t seem like Rival of Ixalan has made that much of an impact on Frontier, I think it does a good job of setting the stage for future competitive archetypes like Vampires and Merfolk. We don’t have a lot of all stars, but we do have quite a few versatile cards. So how will it effect the current meta? Let’s see which decks are the winners and which are the losers.

I did quite a lot of power shifts last time but I don’t think the other archetypes I haven’t covered will change that much. However, if you have some other observations about the format and how Rivals will effect Frontier, I’d like to hear about them down below. The Frontier Untap League is going into its final week of swiss for season 4, which means that season 5 won’t be too far along now. If you’ve been meaning to join in the fun of Frontier, this is a good time to do so. Join our Discord server and talk about the various decks and strategies, and in about 2-3 weeks, play in our league tournament! All you need to do is make a Discord account and we can add you to our group (https://discordapp.com/channels/343099251242303489/343154228035846147)