Dominaria: Playing To Your Weaknesses – Black

Leave it to black to bring you back. I always felt as though black back during when I first started MTG was some freaky stuff. Cards like Demonic Hordes, Ebon Praetor, and Dark Ritual had a very dark feel to it. Recent past sets have had cards that fit in the color wheel, but not so much in the flavor wheel. Dominaria black cards hark back to that era of darkness, evil, and power and I think you’ll agree with me after seeing today’s cards. Out of all of the colors so far, black gives me the most nostalgia. 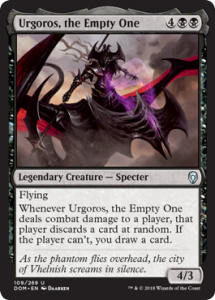 Who doesn’t remember Hypnotic Specter? It was such a popular card during those first few years that people even nicknamed it “Hippy”. Urgoros, the Empty One doesn’t cost 3 mana like Hippy does, but Hypnotic Specter didn’t draw you a card if your opponent didn’t have any cards, and it also only had a 2/2 body. Urgoros is a scary card to face off against. It’s no pushover on offense, has evasion, and it also has quite the ability. White might have some good flyers that can match it, but black has better removal that can deal with potential blockers. It’s not quite bomb level, but Urgoros is going to be a first pick in draft about 90% of the time I think. It’s going to be good in this limited format. 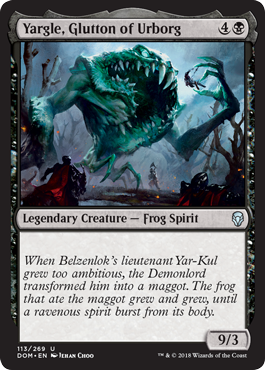 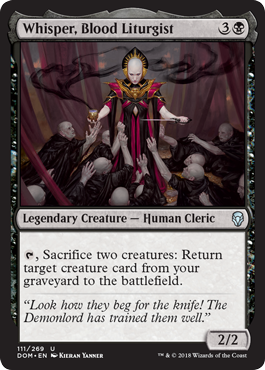 Yargle, Glutton of Urborg might be nothing more than a vanilla creature for 5 mana, but he’s already gained a lot of fans both due to his backstory and to his power level. He’s an angry toady that is one of the most efficiently costed finishers in limited, giving you 9 power for that 5 mana. However, his 3 toughness makes him susceptible to Lightning Strike type effects, and he can also be blocked somewhat easily with 2 creatures. Three toughness is slightly more than glass cannon status, but not by much.

Whisper, Blood Liturgist has a freaking sweet ability for a 4 mana uncommon creature. This legend brings back any creature you want from the graveyard for the low cost of two creatures. That might seem like a steep price, but if you’re playing with Saprolings in a BG tribal, that should be nothing. Being able to get back a Verdant Force or Demonlord Belzenlok early after putting it in the graveyard will lead to some downright crooked games. I think Whisper is splashable and also first pickable like Urgoros up above. 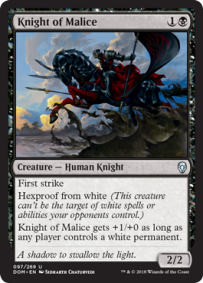 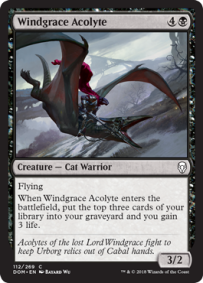 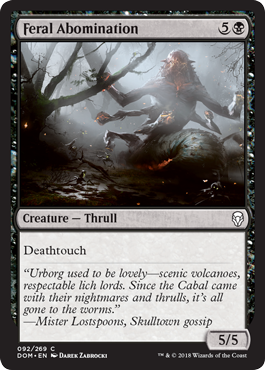 These next three creatures are all solid additions to any black limited deck, but not without their drawbacks. Feral Abomination is realistically costed at 6 mana for a 5/5, and you get Deathtouch on it as well, but is it even worth it? At 5/5, you’re already going to be trading with just about any large creature that attacks or blocks, but I guess you could say it’s good against people playing lots of combat tricks? Want to make your guy a 7/7? He’s still dead to Feral Abomination. Good finisher.

Knight of Malice will run into the same problems as its white brethren did. It’s still a 2/2 first strike which is great, but as for the bonus you probably won’t get it in a lot of your games, just as the white hexproof wont’ really come in handy at all. Still a great card to have on your curve.

Well Windgrace Acolyte gives you some evasion in black, and also gains you life, but at the expense of your library and at 5 mana. I guess it would work well in a Whisper, Blood Liturgist deck at least. Put one of your powerful cards in the graveyard turn 5, then get it back a turn later with the ability to play some other follow up cards. 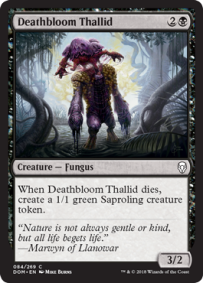 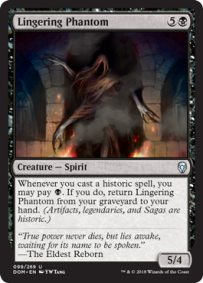 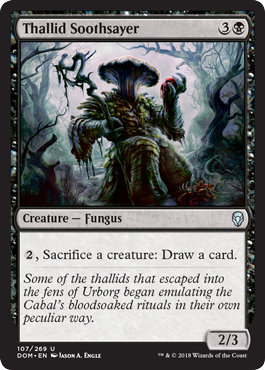 The only other cars I think worth mentioning are the Thallids and Lingering Phantom. Lingering Phantom gives you a long game and lets you recur it from the graveyard and all that is asks is that you play an artifact, legendary, or saga. I think you can realistically use this ability about 2-3 times in sealed, but probably more in draft which earns the card a spot in your limited deck as a decent beater.

Deathbloom Thallid is slightly better than a vanilla card with its token ability upon dying, but Thallid Soothsayer should be really good in this format, especially in a GB Saproling deck that makes token after token. I would actually take Soothsayer highly in draft for his ability. Besides being a sacrifice outlet for cards like Slimefoot, the Stowaway, it’s an all around good card for limited, especially for black. Anything that gets you card advantage is worth playing. 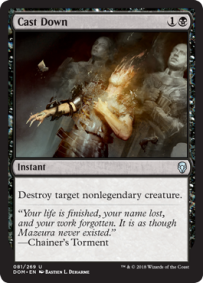 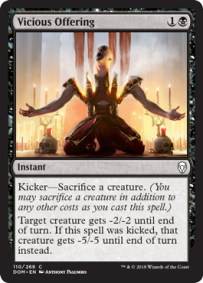 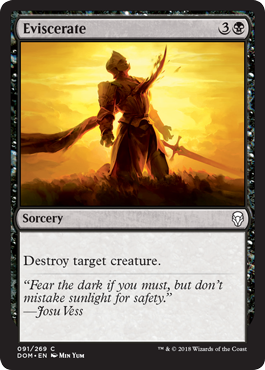 Now this is what I’m talking about. What a great removal package black has. Cast Down might not be as strong as it will be in standard due to the concentration of legends in this limited format, but it will still have quite a few targets available to it. You just can’t beat 2 mana instant removal.

Vicious Offering is also a great piece of removal at 2 mana. It acts as early removal or powerful late game removal, meaning you can deal with both aggressive decks and more midrangey types with it. The kicker might be kind of steep for some decks, but I think if you have any kind of token effects in your deck you won’t really mind the kicker cost. It’s also instant speed as well which gives it even more playability points.

The card I think I’d rather have in my limited pool is Eviscerate though. Yeah it’s sorcery speed and 4 mana, but it kills anything. If you’re facing down a 7/7 dragon or or Elemental Avatar and you’re NOT playing white with exile effects, you’re going to want to have Eviscerate in your arsenal. If I had to choose between the 3 in one pack, I’d go Eviscerate first, then Cast Down, and lastly Vicious Offering. All are good, but I think the 4 mana sorcery is better to have. There are cards that will get out of control quickly if you don’t take care of them. 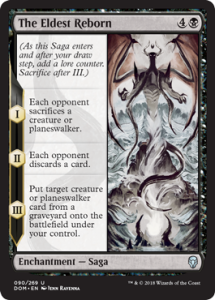 You can kind of consider this Saga removal, but I’d classify it as an effect of its own. A sac effect for 5 on its own isn’t that great, especially when an opponent chooses, but making them discard a card the following turn and then reanimating a powerful card from your graveyard the turn after that? Where do I sign up. Did I say YOUR graveyard though? Sorry, it’s ANY graveyard. If you somehow managed to kill your opponent’s Muldrotha, the Gravetide, you can reanimate that. The same for a Jaya Ballard or Teferi. This is a VERY strong effect and I think you definitely want to play this in your limited deck alongside some good removal. Kill something good the turn before the 3rd lore counter goes on there and you’ll get some MAD profit from The Eldest Reborn. I think it will be a high pick in draft as well. 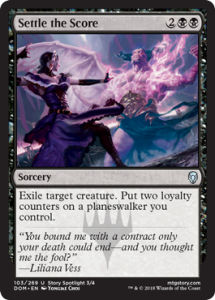 Another great piece of removal, right up there with Eviscerate and Cast Down. Aside from Multani I can’t think of too many creatures you’d want to exile, but it’s still on par with Eviscerate, and even better if you’re playing a planewalker. There are some graveyard shenanigans like The Eldest Reborn’s final effect and Primevals’ Glorious Rebirth, so because of the exile clause, I’d rate it slightly higher than the other removal.

Black is looking really impressive. Great removal for all sorts of situations, some graveyard manipulation, and even some powerful creatures that aren’t afraid to spill some blood to get the job done. Definitely a color you want to be heavy in if you’re playing Dominaria limited, but I’m guessing other people will be undercutting you left and right for the cards. It’s going to be very popular. As long as you draft smartly you should be able to build a good black deck though, especially if you vary the themes. So far it’s looking like GB Saproling/Sacrifice will be a thing, UB Discard/mill with some graveyard manipulation, BW Knights, and possibly BW legends with Arvad the Cursed.

That will do it for today’s article, but hopefully I’ll be able to release red on Thursday before the end of the day. I know I still overrate some cards from time to time, so if you have conflicting thoughts on the cards I talked about today, feel free to voice your opinions down below. Otherwise, be sure to join me over the next few days while I finish out the rest of the colors and the cards you’re most likely to see in Dominaria limited.