Guilds of Ravnica – Playing To Your Weaknesses: White

I’ll admit I haven’t been that psyched for limited in Magic for a long time. M19 didn’t really do it for me, Dominaria was good and fun to play, but none of the soon rotating sets before that really got me going. With Guilds of Ravnica though, I can barely contain my excitement. Wizards is finally coming full circle and giving players what they’ve been craving for years: Good removal, strong creatures, and powerful synergies. I don’t know if it will end up being as good as the previous Ravnica block or Khans of Tarkir limited, but I think it will be both fun and challenging to build with. Let’s start with white and see what’s playable. 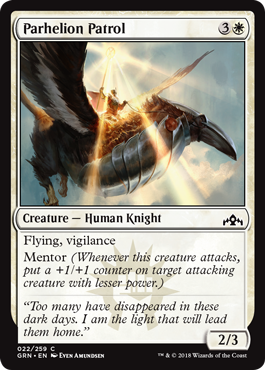 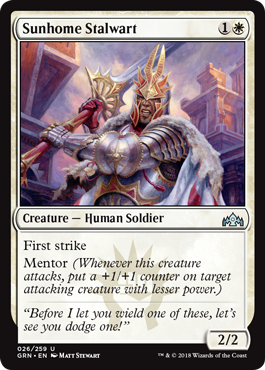 One of the new mechanics of Guilds of Ravnica is Mentor. It’s focused mainly around Boros aligned cards. A lot of people I’ve talked to don’t like it and think it’s probably the worse one in limited. I’m going to go against the flow and disagree. I think Mentor is a deep mechanic that works great with combat tricks, anthems, and Auras. Parhelion Patrol and Sunhome Stalwart are playable in their base forms in my opinion. A 2/3 flyer with vigilance for 4, and a 2/2 first striker. Their mentor abilities probably won’t trigger most of the time unless you’re playing a lot of tokens or a fast aggro deck, but if you can pump up their power with cards like Gird for Battle or  Sure Strike the Mentor ability becomes a lot more consistent. 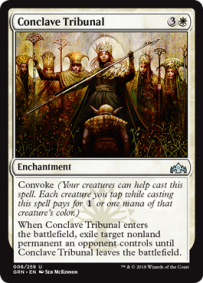 The other white mechanic is returning from the previous Ravnica block: Convoke. Limited decks tend to be creature heavy and if you build you deck correctly you’ll have a good curve with a balanced number of 2 and 3 drop creatures, or spells that can make multiple bodies to allow Convoke cards to be cast more quickly. Flight of Equenauts is one of the strongest non-angel flyers we’ve seen in a long time. A 4/5 body in the sky can be rather fearsome. That 8 mana cost might seem a little high, but I think it won’t be a problem to play this for 5 mana if you’re playing on curve. Who wouldn’t want to play a 4/5 beater in the sky for 5 mana?

Loxodon Restorer might not have as much of an impact on the board, but it’s another card that could fill out your deck. You’ll most likely be playing it for 4 mana if you’re on curve, but there are probably other 4 drops you’ll be wanting to play instead. A 3/4 body for potentially 4 mana that gains you 4 life will probably end up being one of those cards that gets cut from a deck or fits in one of your final slots.

Conclave Tribunal is basically an Oblivion Ring effect since you won’t be casting it earlier than turn 3. I usually like 3-4 mana exile effects that hit any non-land permanent, but GRN (Guilds of Ravnica) feels like it’s going to be a minefield with all of the playable mainboard enchantment hate like Knight of Autumn. Yes it has a strong effect and is great in any white deck, but it’s also less of a sure thing if you’re playing against white or green. 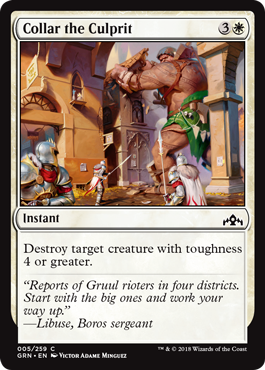 While we’re on the subject of removal, we might as well look at what else white has to offer. Luminous Bonds makes yet another return and is giving Colossal Dreadmaw a run for it’s money in the standard reprint category. It’s basically Arrest but it can’t stop abilities from being played. I don’t think that will be such a big deal this time around, so it will be a good removal card again in Guilds of Ravnica. Collar the Culprit is kind of mimicking Reprisal, but instead of killing a creature with high power it’s killing a creature with high toughness. Most of the dangerous cards are going to have high toughness and power so this card will end up being quite useful. You won’t hurt those decks with go wide strategies but it should be good against green, black, and red decks for the most part. 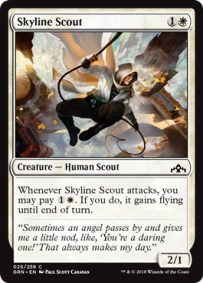 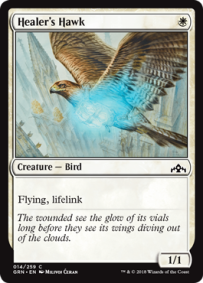 Our next batch of cards are the other flyers of white. Rather simple and nondescript with nothing that really sets them apart other than fitting on your curve well. Healer’s Hawk gains you life and can attack early, Skyline Scout seems like it would fit well in an aggressive Boros deck, but Roc Charger actually has a lot of potential, like Pegasus Courser in M19. Not a lot of people liked it at first but it ended up being a great way to push through damage and give your more powerful cards evasion. I expect Roc Charger to fill a similar roll in GRN limited. 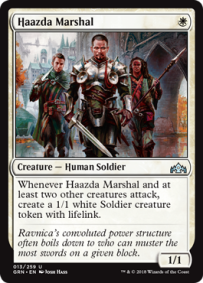 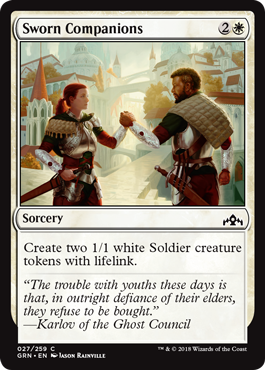 Next we have our token makers. Hunted Witness is the next iteration of Doomed Traveler, except that instead of getting a 1/1 flying spirit token, you get a 1/1 life linker instead. Not bad but unless you’re looking for sacrifice fodder it probably won’t see a lot of play. I expect it to get better in Orzhov in the next set. Right now I’d say it’s filler.

Haazda Marshal has the potential to be really good and a constant source of bodies but it’s incredibly fragile and easy to block. I like it alongside cards like Cosmotronic Wave in a Boros deck, or Passwall Adept in an UW deck. If you’re playing a lot of combat tricks, anthems, or other pump effects I think it’s worth a spot.

Well I guess we will never get Raise the Alarm back in standard. Sure we had Servo Exhibition in Kaladesh, but cheap token makers have been few and far between. Sworn Companions mimics Queen’s Commission from Ixalan almost exactly except for the typing. Getting more than 1 body from 1 card will never NOT be playable in limited, so I can’t say anything bad about Sworn Companions other than wishing Wizards switched it up a little. Probably a little better in this set because of Convoke.

Inspiring Unicorn is amazing if you can keep it alive. It’s a reusable anthem effect that’s great in go wide strategies or decks with a lot of evasion. I think it works great in both Selesnya and Boros decks that can play a lot of cards on curve and then attack with the Unicorn on turn 5 to bring the pain. I think it will be a high pick in limited for white decks. I just wish it wasn’t so fragile.

Today’s last card is Intrusive Packbeast. Vigilance is good in this format because of being able to attack then use it to Convoke something, but I like this card more for its ETB ability. Tapping down two creatures can open up a lot of doors for a UW flyer or Boros aggro deck. I wouldn’t mind having this on the top of my curve.

White’s not bad, but I think it will take a few more cards to make it work. Good deck builders will be rewarded for patiently putting together a Mentor based strategy. I’m sure most of the cards will be passed to you along with the combat tricks, so you can prey on those slower decks if you build your deck well. Not too many good support cards for non Selesnya or Boros strategies, but there’s a decent number of playables.

What do you think of the color so far? How would you build with it? If you have any suggestions or comments I’d like to hear from you down below. I’ll be working on blue next and talking about the impact of Surveil and Jump-Start, but it might not be out until later this weekend. I hope you’ll be back in a few days to check it out!

← A New Frontier – Working the Core: The Impact of M19 on Frontier
Guilds of Ravnica – Playing To Your Weaknesses: Blue →