Welcome back to the next round of Playing to Your Weaknesses. I’ll be starting with the base colors then moving on to the guilds. Today’s color will be white, which splits between the Azorius and Orzhov Guilds. White Azorius cards are known for their lock down effects and flyers, where as Orzhov white cards tend to have extra abilities tacked on to them for extra value and are more geared for destroying things. In Ravnica Allegiance, Azorius white cards have the Addendum ability added to them which makes casting it on your turn better than on your opponent’s, and the Orzhov cards gained the Afterlife ability which put a Spirit Token into play when they die. I’m really excited about afterlife, but I’m sure this limited format will have plenty of ways to deal with armies of 1/1 token flyers. Let’s take a look at white. 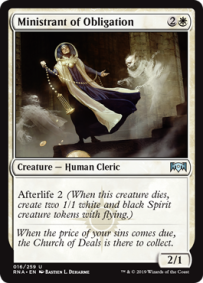 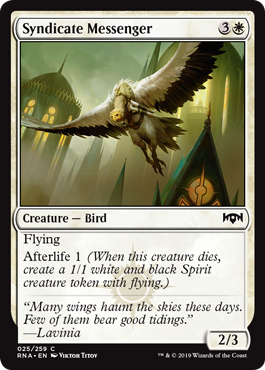 I’d like to start with these afterlife cards, which have me super excited. Each of these cards create card advantage for you by replacing themselves with a body when they die. You can trade with your opponent’s creatures or they can absorb a removal spell, but when the smoke clears you’re left with a creature with evasion while your opponent is down a creature or card. Ministrant of Obligation isn’t going to win an battles, but it has one of the best non-rare Afterlife abilities by putting 2 bodies into play when it dies.

Knight of Sorrow is slightly better with a 3/3 body that can block multiple creatures, but my favorite is Syndicate Messenger. It’s a solid 2/3 flying body that can block spirit tokens very easily, and when it dies you’re left with another flyer. My first strategy with these cards would be to play aggressively with go wide cards, and there are definitely some that go along with Afterlife that I’ll cover later. 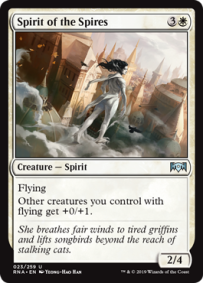 Civic Stalwart seems like an all around great card for any white deck, especially one going wide with Afterlife spirit tokens. Play it for an instant buff to all your creatures and go all out on your attack. On the other end of the spectrum, Angelic Exaltation works very much like the old Exalted Mechanic, meaning a creature attacking alone gets a bonus but not when they attack together. This effect is more like Exalted Angel in that it adds up all of your creatures instead of just the basic +1/+1. This can put huge pressure on your opponent  in a creature heavy deck and it’s doubly powerful in a flyers deck like UW or something with a lot of Afterlife triggers. Lastly we have Spirit of the Spires, and besides being a great body on a flyer that can block all day, it also makes your Afterlife spirit tokens that much harder to kill. In the mirror, your tokens will be 1/2, while your opponent’s will be 1/1s. Definitely something to consider.

Spirit of the Spires – RATING: 2.5 Stars 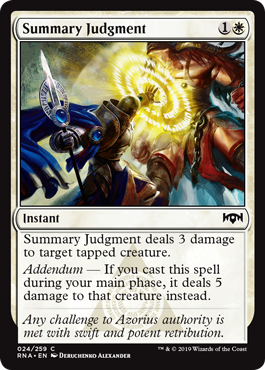 Gideon’s Reproach gets quite the upgrade with Summary Judgement. It still can kill a lot of attacking creatures, but on your turn it gives you extra damage that takes out even the toughest of creatures. Great piece of removal in white, and pretty easy to cast as well.

Bring to Trial is a spin on your traditional exile effects, except that this time around it only affects the scary beaters and finishers that your opponents play. It won’t be that effective against faster decks or go wide strategies, but hits decks like Gruul rather hard.

Sky Tether is an interesting Arrest/Pacifism effect. It’s incredibly easy to cast and basically takes the other player’s best attacker out of the game. Sure they can still defend with it, but if you needed time to set up a good defense, this is a good card to do that. 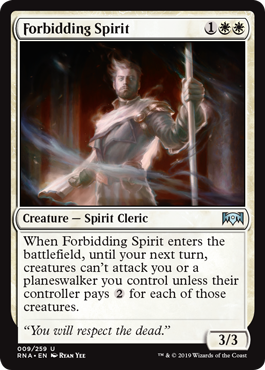 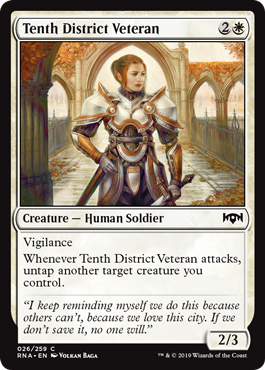 We got some roleplayer cards next. Both fit well on the curve and have interesting effects on them. Forbidding Spirit effectively shuts down 90% of attacks for one turn and has a decent sized body on him. If you need one more turn to get out your finisher or to tick up your planeswalker, he should be a great speed bump against your opponent. Tenth District Veteran has good stats as well, and also vigilance which makes it an asset both on offense and defense. You can attack with one of your big creatures and then untap it right away to put it back on defense so you aren’t left wide open. It effectively gives another creature vigilance when attacking.

Watchful Giant might be kind of underwhelming as a 3/6 body for 6 mana that puts a token into play, but it’s a great defensive card. It’s hard to kill and effectively gets your 4 power and 7 toughness from one card. Maybe not a high pick in RNA limited, but pretty good filler. I also kind of like Justicar’s Portal in this format. It’s a cool combat trick in that you can block and then save your creature from death by blinking it, or you can blink it before blocking to give it first strike, and the other use for it is to reactivate an ETB effect like Watchful Giant’s or Civic Stalwart. Should make for some fun combat.

So white seems pretty good in this limited format. Good flyers, good blockers, good removal, and lots of ancillary cards for a number of strategies. So far it feels like the format could be really grindy with all of these tap and exile effects and the large number of token creators. I expect Ravnica Allegiance Limited to be slower than GRN, but incredibly complex and rewarding to play. I look forward to blue, which I’ll be working on tomorrow. If you have any comments or suggestions about today’s color, feel free to leave them down below. Thanks for reading and see you next time.

← A New Frontier: God of Frontier – Playing all the ‘Angels’
Ravnica Allegiance- Playing to your Weaknesses: Blue →