A quick insight on cards

As my first post in the category of Magic The Gathering, I want to give a quick history of what I’ve learned so far about the card culture over here. I started playing MTG when I was young, about 12 years old to be exact. One of my neighbors that was in middle school already introduced me to it after he started playing it, and I played/collected from Revised Edition all the way until Stronghold/Exodus. I would say that my first time playing for those few years I was focused more on collecting than anything else. There weren’t too many card games for young kids, and not a lot of my friends played. It was basically my brother and I. The whole CCG/TCG was still in its infancy stages when I stopped in 1998 or so.

Fast forward to 2008, 10 years later and I start collecting again during the Eventide/Shadowmoor sets, and start playing again (casually at set launch events) during Shards of Alara. I played on and off but once I moved back to Japan and M12 hit, I was hooked again. It’s no longer casual. It’s a great way to keep your brain healthy due to all the strategy involved, and also a great way to meet friends. I was only in Nagoya for a week 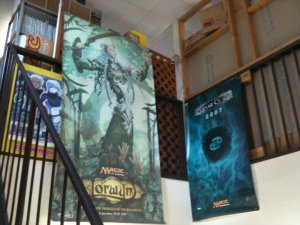 or two before my first Friday Night Magic and slowly but surely I started to meet the players in town. I recommend anybody who plays to go to an event in a foreign country if you live there. It will help you not only to meet people but also to improve your proficiency in that language. I’ve learned a lot of fun Japanese vocabulary over the last few months, and my Japanese continues to improve.

I apologize, I’ve already gone off on a tangent. Let me continue with the current culture of card games in Japan. If you don’t know, this year’s Magic World Championships were won by a Japanese player, Junya Iyanaga, and teams from Japan also fared well in the Team Tournament. Japan is definitely a force to be reckoned with. I think one of the reasons for this is the amount of exposure Japanese kids have to cards at a young age. While by no means is this something EVERY Japanese kids does (my Japanese friends they started playing when they were in elementary school, but that through the years maybe only 10-20% of the students actually got involved in any type of card games), it is something that is part of their childhood nonetheless.

Lets start with kindergarten aged kids and how cards are introduced to them. For boys, it’s usually a Dinosaur or Bug based card game where they purchase packs of cards with various powers, then go to select locations (anywhere from arcades to supermarkets) and play on special video game cabinets that have an interface that reads the card data and transfers it to the game. Pretty clever. The kids buy the cards (and collect tons of them), then have to pay to play the game. Not a bad way to make money. With the girls, it’s sometimes a little different from the characters perspective, but not the game so much. There are card games based on things like Hello Kitty and also fashion games where the girls collect the cards then play them on a similar arcade surface that reads the data from the cards and then uses them. There is also a Pokemon game that works in a similar fashion, but it’s not based on cards that much.

From Kindergarten to Elementary is where things really start to explode in the card culture. Suddenly there are games like Pokemon, Battle Spirits, Vanguard, and Yugi-oh and these draw tons of kids in. At one time or another, I bet every grade school kid has at least TRIED these games, even if they didn’t continue playing them. This is where the big money starts to come in. The kids play the games against their friends for the first time, not against a computer, and they need better and better cards in order to beat their friends. At this age (elementary-JHS) you also start to see kids going to tournaments at card shops, but not so much.

Outside of Yugi-oh, you don’t really see many of these kids continue to play cards throughout high school. No, in high school kids’ focus turns more to anime, manga, and video games, and that’s where a new breed of card games has come into it’s own. There is one I’ve seen in particular that seems to put all of these likes into one, called Stein’s Gate I believe. There seems to be sets/expansions devoted to various anime/video games such as the Persona series and tons of other recent anime (which I really don’t follow so I can’t tell you about).

After all of these games, after all of this conditioning, they get to Magic. Lots of the younger people I’ve played against only started about 1-2 years ago, fresh out of high school. They’ve gone through the gauntlet of gaming and come out a different kind of animal. They’ve been conditioned by rules and combos, and seem to “mature” incredibly fast (or at least faster than I did) in the Magic environment. 17 years in I’m FINALLY “getting it”, but these kids are understanding and exploiting the game much faster than I ever did. Their meta game, their way of thinking is definitely different from the USA and from my thinking. I look forward to playing and honing my game over here, as well as learning a few things from the Japanese playing style while at the same time bringing my own ideas and sharing them with the ever changing Magic community.

I thank you for reading and hope you continue to follow my future posts about MTG in Japan. In the future I will be profiling major cities in Japan that have large Magic communities, good stores, and big events (and some small ones) in hopes that English speaking gamers will be able to realize that this is a WORLD game and that they can always find a fellow card player if they look hard enough.

← My Plug in Baby
Hobby Shop Profiles in Japan I: Nagoya part 1 →

2 thoughts on “A quick insight on cards”