My Plug in Baby 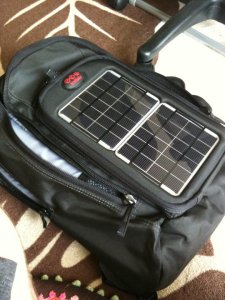 As one of my first posts here, I want to talk about something I’ve recently become very interested in. ECO products and going off the grid. It all started after the Tohoku Earthquake in northern Japan on March 11th. The country was in chaos, the people downtrodden . . . but at the same time the volunteer spirit sparked for the first time in Japanese people since the great Hanshin Earthquake in the 90’s. I really wanted to go up and volunteer in the quake affected areas, but doing so would have lost me my job and put my life in Japan in jeopardy.

I did what most of the other people did . I donated money. Probably not nearly enough but I did what I could. In the months following the quake, the electricity supply in the Kanto region (which is composed of Tokyo, Yokohama, and other prefectures around that area) was experiencing blackouts, brown outs, and a lack of energy in general. The government was asking people to conserve energy wherever they could. Summer was murder. One of the hottest in recent memory. Keeping the memory of the earthquake and the idea of wanting to conserve energy in mind, a seed took root in my head.

I wanted a solar backpack.

I knew I had heard of them before at tech shows around the world. Maybe it was at CES in Las Vegas the other year that I first learned they existed. I then went on a hunt for solar backpacks. I searched on Amazon.co.jp. I did some google searches and found a few different companies and did my research. Out of everything that was available at the time of my purchase, and for what I wanted my solar back pack to do, I thought that Voltaic Systems (http://www.voltaicsystems.com/) backpacks were the way to go.

The main reason I wanted the backpack was for emergencies. If there was another earthquake and all I could bring was this backpack, I would still be able to use my phone, wifi internet, recharge other people’s phones, and also be able to carry food and other necessities. I ended up deciding on the Converter Solar Backpack. I found that they were being sold on Rakuten (Japan’s Amazon rival), through a company called “Planet Earth” out of Ishikawa (I believe). It was around 17,000 yen I think, which is a little steep but at this point I was totally focused on picking up a solar back pack.

Finding good sunlight when I’m at home can be a pain, but usually over a few days of morning sunlight I can get a full charge. Whenever I go on vacation I take it with me (saves me the trouble of having to buy foreign adapters to charge things), whenever I ride my bike around town I take it with me . . . it’s really become a part of me. I’ve recharged my PSP, DS, and iPhone more than enough times with it. I don’t know how much electricity I’ve saved by using it, but that’s beside the point. If something bad happened, I’d be ready for it and could help others out as well. One of the biggest needs after the earthquake was cell phone rechargers. Nobody could get in contact with the outside world without it. Solar backpacks would have been extremely useful.

Plus the idea of being able to use electronics anywhere in the world was pretty cool too. If you have some cash, use a lot of electronics from day to day, and want to not have to worry about always being connected to the power grid somewhere, I definitely recommend checking out their products! I hope they open up a store in Japan in the future. Where’s the best place to do it you think?

But of course, the electric city . . . Akihabara (in Tokyo). But I’ll leave that for another day and another post. Thanks for reading.

One thought on “My Plug in Baby”