Home for the Holidays

So I’m back home for the holidays. I’m making my first post from my iPhone to see how it turns out. Been to my Dad’s, mom’s, did some shopping and met up with a few friends. As you know I’m addicted to Magic and being home hasn’t stopped that.

I had tons of great cards sitting in previously made decks and while home I decided to take them all apart as well as organize my commons. I’ve made a little progress as you can see and still have a long way to go. I plan on bringing back some old cards for friends, some current standard cards (with the old art) and I’m also looking to sell some cards on Card Kingdom before I head back. It’s exciting to see what I have since I’ve long forgotten what was in my collection since moving to Japan. 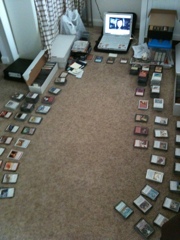 Sorting through my card collection 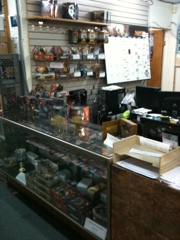 The counter at Fantasy Games

I also went to my local card shop The Griffon as well as Fantasy Card and games (picture above). Both are great shops, featuring tons of books and Magic cards, and a very good selection on board games such as Settlers of Catan. The price of single packs at The Griffon is a little cheaper than Fantasy Games, but fantasy has a lot more singles on sale, as well as commons, uncommons, etc. For Magic Fantasy is the way to go in South Bend. They also have a website here I believe. From time to time they have some great deals on single cards, and update their prices twice a week I believe.

My take on USA Vs. Japan MTG

So I played my first ever standard event in the USA at FNM at Fantasy games. This is the deck (my U/R Titan deck) I’ve honed in Japan against their meta game with skills acquired IN Japan. How’d I do? Well I finished 3-2 and was quite happy with both my play and the cards. I lost to a tempered steel and a human deck, but dominated against vampires and birthing pods. My deck caught a lot of people off guard and hit really hard a few times (12 dmg from a swiftfoot boots equipped inferno Titan a few times!). I might play again but I’m not sure yet. The play style in Japan is definitely different though and I’ll be posting more thoughts on this comparison later.

Well, people are finally waking around the house so Xmas day has started! Thanks for reading and have a merry Christmas!