What the Helvault?!?! (Pre-release info and first Impressions of Avacyn Restored)

Is anybody else getting excited about Avacyn yet? Do the cards seem overpowered or what?? There are going to be so many possibilities for the meta game it’s going to be chaos the first few weeks after Avacyn begins. I’m really liking the new Planeswalker Tomiyo, and think she’ll fit into a White/Blue control deck rather nicely. Throw in some Feelings of Dread (tap 2 creatures) and a Jace’s Erasure (when you draw a card, a player mills the top card off of their library), and suddenly that -2 ability looks amazing. Draw cards and tap out! That new Alabaster Angel that attaches Aura’s to it also looks amazing and would work well in that deck with some Angelic Destinies.

All of the Legendary angels are great, and I believe people will be building decks around them to support their abilities. Vexing Devil (4/3 for one red mana) is amazing, and I really like that the “flicker” mechanic is making a comeback. Works great with the Titans while they are still in Standard format. Aside from WU Control, I think We’ll see some Heartless Summoning/Demon/Token decks, and some White/Red Angel-Human Burn decks too. There are going to be a lot of possibilities. I’ll be sure to post more combo ideas and reactions in the next few days as more cards are released, but for now I want to move onto the main topic of this post. 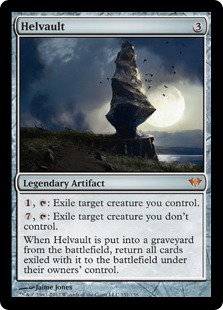 What lies inside of the Helvault???

I’m really excited about the Helvault promotion. I want to help open it up during the prerelease and hopefully receive some really cool swag. For Dark Ascension, lots of people received things like playmats and other gaming accessories, so I hope its some of the same and more. I think EVERY store should be participating in this event, but sadly this isn’t the case. If you are going to do the pre-release on April 28th and/or April 29th in Nagoya, here’s what you need to know. Please understand that each tourney will be with Japanese cards only, and it will be up to you to print out the spoiler list or put it on a PDF file that can be used on your smartphone.

And that’s all the information I have for now. If you live near a different gaming location in Japan and want to add to this list, please be my guest and leave the information in the comments.

And one more thing about selling cards in to these locations in Japan. Anybody can sell cards at these locations as long as you have a passport, foreigner card, or Japanese Driver’s License. Some places will even take foreign driver’s licenses. I am also working on updating selling information such as where their “buy” lists are located in the store and what kind of cards they will buy so you don’t waste your time going there if you have older cards. Be sure to check out the store profiles tomorrow to see the updated info!

← Upcoming features and articles on TheJapanHobbyist and updates
Tibalts are Red and Tamiyos are Blue . . . →

One thought on “What the Helvault?!?! (Pre-release info and first Impressions of Avacyn Restored)”