Today were the Magic World Cup Qualifiers in Nagoya, Japan. 155 players came from all over Japan for the last chance to earn a spot on Team Japan for the World Championships. There were players from Ishikawa, Kyoto, Tokyo, Osaka, Wakayama, Mie, and of course Nagoya participating. But with only one spot up for grabs, the day was bound to end in heartbreak for some people. 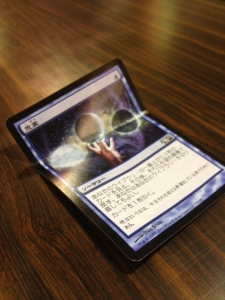 Don’t Ponder your fate too much, or this might happen..

There were quite a few original and rogue decks at the event. UG Infect, WR Tempered Steel, WBR Zombie Token Frites, and UW Planeswalker control all did well in the first few rounds. However, as the number of players dwindled to under 100, UW Delver and Naya/GR Beatdown decks picked off the stragglers and soon were were left with only 8 decks. 6 UW Delver decks, a Naya Angel Aggro deck, and a UB Heartless Summoning deck piloted by my friend from Mie, Shingo Yamada. 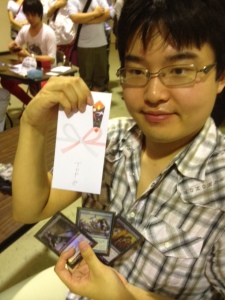 He was wracked with nervousness as he sat down to one of the Top 8 player tables, his arms shaking as he shuffled his deck. Who wouldn’t be? He was only 3 wins away from trip to the Magic World Championships! He took the first game from the Naya Beatdown deck by getting out two Heartless Summonings early and then proceeding to get out a bunch of Frost Titans and Phyrexian Metamoprhs to shut down his opponent. But in both the 2nd and 3rd game he was unable to draw any Heartless Summonings and was stuck with his heavy creatures in hand while his opponent ran over him with Blade Splicers and their Golems. Perhaps a mulligan would have helped . . .

Oh well, I’m still proud to know somebody who finished in the top 8. He finished with a 6-2-1 record on the day.

The quarterfinals were composed of 3 Delver decks and the Naya Beatdown deck. The Naya (WGR) deck was undone by Delver in the next round due to multiple Geists of St. Traft, Sword of War and Peace, and Vapor Snag. That left the Qualifiers with 2 Delver decks left in the final match. One was the Yuuya Watanabe UW Delver build being used by Mori Katsuhiro of Tokyo, and the other was an original UW Delver build by Yuuta Takahashi, also from Tokyo.

Mori-san piloted the Watanabe Delver to an undefeated 9-0-1 record going into the last match. He totally obliterated his competition most of the day, and had also earned some byes during qualifying matches before the event making most of the day a breeze. But how would he do against Takahashi-san?

Finals Table: The place where the top players faced off

Well, Takahashi was definitely prepared for for Delver today. Half of his sideboard was for Delver mirror matches, while the other was for Naya/GR Beatdown that was prevalent throughout most of the tournament. Yuuta’s record was 9-1 going into the last round, having just vanquished 2 Delver decks prior to this one. He was more than ready and had plenty of practice against Delver all day to set himself up for this match. His deck used none of the equipment in his main deck that most Delver players used, opting to throw in Blade Splicers instead for added punch. This much more aggro approach for Delver ended up being what he needed in order to overpower his opponents.

Swinging in with a Geist of St. Traft, a spirit Token, and a 4/4 Angel, Takahashi-san reduced his opponent’s life to one and then Vapor Snagged Katsuhiro’s remaining Delver for the kill. Exhausted, but overjoyed, Yuuta Takahashi secured the final spot in the next Magic World’s Championship. Congratulations Takahashi-san!

Read a full account of the qualifiers, profiles of the players, and see the decklists of the Top 8 on Star City Games.com sometime next week!

Until then, please feel free to check out my latest article on SCG.com about the metagame in Nagoya in June.

I don’t have ALL of the information for next weekend’s pre-release for M13 in Nagoya just yet, but I know about a few stores’ schedule.

I will update this post with information about Card Brunch, Mishimaya, and maybe even Hobby Station Meitetsu Eki if I have the chance. If you need directions ask or take a look at past articles for how to get there.

Before I finish this entry, don’t forget to look for my Magic World Cup Qualifier article in the next few days at Starcitygames.com if you’re interested in the deck lists! Monday will be the start of M13 pre-release week, so be sure to come back then for a new article! Thanks again for reading.