Next on the agenda is red. I think red has a lot of good sideboard cards and some killer rare/mythic cards, but must have commons/uncommons are few and far between. Feel free to offer your opinions otherwise, but I think compared to the other colors, red was shortchanged. Well, at least with creatures. While there are a lot of cards with Firebreathing like Furnance Whelp and Dragon Hatchling, I feel that the investment that you put into a Hatchling when you attack is too much. You have to pay that mana to deal any damage, and afterwards that mana is tied up and can’t be used until next turn. I just can’t myself choosing those cards over some lesser cost, more dynamic cards.  For example: 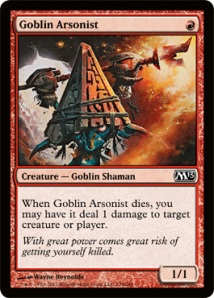 I’ve loved this guy since Eldrazi. Cheap, and can kill two creatures early on the game. Plus if you somehow get enough goblin cards for a goblin deck, it’s a great way to start your curve. You lead off with this card then you . . .

. . . then you cast this on your second turn. Three creatures by the 2nd turn isn’t bad. Good way to get in some quick damage. If you have the new Goblin guy Krenko, these cards would combo great with him. 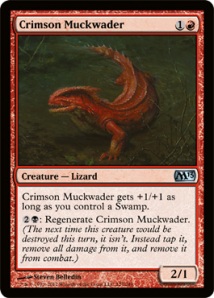 I think this guy isn’t bad. I wouldn’t choose him first, but if you’re running black and red he wouldn’t be a bad choice to put in there. A 3/2 that regenerates will definitely do some work for you, blocking creature or attacking when you need it to. But if you’re not using black, then his value drops. 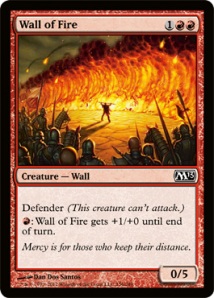 I’ve been playing since Revised edition, and I still have my old Wall of Fires at home. I don’t think this is a bad card, though it will probably serve as more of a sideboard card for you when you need it to block beefy creatures. Being able to pump it up also is good since it won’t just be sitting there taking damage. Again, I don’t think this will be something you’d put in your main deck, but it would be good to have against decks that use bigger creatures.

Flames of the Firebrand

It’s the closest thing you’ll get to a board wipe for cheap in a limited tournament (unless you pull a Magmaquake). If they have a few pesky 1/1’s pinging away at you, you can take them out. Otherwise, you could direct all of the damage at the player. The option to split the damage is useful. (Didn’t Pyrotechnics do the same thing back in the day?)

It looks like Act of Treason got an upgrade. This could be dangerous if you plan on giving the creature back to your opponent afterwards, but most likely you’ll be saving this card for a killing blow. You never know when your opponent will lay down a game ender like Sublime Angel, but with this card at least you can give them a taste of their own medicine.

The two red makes it difficult to splash, but this card can be a good finisher. The fact that it’s an instant is also good. If you’re running red and need to take out a bigger creature, this is pretty much your only choice.

I’m not feeling too confident about red cards in M13, at least not the commons. I think a lot of you will probably disagree with my choices. I don’t know, I just feel like Red is more support for other colors than being able to do anything on its own. If you can think of any other must use COMMONS or UNCOMMONS, please leave a comment. At the moment it’s difficult for me to see the synergy between red and the other colors, but if you can see some good combos let me know! Tomorrow I think I’ll do green, so be sure to check back. Thanks for reading and I hope to get more suggestions for useful cards!